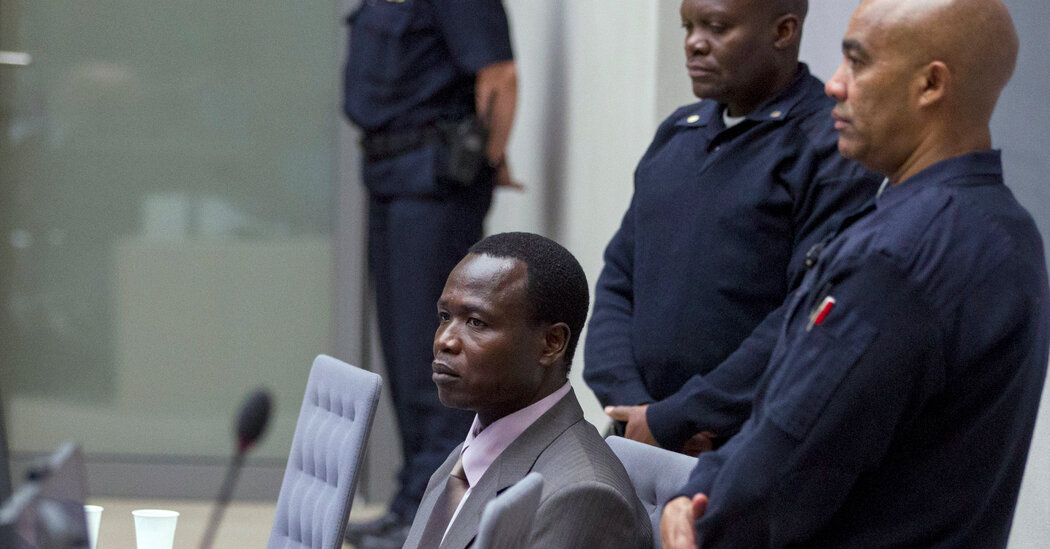 A former Ugandan rebel who was abducted as a child by the notorious Lord’s Resistance Army and later rose to be a commander of the militia was convicted of war crimes and crimes against humanity on Thursday at the International Criminal Court in The Hague.

The defendant, Dominic Ongwen, was a 9-year-old on the way to his village school in the summer of 1988 when armed L.R.A. fighters grabbed him and spirited him off to their camp, where he was beaten, threatened and trained as a child soldier.

Now in his early 40s, he faces life in prison on charges including rape, forced marriages, torture, enslavement and multiple murders. His case has stirred debate among lawyers and international law experts because the young Mr. Ongwen was a victim of some of the same crimes he was accused of, including the recruitment of child soldiers under the age of 15.

But in their final decision, the judges did not cite his childhood experiences as a mitigating factor.

His is the first trial of a top commander of the Lord’s Resistance Army, a group that waged a violent campaign across Uganda and several neighboring countries from the late 1980s until recently. The case brought to light a wealth of details about how the fighters brutalized and mutilated their perceived enemies. More than 4,000 victims were represented by lawyers as victims of his crimes in the case.

When the presiding judge, Bertram Schmitt, announced the verdict, he read out long list of cruelties that he said Mr. Ongwen had ordered.

“He gave instructions to loot food, abduct people, burn down the camp and the barracks,” Judge Schmitt said. “An old woman who could not carry her load was strangled and had her throat cut,” he added. “His men shot, beat and abducted civilians in the head and the face to make sure they were dead.”

Some children were enclosed in a bag and beaten to death, the judge said.

“A witness saw bodies hacked in a barbaric way,” he added, saying that the defendant had been described by his subordinates as an extremely skillful commander whom they loved to follow.

During the four-year trial, Mr. Ongwen’s lawyer argued that as a young boy, his client was so brutalized by militia fighters who turned him into “a fighting machine” that he never learned to distinguish right from wrong.

But the judge said that Mr. Ongwen “did not commit any crimes under duress.”

Human Rights Watch estimates that the L.R.A. kidnapped at least 25,000 children in Uganda alone. Fighting between the rebels and government troops displaced almost two million people from their homes in Uganda from 1987 to 2006.

But the rebels, driven out of Uganda in 2006, also terrorized villagers by looting property and animals and burning houses in parts of the Democratic Republic of Congo, South Sudan and the Central African Republic. A United Nations report estimated that 450,000 people were displaced in those countries.

The prosecution pointed out that Mr. Ongwen had never tried to escape his captors, unlike so many other boys and men. Instead, prosecutors said, he followed orders and relished his role, climbing the ranks to become one of the rebels’ top commanders.

He was accused of personally leading raids in which his brigade looted property and animals, burned homes and abducted adults and children to used as forced labor. Boys were trained as fighters, and girls were exploited as sex slaves and domestic workers.

The verdict capped a trial in which scores of witnesses — both former soldiers and their victims — gave their versions of Mr. Ongwen’s role in the rebel army campaigns against thousands of villagers whom the militiamen saw as government supporters and enemies.

“This is a milestone for the victims of so much brutality,” Elise Keppler of Human Rights Watch, who has long studied the rebel group, said before the verdict was delivered. “Justice is so hard to achieve. This is the first opportunity for people to see these notorious crimes recorded and judged before a court.”

The L.R.A.’s bloody rampages and its elusive leader, Joseph Kony, are notorious. In the region, many admired and feared Mr. Kony, who claimed to have mystical powers.

Mr. Ongwen’s fighting career lasted more than 25 years, but his trial focused on attacks on refugee camps in northern Uganda from 2002 to 2005, because prosecutors had the strongest evidence for those accusations.

The trial did not cover the group’s many subsequent attacks or its rampages through four other countries in East and Central Africa.

Thursday’s proceedings, streamed from the court, were eagerly awaited in viewing sites set up in northern Uganda, where many communities were affected by the fighting. Some groups have regularly followed the trial via special radio broadcasts.

Prosecutors relied on recordings of radio intercepts and satellite calls by the rebels, along with military logbooks and intelligence reports provided by the Ugandan government. Both the prosecution and the defense brought forward scores of witnesses who spoke of their experiences as former fighters or as rebels’ forced wives who bore children against their will.

The court has also issued a warrant for Mr. Kony. He was last seen in 2020 in a remote region of South Sudan. The United States has offered up to $5 million as a reward for information leading to his arrest.