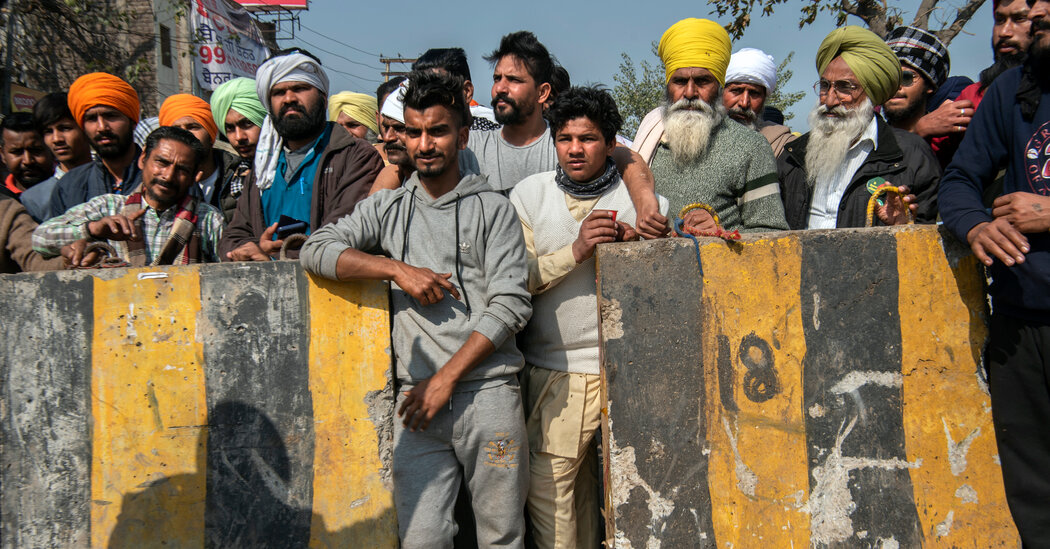 NEW DELHI — First came the accusations of foreign infiltration. Police complaints against protest leaders followed, as did arrests of protesters and journalists. Then the government blocked internet access in places where demonstrators gathered.

As India’s prime minister, Narendra Modi, struggles to quell months of protests by farmers against new market-friendly agriculture laws, critics and analysts see a pattern of curtailing free speech that they fear is sending India down a dangerous path of intolerance.

In its response to other contentious policies — including citizenship laws that disadvantaged Muslims, its clampdown on the disputed Kashmir region and the farmers’ protests — Mr. Modi’s government has resorted to arrests, stifling of dissenting voices, and blocking of the internet. Groups that track internet freedom say India’s is slipping.

While some of the tactics are not new in India’s recent history, many fear Mr. Modi is taking them to new heights.

Gyan Prakash, a professor of history at Princeton University, said the closest parallel was in the 1970s, during the period that in India is called emergency rule. The prime minister at the time, Indira Gandhi, curbed civil liberties, imprisoned political opponents, and shut down the news media.

“But the B.J.P. onslaught is also very different and even more damaging to whatever remains of democracy in India,” he said, referring to Mr. Modi’s governing Bharatiya Janata Party.

He cited what he called a creeping dismantling of the pillars of democracy under Mr. Modi, from the coercion and control of the mainstream media to influencing of the courts.

“Critics often call it an ‘undeclared emergency,’” said Mr. Prakash, who has written a book about the emergency rule era. “It is much worse and more damaging in the long term, because the arrests and the denial of bail to detainees is an assault on whatever remains of the institutions of the rule of law.”

The efforts have drawn growing international condemnation, from human rights groups and internet personalities alike. A tweet by the pop star Rihanna in support of the farmers dominated Indian social media on Wednesday, prompting a response from pro-Modi entertainers in India urging unity and denouncing outsider voices as trying to divide the country.

The foreign ministry released a rare statement that addressed the tweets without naming anyone specifically.

“We would like to emphasize that these protests must be seen in the context of India’s democratic ethos and polity,” the ministry said. “The temptation of sensationalist social media hashtags and comments, especially when resorted to by celebrities and others, is neither accurate nor responsible.”

As the government and its most devoted supporters grow increasingly watchful, people across the country are becoming more cautious about what they say.

On television channels, critics choose their words carefully to avoid making an offensive statement. A stand-up comedian remains in jail, denied bail, for a joke the police have yet to prove he made. Journalists and opposition politicians have been taken to court because of tweets that the authorities label “misleading,” or for reporting accounts that challenged the government’s version of events.

In Uttarakhand, a state run by Mr. Modi’s party, the police chief said that his forces would be watching social media posts for “anti-national” posts and that passport applications could be denied to anyone who had posted such content.

In the state of Bihar, which is led by a Modi ally, the police said applicants would be barred from government jobs if they were found to have participated “in any law and order situation, protests, road jams etc.”

The showdown between the government and the farmers, who had peacefully camped out at the borders of New Delhi for two months demanding the laws be repealed, turned chaotic and violent last week, during a tractor procession into the city by farmers. At least one person died in what police said was a tractor accident. Hundreds of police officers and farmers were wounded.

While the farmers claimed the violence was part of a government conspiracy to derail their movement, officials quickly used it as evidence that the protest needed to be dismantled. Dozens of police complaints were lodged against the farm leaders. Some journalists at the scene were arrested, while others were dragged to court on charges of “misleading” tweets for reporting protesters’ claims that the man who died was shot by the police.

Since then, the police have erected barricades and barbed wire and even planted spikes in concrete to prevent movements toward New Delhi. The government has intermittently cut off electricity and water to one of the camps, before cutting off internet at all three, and restricted journalists’ access to them.

This week, Twitter temporarily suspended dozens of accounts related to the farmers’ protest, including the account of The Caravan, a narrative reporting magazine that has been closely covering the demonstrations. A freelance journalist writing for The Caravan was also arrested, the magazine said.

Twitter confirmed that it had suspended the accounts because of “a valid legal request” from the Indian government. It subsequently reinstated the accounts, it said, after informing the government that it considered the contents to be acceptable free speech.

“This kind of barricading — this is not the Pakistani border,” said Mahender Singh Dhanger, 65, a protesting farmer at the Ghazipur protest site, referring to the heavily fortified border with India’s nemesis.

Gopal Krishna Agarwal, a spokesman for the B.J.P., said the decision to restrict the internet and erect the barricades was a “police administrative move.” The party has said opposition politicians had criticized the force over its soft handling of the chaos during the tractor procession.

“It is more than 70 days,” he said. “If you look to the historical ways other countries and government have been dealing with protests, you will see the marked difference.”

The protesters “crossed all limits” on Jan. 26, Mr. Agarwal added, “but still the prime minister has said he is ready to talk to the farmers anytime, anywhere.”

Some protesting farmers believe the government’s stronger hand may work against it.

The violence during the Jan. 26 tractor march raised questions about the future of the protest movement. But the farmers appeared to be galvanized by the efforts last week to arrest Rakesh Tikait, a protest leader whom police have accused of being involved in the violence.

As the security forces surrounded the Ghazipur protest site that night, Mr. Tikait cried on the stage and threatened to hang himself rather than go to jail. His emotional outburst was widely shared on social media, drawing more supporters from the villages who began pouring in over a matter of hours. Protester numbers appear to have grown despite the internet cuts.

If past protests are an indication, those punished by the police could have a long ordeal ahead of them.

After protests in Kashmir in 2019, many of the political leaders in the region, who had long supported the Indian state, remained under house arrest for months. Twenty-one protesters and activists who campaigned against the citizenship law in New Delhi are still held, a year later, under a stringent law called the Unlawful Activities Prevention Act. They have been repeatedly denied bail, except for a pregnant woman who was granted bail on humanitarian grounds.

Mahavir Narwal, the father of Natasha Narwal, a doctoral student and activist arrested last year on accusations of rioting, said her trial had been delayed repeatedly, with the police telling the court that they were gathering more evidence. He said the use of the draconian law and the delay of trials was a tactic to drive fear into anyone thinking of protesting.

“If you are arrested under these charges,” Mr. Narwal said of the unlawful activities act, “the bail is almost impossible.”

Mujib Mashal reported from New Delhi and Sameer Yasir from Srinagar, Kashmir. Reporting was contributed by Hari Kumar in Ghazipur, India, and Adam Satariano in London.