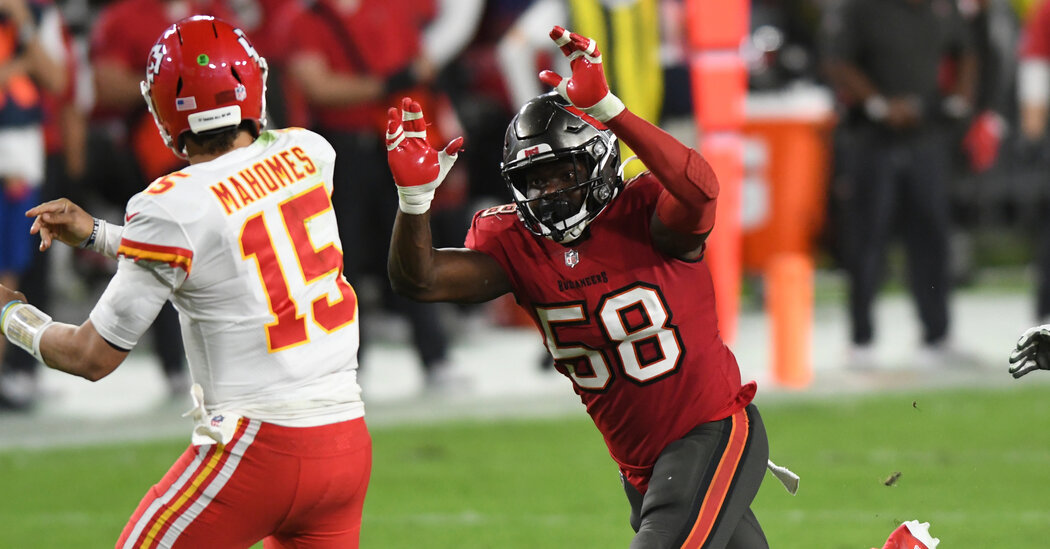 They’re big. They’re fast. Sometimes they can seem a little mean. Each one has Super Bowl experience and, come Sunday, they just might be Tampa Bay’s best chance of stopping Patrick Mahomes from winning a second consecutive championship.

But the most surprising thing when you watch Shaquil Barrett, Jason Pierre-Paul and Ndamukong Suh dominate for the Tampa Bay Buccaneers is the realization that each of them, at one point in their career, was deemed expendable.

You would hardly guess it — particularly after watching them torment Aaron Rodgers throughout an upset of the Green Bay Packers in the N.F.C. championship game — but each of them also came to Tampa Bay with metaphorical hat in hand, looking for a fresh start.

Suh, a five-time Pro Bowler, was three seasons into an enormous contract with the Miami Dolphins when he was released in 2018, and after helping the Los Angeles Rams make that season’s Super Bowl, Los Angeles made no attempt to re-sign him. Pierre-Paul, with a laundry list of big moments and scary injuries, was coming off an uneven 2017 season when the Giants, as part of a move to a 3-4 defense, decided he was a bad fit and traded him to the Buccaneers for a third-round pick. And Barrett, ever the understudy to stars like Von Miller in five seasons with the Denver Broncos, walked away from a team that never found a role for him.

Over the past two seasons, those three players — along with linebacker Devin White and the mammoth defensive tackle Vita Vea — have powered the Buccaneers to an average of just under three sacks a game. Barrett, who had 14 sacks in five seasons with Denver, has 27.5 in two years with the Buccaneers. Pierre-Paul, who adjusted just fine to a role as an outside linebacker in a 3-4 scheme, has 18 sacks in the last two seasons despite missing six games.

In the Bucs’ win over Green Bay two weeks ago, Barrett and Pierre-Paul accounted for all five of Tampa Bay’s sacks.

The group has gone from being discarded by their old teams to becoming the savvy veteran leaders of a defense that is particularly young in the secondary. And beyond the group’s obvious talent on the field, Barrett, Pierre-Paul and Suh have also proved to be leaders by sharing their life experience with the team’s younger players.

“Without question,” Suh said when asked if there were things to learn from past struggles. “The tough times leave a lasting impression of something you don’t ever want to revisit again.”

For Pierre-Paul, those struggles have included back surgery, the loss of his right index finger in a fireworks accident in 2015, and a car accident in 2019 that left him with a fractured vertebra in his neck.

Pierre-Paul recounted his various comebacks with some lighthearted banter. He said growing up with a blind father gave him an excellent role model for resiliency, and he chastised the voters for not putting him in the Pro Bowl in 2019 after he came back from a broken neck to record 8.5 sacks in 10 games.

“With all the things that I’ve been through, I’m overachieving,” he said. “I’m letting everybody know that no matter what you go through, you can do whatever.”

Coach Bruce Arians said Pierre-Paul’s obstacles had made him an ideal leader.

“He plays with a heart that is as big as a lion and high, high energy,” Arians said. “Guys just love playing with him. He doesn’t speak a lot because he lets his play do the talking, but when he speaks, everybody listens.”

Tom Brady, who lost to Pierre-Paul and the Giants in the Super Bowl after the 2011 season, said he liked being the star defender’s teammate rather than his opponent. And he agreed with Arians about Pierre-Paul’s leadership.

“J.P.P. is absolutely like a ringleader in that group,” Brady said. “When he’s going, everyone is going.”

The question now is if all of that life experience, and all of that talent, can translate into Tampa Bay’s front seven creating the disruptions necessary to slow down Mahomes.

While he does not run the ball very often, Mahomes is evasive in the backfield, using his legs to create separation and his arm strength to make up for having moved outside of the pocket. He is rarely sacked, and his ability to throw under pressure negates any advantage of a blitz: To Mahomes, a blitz just means there is one fewer defender in coverage. So Tampa Bay’s best bet may be to go after him with a four-man rush, a point that was repeated several times by each of the defensive stars.

“He’s just got it — he’s got it all,” Barrett said of Mahomes. “So we’re going to try to keep him in a pocket. That’s why the way we rush is perfect with me and J.P.P.”

Helping matters is the Chiefs’ being without several offensive linemen. Laurent Duvernay-Tardif, a starting guard, opted out of the season. Right tackle Mitchell Schwartz hasn’t played since Week 6, guard Kelechi Osemele hasn’t played since Week 5 and left tackle Eric Fisher tore his Achilles’ tendon in the A.F.C. championship game. Center Daniel Kilgore has missed practice all week; he is isolating away from the team after a close contact with a person infected with the coronavirus, but he is expected to be cleared to play on Sunday.

A few injuries — not a broken neck among them — did not draw much sympathy from Pierre-Paul.

“I don’t care; it don’t matter,” Pierre-Paul said. “This is the freaking Super Bowl. I’m going to do what I need to do. That’s a ‘you’ problem. They need to figure that out.”

For as confident as they are, and for as much opportunity as they have to influence the outcome of Sunday’s game, Tampa Bay’s star defenders took plenty of time to praise Mahomes as a worthy opponent. Barrett went as far as to wade in on the GOAT vs. Baby GOAT debate, in which some have suggested that Tom Brady should share his Greatest of All Time nickname with Mahomes.

Barrett thinks Mahomes is well on his way to earning that distinction, but he argues that the Buccaneers defense, with a pass rush led by him, Pierre-Paul and Suh, can help slow down the passing of that torch. While Mahomes is hoping to collect a second Super Bowl ring, Brady is one win from his seventh.

“We’ve just got to tell him he ain’t ready to be the big GOAT yet, because we still got Tom Brady,” Barrett said. “So we’ve got to step it up and make sure Tom Brady gets another one.”