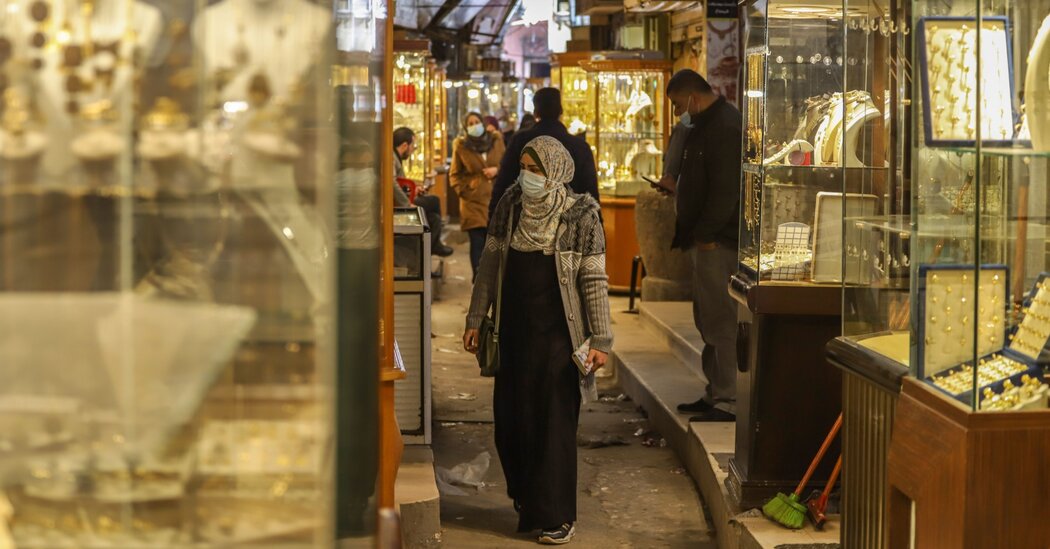 JERUSALEM — Israel quickly became the world leader in vaccinating its population against Covid-19, but almost all Palestinian residents of the occupied West Bank are still waiting for their first doses of the inoculation.

That disparity has set off a roiling debate about Israel’s responsibilities as an occupying power in one of the world’s most protracted territorial feuds.

To Israel’s critics, international law obligates Israel to give Palestinians access to vaccines comparable to what it offers its own citizens. But supporters of Israel’s policies contend that the Palestinians assumed responsibility for health services for their population when they signed the Oslo Accords in the 1990s.

While the Palestinians’ glaring vulnerability to the virus lessened somewhat this week — the Palestinian Authority officially launched a vaccination campaign by giving frontline medical workers doses received from Israel — the contrast with Israel remains striking. The disparity also reflects in part the stark inequality in access to vaccines between rich countries like Israel and other areas of the developing world.

The Palestinian vaccine campaign still lags far behind that of Israel, which with a population of about 9.2 million has already inoculated more than 3.3 million people with a first dose. They include a substantial percentage of the roughly 450,000 settlers living alongside Palestinians in the West Bank, who number between 2.5 million and three million.

It remains unclear precisely when the roughly two million Palestinians in Gaza, the blockaded enclave controlled by the militant anti-Israel group Hamas, will begin to receive vaccinations.

For the small number of Palestinian doctors and nurses who received vaccines on Wednesday, it was a moment of relief.

“Praise God, I feel great,” said Ayman Abu Daoud, 49, a nurse based in Bethlehem who has been administering coronavirus tests over the past 11 months. “The vaccines are giving us hope we will overcome the pandemic, but we still have a long way to go.”

Bassil Bawatneh, the director of an eye hospital near Ramallah that has been transformed into a coronavirus treatment center, called the vaccination of medical teams “a very crucial step.”

The Palestinians received their first substantial shipment of vaccines this past Monday when Israel gave the Palestinian Authority 2,000 Moderna doses — a measure the Israeli government approved after public health experts had recommended it. Israeli officials said they intend to hand over an additional 3,000 doses.

On Tuesday, the Health Ministry of the Palestinian Authority said the vaccination campaign would initially target frontline health workers and then expand to people above the age of 60 as well as those who suffer chronic illnesses.

The Palestinians received 10,000 doses of Russia’s Sputnik V vaccine on Thursday. They expect to receive 37,440 Pfizer doses in February and hundreds of thousands of AstraZeneca doses in either late February or early March through the global-sharing initiative Covax, according to Gerald Rockenschaub, the head of the World Health Organization’s mission to the Palestinians. An additional two million doses of AstraZeneca are slated to arrive throughout March, Palestinian officials said.

The Palestinian Authority’s health minister, Mai al-Kaila, had said vaccines would be transferred to Gaza on Wednesday, but Israeli security officials said that the Palestinians had not submitted a formal request for permission to send vaccines there. Any request would require Israeli government approval, the officials said.

The launch of the vaccination campaign in the West Bank followed a fiery disagreement between supporters of the Israelis and Palestinians about whether Israel bears responsibility to vaccinate Palestinians.

Human rights advocates have argued that Israel is obligated under international law to provide Palestinians with access to vaccines on par with what it makes available to its own citizens. Some also argue that Israel has a moral imperative to do so as a military occupier with the means to help.

Advocates have pointed to the Fourth Geneva Convention, which states occupying powers hold a duty to ensure the public health of people living under occupation to “the fullest extent” possible, especially with regard to combating epidemics and diseases.

“After 50 years of occupation with no end in sight, Israel’s duties go beyond offering spare doses,” said Omar Shakir, Human Rights Watch director for Israel and Palestine, referring to the vaccine vials Israel delivered to the Palestinians on Monday.

Mr. Shakir emphasized that Israel must provide vaccines to the Palestinians irrespective of efforts by the Palestinian Authority to secure them independently and said it was unjustified to afford settlers greater access to vaccines than their Palestinian neighbors.

But Israeli officials have said that while Israel has an interest in ensuring the vaccination of Palestinians, many of them laborers who frequently come into contact with Israelis, it has no legal responsibility to do so.

Currently more than 150 million people — almost half the population — are eligible to be vaccinated. But each state makes the final decision about who goes first. The nation’s 21 million health care workers and three million residents of long-term care facilities were the first to qualify. In mid-January, federal officials urged all states to open up eligibility to everyone 65 and older and to adults of any age with medical conditions that put them at high risk of becoming seriously ill or dying from Covid-19. Adults in the general population are at the back of the line. If federal and state health officials can clear up bottlenecks in vaccine distribution, everyone 16 and older will become eligible as early as this spring or early summer. The vaccine hasn’t been approved in children, although studies are underway. It may be months before a vaccine is available for anyone under the age of 16. Go to your state health website for up-to-date information on vaccination policies in your area

You should not have to pay anything out of pocket to get the vaccine, although you will be asked for insurance information. If you don’t have insurance, you should still be given the vaccine at no charge. Congress passed legislation this spring that bars insurers from applying any cost sharing, such as a co-payment or deductible. It layered on additional protections barring pharmacies, doctors and hospitals from billing patients, including those who are uninsured. Even so, health experts do worry that patients might stumble into loopholes that leave them vulnerable to surprise bills. This could happen to those who are charged a doctor visit fee along with their vaccine, or Americans who have certain types of health coverage that do not fall under the new rules. If you get your vaccine from a doctor’s office or urgent care clinic, talk to them about potential hidden charges. To be sure you won’t get a surprise bill, the best bet is to get your vaccine at a health department vaccination site or a local pharmacy once the shots become more widely available.

That is to be determined. It’s possible that Covid-19 vaccinations will become an annual event, just like the flu shot. Or it may be that the benefits of the vaccine last longer than a year. We have to wait to see how durable the protection from the vaccines is. To determine this, researchers are going to be tracking vaccinated people to look for “breakthrough cases” — those people who get sick with Covid-19 despite vaccination. That is a sign of weakening protection and will give researchers clues about how long the vaccine lasts. They will also be monitoring levels of antibodies and T cells in the blood of vaccinated people to determine whether and when a booster shot might be needed. It’s conceivable that people may need boosters every few months, once a year or only every few years. It’s just a matter of waiting for the data.

“We want everyone in the area to be vaccinated, but the Palestinian Authority is the party responsible for providing for the health of Palestinians,” said Yoav Kish, Israel’s deputy health minister. “Our responsibility is to vaccinate our own population,” he said, noting that Israeli health care providers were inoculating Arab citizens of Israel and Palestinian residents of East Jerusalem.

Defenders of Israel’s policies have argued that Israeli officials moved more quickly than their Palestinian counterparts in securing deals for vaccines.

The Palestinian Authority did not initially lead public calls for Israel to vaccinate Palestinians.

Ahmad Majdalani, the minister of social development, said the Palestinians did not publicly demand that Israel give them vaccines at first because they thought they would obtain what they needed through international donations, contacts with pharmaceutical companies and private discussions with Israeli officials.

When it became clear their strategy was not producing immediate results, Mr. Majdalani said they decided to start issuing statements demanding Israel fulfill its “international duty” by providing vaccines.

Last week, Nabil Abu Rudeineh, a spokesman for Palestinian Authority President Mahmoud Abbas, said international law requires Israel to provide vaccines to the Palestinians, but that Palestinians were still working “to find every path to find whatever vaccine possible — whether it is English or Russian or Chinese.”

Ghassan Khatib, a political scientist at Birzeit University, argued that the Palestinians initially refrained from publicly calling on Israel to give them vaccines because they were loath to sound “self-contradictory,” seeking to obtain them independently while simultaneously ceding responsibility to Israel.

Hussein al-Sheikh, the main Palestinian official in charge of coordinating with the Israelis, said the Palestinians asked Israel for up to 10,000 doses in late December.

Public health experts said they were most worried that Palestinians may hesitate to be vaccinated.

“There is a lot of false information on social media making people fearful of getting vaccinated,” said Abdulsalam al-Khayyat, the head of the public health department in An Najah University’s medical school in Nablus.

Mr. al-Khayyat predicted that about half of the Palestinian public was uncertain about receiving a vaccine, and he said that achieving herd immunity would not be possible without convincing a wide section of Palestinian society to be inoculated.

“Making sure the public gets vaccinated is the biggest challenge we are facing right now,” he said.