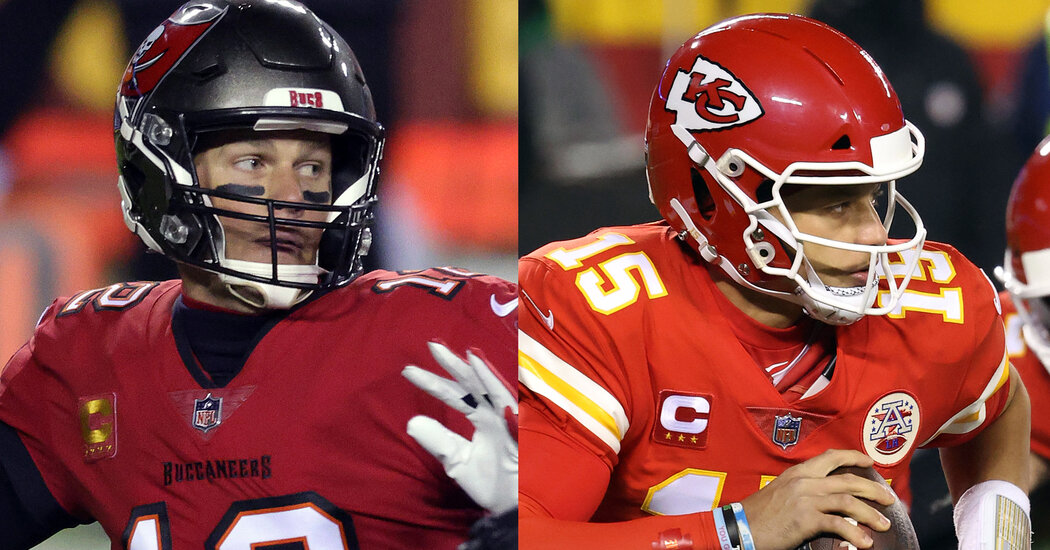 Tom Brady and Patrick Mahomes function within the same general constructs that have governed the N.F.L. for more than a century — playing on a field measuring 360 by 160 feet, accompanied by 21 other players, trying to gain 10 yards in four downs.

Their approaches, though, are a gulf apart, with each quarterback at the pinnacle of styles that define the modern offensive era. Brady, 43, is a pocket passer extraordinaire, an archetype that is waning as teams try to build around dual-threat quarterbacks like Mahomes, 25, who can lead the dynamic offenses that have reimagined how football is played in 2021.

For as much as either player seems to be a representative of their generation, a model to be copied, the truth is their singular brilliance cannot be replicated.

Brady has won six Super Bowls — and appeared in three others — by shredding defenses with his arm, his eyes, his brain. Mahomes, though, captures what it means to play entertaining football in 2021. He deploys more arm angles than an octopus, dodges defenders with glee and can throw 60 yards off his back foot, skills he has displayed in a bid to become only the second quarterback to win two Super Bowls in his first four seasons.

The other? Brady, of course.

To understand their distinctive artistry ahead of Super Bowl LV, we evaluated the key points of the difference between how Brady and Mahomes attained their successes this season.

Tom Brady flourishes inside the pocket. Patrick Mahomes wreaks havoc outside it.

Today’s N.F.L. puts a premium on agile quarterbacks. Gone are the days when a passer could stand still in the pocket behind a protective wall of offensive linemen and not expect to be crushed by defensive linemen and edge rushers.

The quarterbacks who flourish against pressure now either launch the ball quickly and with deadeye precision, like Brady, or they evade and elude like Mahomes, extending plays to create lanes to run or pass, stressing defenses with possibility.

Mahomes’s improvisational aptitude means opponents don’t know whether he’ll run or pass — only that he can produce special outcomes with both. Defenses pressure quarterbacks to unnerve them and goad them into mistakes, but with Mahomes, the more chaos churns around him, the better he plays.

“Once the play breaks down,” Buccaneers linebacker Lavonte David said of Mahomes, “he finds a way to make the play happen again.”

In the 2020 regular season and playoffs, Mahomes posted a league-best 126.7 passer rating when teams rushed with at least five players, according to the sports data service Sportradar. Against the blitz, Mahomes completed a greater percentage of passes than Brady did (67.3 to 58.9), and he also outshined him in yards per attempt (8.8 to 7.8) and touchdowns (14 to 12) while throwing no interceptions to Brady’s six.

Outside of the pocket, Mahomes can throw from anywhere on the field, at any time, using an array of arm slots — sidearm flicks, underhand spirals, even left-handed. Plotted together, the locations from where he throws in the course of a game look like an unfinished paint-by-numbers, scattered from sideline to sideline. By contrast, Brady’s points of release clot in a central location — the pocket, where he is most comfortable and assertive.

“I’m a fan of Patrick Mahomes,” Buccaneers quarterbacks coach Clyde Christensen said, “but I don’t want Tom to play like him Sunday.”

Brady and Mahomes command the N.F.L.’s two most prolific and explosive passing offenses by targeting their teammates in completely different ways.

The Chiefs prefer to maximize their fleet of pass-catchers by spreading out defenses, creating mismatches — and space — for their leading receivers, Tyreek Hill and tight end Travis Kelce. Loaded with run-pass options, which prod defenders into hesitating or overcommitting because they can’t discern what’s coming, the Chiefs’ offense teems with creativity.

Kansas City’s receivers always seem open, and by getting them the ball in space Mahomes enables them to run — and run and run. His average completion netted 5.8 yards after the catch (YAC), fourth in the league, and no matter which position Mahomes threw to, or how long the pass itself traveled, according to Football Outsiders and Sports Info Solutions, his passes led to significantly more YAC than Brady’s.

One reason? The Chiefs excel at breaking tackles. Kelce — who ranked second in the league in YAC — broke 26 on receptions, while Hill had 17, according to Football Outsiders and Sports Info Solutions. The top Buccaneers receiver, Mike Evans, broke just seven tackles.

The Buccaneers’ taller, refined receivers run their routes and beat their defenders at the moment they’re about to grab the ball, so a significant share of Brady’s passing yards are accrued when the receiver makes the catch itself. His 7.3 yards per reception at the catch ranked second in the N.F.L., according to Sportradar, echoing Coach Bruce Arians’s “no risk it, no biscuit” philosophy.

Brady signed with Tampa Bay in March amid conjecture that he couldn’t throw deep regularly anymore. When Christensen, his new quarterbacks coach, watched film of him before the Buccaneers pursued him in free agency, he came away positive that Brady had the arm strength, and the downfield accuracy, to thrive in their field-stretching offense.

Improving as the season progressed, Brady led the league in attempts, completions and touchdowns — and interceptions — on passes that traveled at least 20 yards in the air, according to Sportradar. However, Mahomes was more efficient downfield than Brady, completing a greater percentage of passes (36 to 34.1) with nine touchdowns and no interceptions.

“We faced so many deep coverages with teams, where they’re taking way all our deep throws,” Mahomes said. “I had to learn when to just to take what’s underneath, and that’s something where I’ve kind of grown and matured.”

Both Brady and Mahomes can change the game quickly.

Three-tenths of a second. The difference is imperceptible to the naked eye but that’s how much more time, on average, Mahomes takes than Brady to throw the ball.

Brady’s average release time of 2.4 seconds, according to Pro Football Focus, reflects what Arians called his “fast-twitch reactionary” brain. Before the ball is snapped, Brady anticipates defenses so well, and gets such outstanding protection from his offensive line, that he is able to get rid of the ball at the third-fastest rate in the N.F.L. among qualified quarterbacks (those who took half their team’s drop-backs) even as he throws deep passes regularly.

Those differences in delivery inform which routes Brady and Mahomes connect with in the passing game. The two share the same three most-frequent routes to throw to, according to Football Outsiders and Sports Info Solutions — curls, flies and outs — just in different incidences. Mahomes threw to curl routes 111 times this season, with Brady showing less impartiality among the three.

But they then diverged, with Brady preferring digs and finding a greater variety of deep routes while Mahomes fancied mayhem, completing 45 passes when the designed play was a busted and he had to freelance. For Brady, broken plays didn’t even crack his top 10 most favored routes.