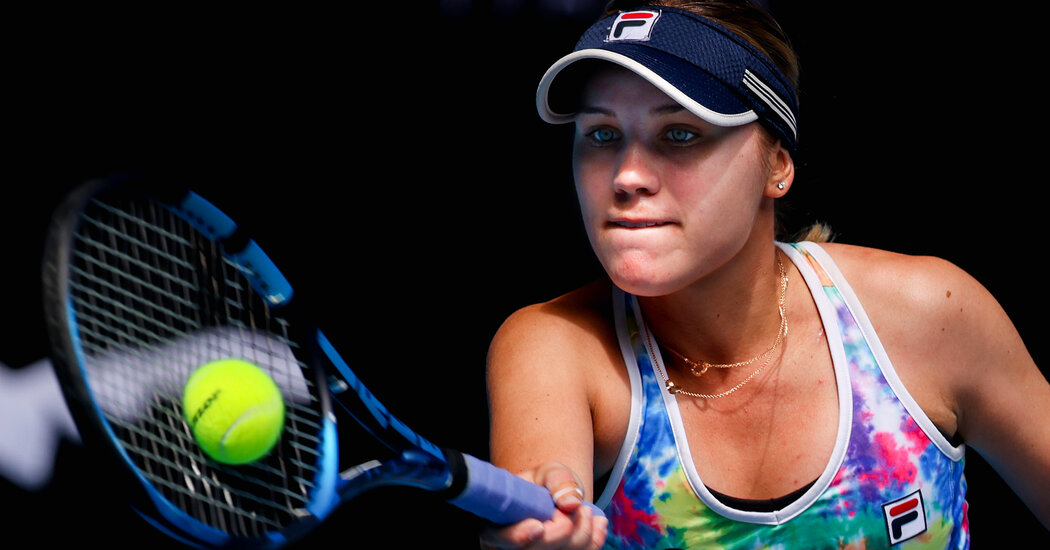 Sofia Kenin had just beaten Ashleigh Barty, the world No. 1, to reach the final at the Australian Open last January. Still in her tennis clothes and seated on a bench in the locker room next to her friend and doubles partner, Bethanie Mattek-Sands, Kenin glanced at her phone and put her hands to her mouth.

“Andy Roddick just tweeted. Oh my God, Oh my God,” Kenin said as she read aloud the former world No. 1’s message. “‘This girl has become the goods,’” Roddick wrote, urging her to win the title.

“I will,” Kenin yelled into her phone. Then she cried.

Kenin, 22, met Roddick when she was a 7-year-old Florida phenomenon playing exhibition matches with the former world No. 1s Jim Courier and Venus and Serena Williams. She told a reporter that she knew how to return Roddick’s 150-plus m.p.h. serve by split-stepping and hitting with a short backswing.

Tears have become Kenin’s mantra. She cried from nerves before every match during last year’s Australian Open and then sobbed with joy after she beat Garbiñe Muguruza to win her first major title.

She fought back tears of frustration in the middle of her French Open final-round loss to Iga Swiatek and then let them flow as she sat courtside during the trophy presentation.

Kenin entered last year’s Australian Open ranked outside the top 10. Helped by a potent backhand down the line, a well-disguised drop shot and an unwavering will to win, she ended the Covid-truncated season ranked No. 4 and was named the WTA Player of the Year.

The following conversation has been edited and condensed.

What’s with all the tears?

I don’t know. I try to handle it. I can’t go on the court crying because then it’s a big advantage for my opponent, so I have to wipe my tears, have a good warm-up, feel the ball and then start grooving in the game. That’s when I forget I was crying and just focus on the points.

Do you cry before every match?

I did in Australia last year. I wasn’t doing it on purpose, it was just happening. And then, I’m superstitious so I was like, I got to cry. I’m not a good actress.

In last year’s final, you were at 2-2 in the third set, down 0-40 on your serve, and you hit five straight winners. How did you do that?

Yeah, yeah, I know those points. I just watched them on TV again, and I got a little emotional. Those were really clutch points, probably the best points of my life.

Novak Djokovic, your fellow Australian Open defending champion, became an inspiration for you last year. How did he help?

I was watching his match, and I messaged him on Instagram. I was hoping he would win so I would have an excuse to congratulate him. Then he was on the practice court next to me the day before the final, and he came up and gave me some advice. He just told me to enjoy the moment and leave it all out there. I think I’m going to ask him how to handle the pressure of being a defending champion. He’s got a lot of experience with that.

Not long after you won in Australia, the tour was shut down for five months because of the pandemic. Did that make you angry?

It hit me hard because it was supposed to be the best thing that ever happened. Three months of practicing and everything canceled.

I wasn’t in a depression, but I was really down. I didn’t want to be on the court. But when we started again, I was super excited to go out and compete, even though it was really unfortunate that there were no fans.

I’m definitely happy that I get to experience being a defending champion. That’s quite special. Then, I’m most afraid to lose and lose early.

How are you different from that wide-eyed 7-year-old who wanted to return Roddick’s serve?

Well, I won a Slam, and I got to the final of another one. So that’s a big difference.