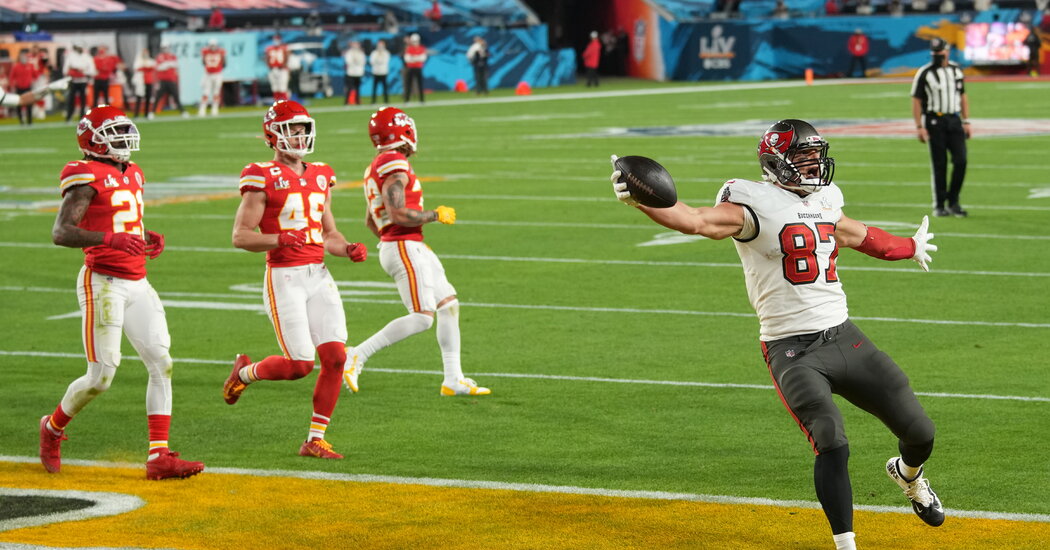 In an amusing television commercial for T-Mobile that aired in the days before the Super Bowl, Tom Brady and Rob Gronkowski spoofed how they both ended up playing for the Tampa Bay Buccaneers this season.

The ad pretends to go back in time a year, with Brady calling Gronkowski for advice on whether to retire. Gronkowski recommends retirement, but because of a bad wireless connection, Brady hears the opposite — and also thinks that Gronkowski wants to return to football and play with him in Florida. So that is what happens.

It was funny for everybody except the Kansas City Chiefs, who certainly were not laughing Sunday when Brady and Gronkowski seemed to turn back the clock not one year but a decade. Their honed, or cosmic, connection was the headlining collaboration that buried the Chiefs in the Buccaneers’ 31-9 victory in their home stadium.

Afterward, even Gronkowski was awed by the turn of events in roughly 12 months.

“It’s unreal, surreal, man,” he said. “It has to be one of the greatest accomplishments in sports history.”

Brady threw two touchdowns to Gronkowski in the first half as the Buccaneers took a commanding 15-point lead at halftime. They were the 13th and 14th touchdowns for the duo in the postseason, an N.F.L. record.

At the start of the third quarter, after Kansas City cut its deficit by three points, there was Gronkowski poking the defending Super Bowl champions in the eye again. He slyly slipped into the middle of the field uncovered so he could snag another Brady pass and rumble through defenders for a 25-yard gain that set up another Buccaneers touchdown, crushing the Chiefs’ hopes.

In the end, it was another example of what Brady brought with him when he left the New England Patriots behind in March and surprised the pro football world by alighting in Tampa, where playoff success was an 18-year-old memory — a Super Bowl win after the 2002 season. Brady was brilliant and precise Sunday, completing 21 of 29 throws with three touchdown passes and winning the Super Bowl’s Most Valuable Player Award for a fifth time, and it is now that much clearer how he can lift an entire franchise with his determination, talent and consequential presence.

But Brady can also apparently revive careers other than his own. At the end of the 2018 season when Gronkowski retired at age 29, he said: “Football was bringing me down, and I didn’t like it. I was losing that joy in life.”

Roughly a month after Brady signed with the Buccaneers, Gronkowski helped engineer a trade from the Patriots to Tampa Bay. According to Buccaneers Coach Bruce Arians, Brady was adamant about wanting Gronkowski, his former tight end from New England, on his new team. Sunday, Gronkowski said he and Brady had several talks in that period.

“So I came down to Tampa Bay and it’s just been an unbelievable story,” Gronkowski said.

At first, their reunion was treated like an amusing sideshow, especially because the likeliness that Brady would succeed after relocating was treated with skepticism as well. The cynicism began to have a mocking tone when Tampa Bay won only three of its first five games and Gronkowski had just 12 catches for 140 yards. Even Brady looked subpar and confused by his new role.

All that was irrelevant late Sunday evening after Brady led the Buccaneers on an unforeseen eight-game winning streak — four victories to end the regular season and four in the postseason. Along the way, there was Gronkowski, finishing the regular season with 45 catches for 623 yards receiving and seven touchdown catches.

As the Buccaneers advanced through the playoffs, there had been talk that Brady, 43, had found the long rumored fountain of youth in Florida. Apparently, he let his favorite tight end have a few sips, too, because on Sunday Gronkowski, 31, looked like he was 22 again.

A little more than four minutes into Sunday’s game, with Tampa Bay driving, Brady turned to his left and saw Gronkowski open in the flat. The pass hit its target in stride and Gronkowski, who is 6-foot-6 and 265 pounds, accelerated away from two defenders to dash into the end zone untouched. The 8-yard score put the Buccaneers ahead 7-3, a lead they never relinquished.

About halfway through the second quarter, Gronkowski worked free near the back of the end zone and Brady fired a bullet, a rising pass that can be hard to corral in traffic. But Brady and Gronkowski have executed on that connection countless times in practices and games. With practiced ease, Gronkowski leapt and secured the catch for a 17-yard touchdown.

Gronkowski said the play originally called for him to go to the right corner of the end zone but he darted left to find more open space. “Tom saw that and put the ball where I could go get it,” Gronkowski said. “Something like that goes back to the chemistry we’ve built over the years.”

The Buccaneers have a wealth of top young wide receivers, but perhaps it was not surprising that in the final, most important game of the season, Brady looked for his old reliable friend most often, throwing in Gronkowski’s direction seven times. Six of those passes were caught as Gronkowski racked up a team-high 67 yards.

On the sideline late in Sunday’s game, Brady and Gronkowski, teammates both old and anew, embraced repeatedly as the final seconds wound down.

“We did it,” Gronkowski yelled.

Brady smiled and slapped Gronkowski’s back as the two hugged yet again.

It would have made a good scene for a television commercial.