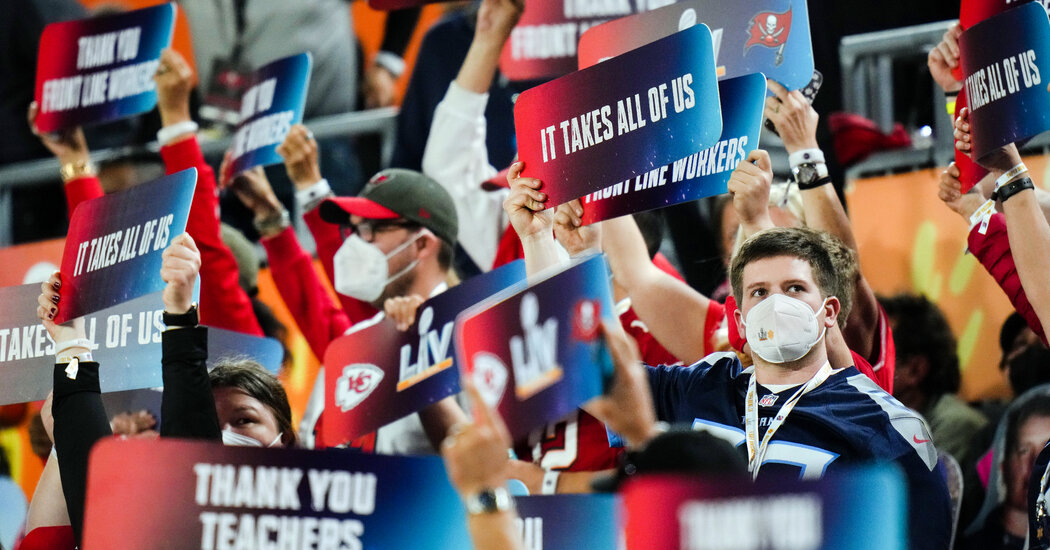 The N.F.L. likes to project power and precision. Sideline catches are scrutinized with zoom lenses, first downs are measured in inches and Air Force jets fly over stadiums just as “The Star-Spangled Banner” reaches its peak.

But when it comes to topics like race, health and safety, the league’s certainty dissolves into a series of mixed messages.

That was the case on Sunday at the Super Bowl, the N.F.L.’s crowning game, which is typically watched by about 100 million viewers in the United States. The championship game provides the league a massive platform each year to promote itself as America’s corporate do-gooder, with the best interests of its enormous fan base at heart. That was harder to do this year as the country remained roiled by the deadly coronavirus pandemic, which has exacerbated festering political division and racial unrest, issues the N.FL. had to plow past to complete its season.

On Sunday, at Raymond James Stadium in Tampa, Fla., the N.F.L. trumpeted its support for the fight against social injustice. The national anthem was performed by two musicians, one Black and one white. The poet Amanda Gorman, who wowed the country with her recitation at President Biden’s inauguration, read an ode to the three honorary captains — a teacher, a nurse and a soldier — frontline workers in different fields. The TV announcers spoke often of the work that the league and the players have done to battle racial inequities.

Yet, moments later, when the Kansas City Chiefs took the field, the N.F.L. played a recording in the reduced capacity stadium of the made-up war cry that is a team custom. The prompt got fans to swing their arms in a “tomahawk chop,” an act that many find disrespectful and a perpetuation of racist stereotypes of the nation’s first people. Last week, the Kansas City Indian Center, a social service agency, put up two billboards in the city that read, “Change the name and stop the chop!”

“At the start of the game it was all unify, unify, unify, and then there’s this racist chant,” said Louis Moore, an associate professor of history at Grand Valley State University who studies connections between race and sports. “Eight months after George Floyd, and you’ve done all this stuff, letting players put phrases on the backs of their helmets, giving workers a paid holiday for Juneteenth. They are putting a corporate Band-Aid on a problem instead of dealing with it.”

Moore pointed to other inconvenient realities that were either dismissed, ignored or obscured by the relentless messaging.

There was scant mention of Colin Kaepernick, the former San Francisco 49ers quarterback who has not played since the 2016 season, when he began kneeling during the national anthem to shine a light on police brutality.

That led to a sharp, viral rebuke on Twitter from the singer Mariah Carey.

There was little talk of the league’s abysmal record hiring people of color as head coaches and general managers even as television cameras showed the Chiefs’ successful offensive coordinator, Eric Bieniemy, who is Black and has been unable to land a head coaching position in multiple hiring cycles.

Before the game, CBS Sports showed a segment that featured Viola Davis, the Academy Award-winning actress, saluting Kenny Washington, a Black player who in 1946 reintegrated the N.F.L., which had an unofficial color barrier for 13 years.

Yet there was no discussion of a lawsuit brought by two former N.F.L. players who accuse the league of rigging the concussion settlement to make it harder for Black players to receive payments.

The league spent considerable time lauding nurses and other health care workers on the front lines who have been helping fight the coronavirus. It had invited 7,500 vaccinated workers to the game, a signal to Americans that if you, too, get inoculated, you will be able to safely attend big events like the Super Bowl.

Not discussed was that just hosting the Super Bowl could lead to a spike in the number of infections. Sure, the N.F.L. provided fans at the game with face masks and hand sanitizer, but little if any contact tracing was done to monitor exposure. Tracking infected fans will be made all the more difficult as people return to their homes in all corners of the country.

The Super Bowl, American sports’ biggest party, is not confined to TV and phone screens. The week of events leading up to the game was a magnet for tens of thousands of fans who attended parties or flocked to Tampa’s bars and restaurants, often unmasked. In the aftermath of the home team’s victory, mask-less revelers took to the streets of Tampa, an utterly predictable scene that has followed other major championships. Many of the people who celebrated without regard to social distancing or other guidelines will expose others to the virus as they travel home.

For all the N.F.L.’s feel-good words and gestures to this moment in American history at the Super Bowl, and its attempts to use football to try to bring the nation together, the league’s carefully crafted message risked being muddled by its actions.