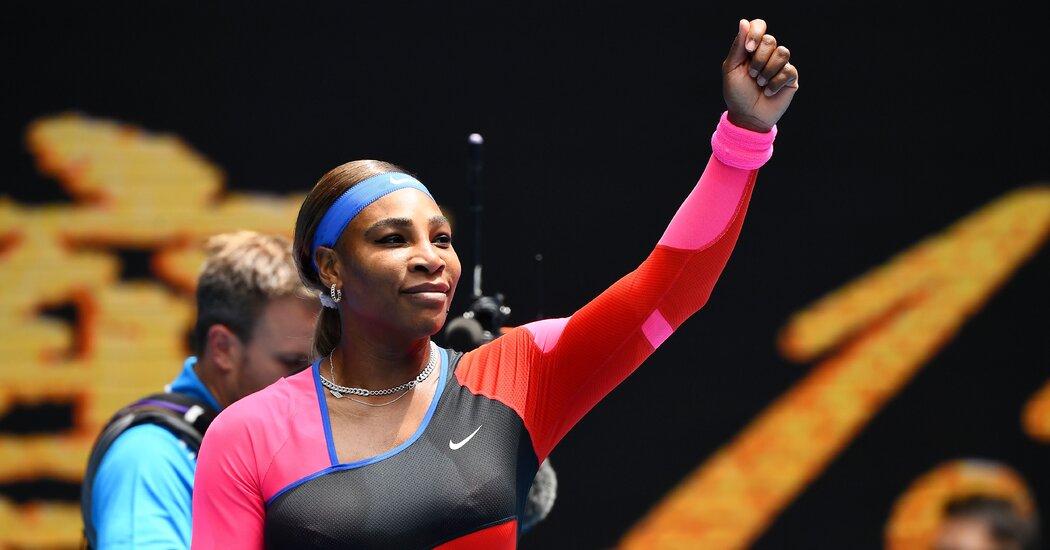 MELBOURNE, Australia — As fans fished for autographs by tying cords around oversize tennis balls and dangling them over the rail for Serena Williams, her mind drifted to the other side of the world.

“How amazing!” Williams muttered, as much to herself as anyone else, while she scribbled her signature after her 6-1, 6-1 first-round victory against Laura Siegemund at the Australian Open on Monday. “Can you imagine winning the Super Bowl at 43?”

In the lead-up to this year’s Open, Williams, 39, had repeatedly expressed her admiration for Tom Brady, the Tampa Bay Buccaneers quarterback who delivered his seventh Super Bowl title on Sunday night. His determination and excellence have inspired her “since when he beat Kurt Warner,” she said, referring to the New England Patriots’ victory over the St. Louis Rams in the Super Bowl in February 2002.

Brady’s only misstep, Williams joked last week, was his choice of teams last year as a free agent. “I mean, he just should have come to the Dolphins, really,” said Williams, who owns a minority stake in Miami’s N.F.L. franchise along with her sister Venus.

Williams sees in Brady a kindred spirit, someone whose appetite for competition and desire to succeed have not receded over time. “I look at Tom Brady, it’s so inspiring,” she said.

With his latest title, his first outside New England, Brady brought to a boil the long-simmering debate about sports’ greatest athlete. That discussion must include Williams, a 23-time major winner whose next Grand Slam singles title will tie Margaret Court’s career record.

And Williams may be the only member of the greatest-ever debate to have won one of her titles while pregnant. She delivered her daughter, Alexis Olympia Ohanian, via an emergency C-section on Sept. 1, 2017, nearly seven months after she won the Australian Open. She said they haven’t spent a day apart since.

“Is that healthy?” Williams said Monday. She laughed. “Not at all. Not even close. But every single day I just want to be around her.”

Williams’s choice to be a doting parent, come hell or hard quarantine, may be where her path most clearly diverges from Brady’s. Two weeks before the Super Bowl, Brady was reportedly alone in his Tampa mansion, having sent away his wife and three children so he could give his undivided attention to football for the 12 days leading to the big game.

Two weeks before the Australian Open, Williams was finishing a mandatory 14-day self-isolation, which required her to hole up in a hotel for 19 hours a day with her husband, the tech entrepreneur Alexis Ohanian, and their high-spirited daughter.

Williams acknowledged that Brady’s preparation made more sense, but said, “I wasn’t strong enough to do the banishment.”

She added: “I would not have been able to function without my 3-year-old around. Not even close. I think I would be in a depression.”

Elite athletes typically don’t do much in their downtime on the days or weeks in which they are competing, preserving their energy for the bursts of effort their sports demand. For Williams, the accelerating and downshifting processes are compressed. She’s a drag racer, going in a flash from mama to megastar.

One of her matches at a tuneup event last week at Melbourne Park ended just after 8 p.m., leaving Williams caught in parenting territory similar to the terra incognita between the service line and baseline. Olympia’s bedtime was 8:30. Should she rush back to tuck in her baby or go through her usual postmatch paces and make peace with not seeing her daughter until the morning?

Her instinct was to rush home. “But I’m a little torn,” Williams said in her postmatch news conference that day. “I’m like, maybe I should just let her go to bed so she doesn’t get too moody.”

Williams added: “She’s too hyper. She needs her rest. She’s a busy kid. She has a fully booked schedule.”

Before another of Williams’s matches last week, Ohanian walked to his seat. In his arms he carried a squirming Olympia, who pointed to Williams on the court and said, “Hey, that’s my mama!”

Williams said her daughter knows that the court is her office. But does she assume every working woman plays tennis? Williams isn’t sure. Sometimes when Olympia attends matches or practice sessions, she’ll freak out Williams by mimicking everyone else and calling her Serena.

Williams’s second-round opponent will be a 24-year-old Serb, Nina Stojanovic, who was younger than Olympia when Serena won the first of her 73 WTA Tour titles. Stojanovic would do well to tune out the player introductions Wednesday since it requires a sizable chunk of the six-minute warm-up period to recite Williams’s achievements.

“When the announcer said on the court, ‘23 Grand Slam titles, seven Australian Opens,’ he was like, ‘14 doubles titles,’ then he starts talking about mixed doubles, I’m like jeez,” Williams said last week.

But none of what Williams has done matters as much to her as what is left to accomplish. When Brady said before the Super Bowl that his favorite championship is his next one, it resonated with Williams. “That would absolutely be my answer, for sure,” she said.

“Because otherwise you’re living off of what you already did,” she said.

That mind-set is why Williams can conduct a tour of the trophy room in her house in Miami, as she recently did for Architectural Digest, and struggle to identify which trophies are from which tournament.

It was why she is unbothered that one of her seven Wimbledon trophies disappeared after a party she threw with Venus several years ago. Or maybe it was one of Venus’s five that vanished. “Was that my Wimbledon trophy or was that her Wimbledon trophy?” Williams said. “The argument is still going on.”

She added wryly, “Conversations in the Williams home.”

Since her daughter’s birth, Williams has appeared in four Grand Slam finals but has yet to win one. With her next Grand Slam title, she can show everybody, as Brady did Sunday in Tampa, that she still has the power to amaze.

“You can’t say it was the system he was at formerly,” Williams said, referring to Brady’s six Super Bowl titles under Coach Bill Belichick in New England. But she knows better. “It’s definitely Tom Brady.”