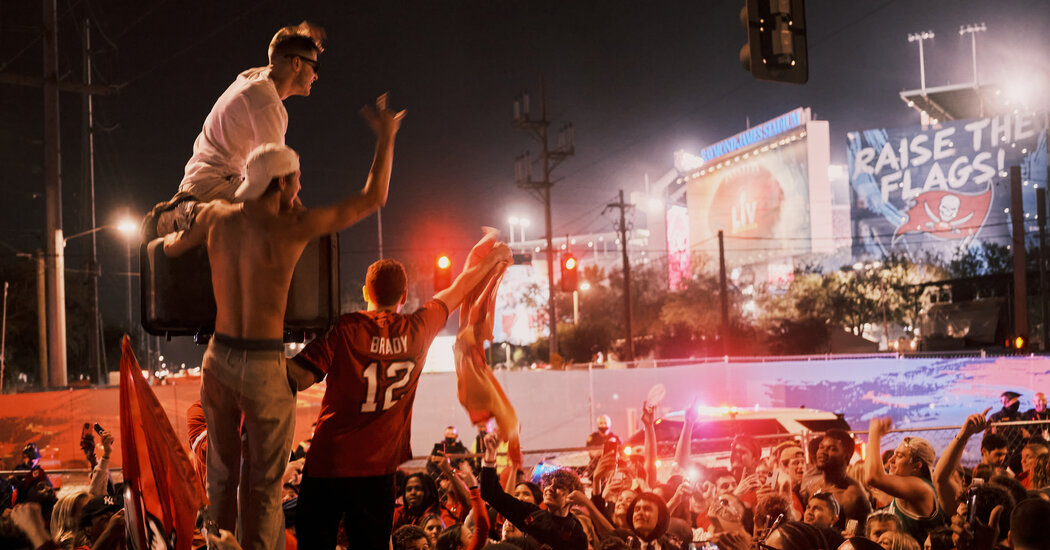 The streets of Tampa, Fla., teemed with boozy revelers into the wee hours of Monday, many of them ignoring pleas by medical experts to social distance and wear masks, after the Buccaneers crushed the Kansas City Chiefs in Sunday’s Super Bowl. A few scrums broke out.

In one of the more bizarre episodes, a man in a red T-shirt and shorts climbed a small tree in the city’s South Howard district, known as SoHo, and rocked back and forth as hundreds of fans egged him on, a video taken by Juan Carlos Chavez, a reporter for The Tampa Bay Times, showed.

The man later appeared to be taken into custody by the police after people in the crowd started shoving each other, a subsequent video showed. At least one police officer appeared to get knocked to the ground.

It was not immediately clear how many people were arrested after the game, which ended just after 10 p.m. local time, or whether the police issued any citations for violations of a temporary ordinance requiring people to wear masks at several popular outdoor spots in the city.

The Tampa Police Department did not immediately respond to requests for comment on Monday morning.

About two hours after the scuffle near South Howard Avenue, a convoy of police cars moved through the street in an apparent attempt to disperse the crowd. Smoke could be seen billowing in another video taken by a local reporter.

In Ybor City, another part of Tampa known for its nightlife, a sea of people partied late into the night. In videos, few were wearing masks and it was not immediately clear whether any efforts had been made to disperse the crowd. A television reporter characterized the scene as “one massive dance floor.”

The scene of thousands of fans tightly packed into the city’s streets and outside Raymond James Stadium represented an alternate universe from the steady warnings by the nation’s top health officials about the risks of the Super Bowl becoming a super spreader event. It also came amid growing concerns that variants of the coronavirus, including one first found in Britain, have become more transmissible.

Inside the stadium, the home field of the Buccaneers that typically holds about 66,000 people, capacity had been limited to 22,000 spectators for the game. The empty seats had been filled with cardboard cutouts of fans who could not attend the Super Bowl, but paid $100 to have their photos present.

Outside the stadium, there appeared to be far less of an emphasis on social distancing and wearing masks. Maskless fans in jerseys tailgated, waving Buccaneers flags and listening to music.

After the game, which Tampa won 31-9 over the Chiefs, last year’s champions, a group of fans surrounded a Kansas City team bus. Many of those in that crowd also did not appear to wearing masks. Officers on motorcycles cleared the crowd for the bus to be on its way.