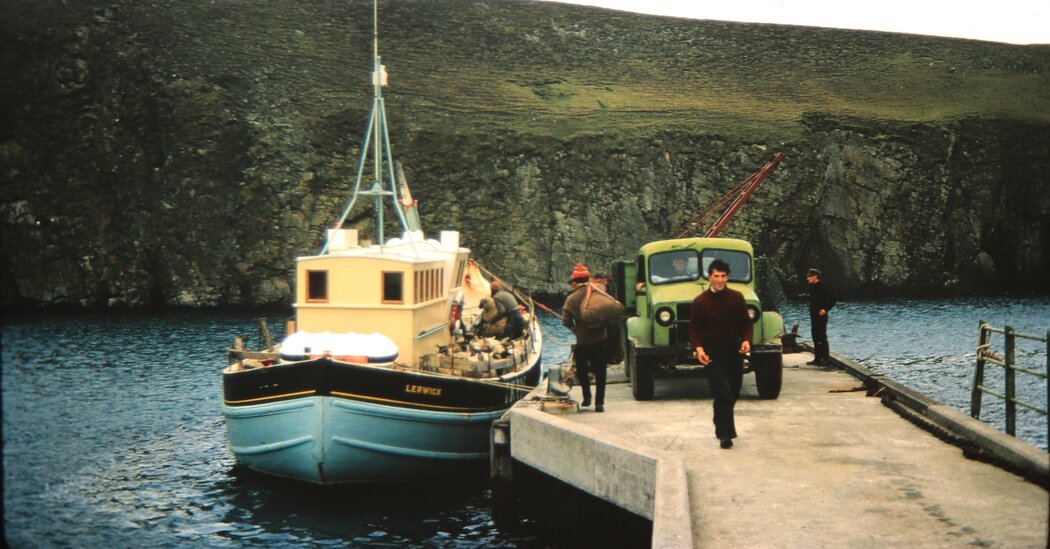 LONDON — After working for years at a recycling center in the Shetland Islands, at the northernmost reaches of the British Isles, Paul Moar is used to helping the public get rid of unwanted items.

But when an older man walked into the recycling center in Lerwick, the capital of the archipelago in the North Atlantic, carrying two large bags heaving with old photograph slides, he quickly realized that this intended trash might be worth keeping.

In the bags, he found a wealth of old pictures of the Shetland Islands taken in the 1960s and ’70s — old farmers shearing sheep by hand, views of dirt roads winding between small stone houses, and fishers rowing small dinghies ashore.

“My jaw hit the ground,” said Mr. Moar, a local history buff. “Some of them were these amazing snapshots into island life, and other ones were just scenic photos,” he said. “But I knew I’d stumbled on a little bit of treasure.”

In the days since, Mr. Moar has worked on digitizing the 300 images, tracked down the photographer and shared dozens of the pictures online. There, they have proved a sensation for residents of the islands, which have a population of just 22,000 or so, who have helped piece together when they were taken, identified the people in the photographs, and shared their own memories of the islands.

In the process, they’ve become an unexpected bright spot in the midst of the coronavirus pandemic and restrictions that have left people feeling isolated.

“I certainly was in the right place at the right time,” Mr. Moar said, adding that the photographs offered a rare, intimate glimpse into everyday life decades ago in an island community.

“I think it’s giving people a little ray of light, you know, at a dark time,” Mr. Moar said. “It’s been lovely, not just to save the photos, but to see people enjoying it as much as they have.”

Through a neighbor, Mr. Moar reached out to Nick Dymond, the local resident who dropped off the bags and who took the photographs, and with his permission, uploaded a number of the images to a Shetland memories Facebook group.

Overnight, dozens of people were leaving messages and helping to identify the people featured, chiming in with notes on family homes and sharing memories of places they spent time as children.

“That must be 40 years ago when we were so young!” wrote Gillian Okill, after someone tagged her in one of the pictures.

“My Dad’s boat on the right, named after me,” Mairi Thomson wrote alongside a photograph of the harbor.

“If only those days were back again,” Frank David Simmons wrote about one image, where he shared memories of farming with limited machinery.

One member of the Facebook group where Mr. Moar first shared the images said it was “giving everyone such a boost in these dark times.”

Mr. Moar said his own passion for the history of the islands — where his family can trace ancestors back to the 1400s — was what had initially drawn him to save the pictures.

The rugged Shetland Islands sit about 110 miles north of mainland Scotland, some 190 miles west of Norway. More than half of the islands’ residents live within 10 miles of Lerwick, and the rest are scattered in communities across 16 other inhabited islands — though there are around 100 small islands in total in the archipelago.

Mr. Dymond, 77, was surprised by the fuss over his old photographs but said in a phone interview that he was happy that others were able to enjoy them.

“I was just doing a clear out,” he said of his decision to take them to the dump. “I had these three large boxes of slides in my very small house for, well, 30 years or close to it.”

Mr. Dymond was a prolific photographer who loved to document his travels, including to places such as India, Kenya and Russia, but he said he had never made the switch to digital and no longer had the slide projector to view his old pictures.

“I can’t do anything with them, and I’ve already seen all the things that I’ve taken photographs of,” he said with a chuckle. “But I realized other people are enjoying them.”

Mr. Dymond is originally from Bedford, England, but in the 1960s, he made his home on the Shetland Islands. He first moved to Fair Isle, the southernmost island in the group, and in the 1970s, he began leading bird and wildlife tours in the summers. He served as a warden for the Royal Society for the Protection of Birds, a charity, and later wrote a book on birding in the islands.

Mr. Dymond that viewing the photographs was a journey back into small moments of his life that he had not thought of in some time.

“There’s ones that sort of bring back memories for me in a personal way,” Mr. Dymond said of the images. “And it’s a bygone era. Some people won’t know who the people in the photographs are and they are trying to find out, and there are a few that I don’t know either.”

One of his favorites is a photograph of a farmer kneeling to feed a lamb, taken on the tiny island of Fetlar, which had a population of just 100 during the seven years that Mr. Dymond lived there. He recognized the man, Lollie Brown, a neighbor, who died years ago.

“He was just a wonderful man,” he said. “That was a great reminder for me.”

Mr. Dymond gave permission for the slides to be donated to the Shetland Museum and Archives, and Mr. Moar plans to take them there once the site reopens after coronavirus restrictions ease.

Mr. Moar said he hoped they could serve as a reminder of the simplicity of life on the islands.

“Life is slower here,” he said. “But these old photos are certainly a window into a past era where life was, people would say, more real and more tangible.”