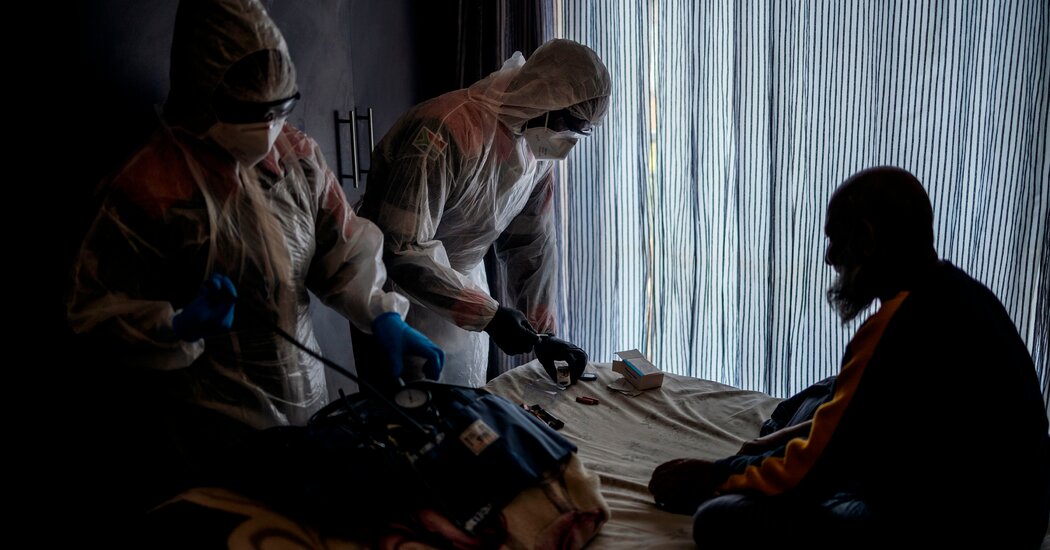 The infectious disease doctor in Johannesburg thought that he and his country would only have to hold on a little longer.

A million doses of the AstraZeneca-Oxford vaccine had arrived from India. The first injections were set for Wednesday. After weeks of rich countries vaccinating doctors and nurses against the coronavirus, a respite from the anxiety and the trauma seemed to be nearing in South Africa, too.

Then, all of a sudden, the plans were shelved. The country’s leaders on Sunday ordered the rollout of the vaccine halted, after a clinical trial failed to show that it could prevent people from getting mild or moderate cases of Covid-19 caused by the coronavirus variant that has overrun the country.

“It was a real body blow,” the infectious disease doctor, Jeremy Nel, said. “The promise of a vaccine, albeit quite delayed compared to many other countries, was a light at the end of the tunnel.”

The new findings from South Africa were far from conclusive: They came from a small clinical trial that enrolled fewer than 2,000 people. And they did not preclude what some scientists say is the likelihood that the vaccine protects against severe disease from the variant — a key indicator of whether the virus will overwhelm hospitals and kill people.

But even if the vaccine is shown to prevent severe disease, scientists say, what happened in South Africa is a warning to the world. As quickly as scientists developed vaccines, the virus has seemed to evolve even more quickly. Instead of eradicating the virus, scientists now foresee months, if not years, of vaccine makers continuously having to update their booster shots to protect against new variants.

And if the variant first seen in South Africa, now present in 32 countries, becomes the dominant form of the virus elsewhere, those countries could face a far slower crawl out of the pandemic.

“It’s becoming increasingly apparent that we’re going to be stuck in this whack-a-mole reality, where we have variants that don’t respond to vaccines,” said Andrea Taylor, the assistant director at Duke Global Health Innovation Center. “We’ll try to tweak those vaccines to target new variants, but because the virus will still be able to spread in some populations in some parts of the world, other variants will pop up.”

The news was not all bad. Other vaccines offer some protection against the variant from South Africa, though less than against earlier versions of the virus. Among them is Johnson & Johnson’s vaccine, which prevented hospitalizations and deaths in clinical trials in the country. Despite not yet being authorized there, it could be rolled out to some health workers by mid-February as part of what officials vaguely described as “a research project.”

AstraZeneca is working to produce a version of its vaccine that can protect against the variant from South Africa by the fall.

Still, the findings rattled scientists, undercutting the notion that vaccines alone will stop the spread of the virus anytime soon. And they led to new, and more urgent, demands that richer countries donate doses to poorer countries that could become breeding grounds for mutations if the virus spreads unchecked.

“Those sort of initiatives should be started immediately,” Shabir Madhi, a virologist at University of the Witwatersrand, Johannesburg who ran the AstraZeneca vaccine trial there, said on Monday. “What we’re facing right now, as everyone appreciates, is a global emergency.”

Like many developing countries, South Africa was relying on the relatively cheap and easy-to-store AstraZeneca shot — “the people’s vaccine,” as Ms. Taylor put it — to tamp down new outbreaks. When airport workers rolled vaccine crates out of the belly of an airplane last week, President Cyril Ramaphosa watched from the rain-soaked tarmac.

The clinical trial findings threw those vaccination plans into disarray. Scientists found that the AstraZeneca vaccine had 10 percent efficacy in protecting against mild or moderate illness caused by the variant, called B.1.351, though their level of statistical confidence was low enough that the vaccine could, in reality, have anywhere from zero to 55 percent efficacy.

Professor Madhi said on Monday that it was “unlikely” the vaccine had any more than 40 percent efficacy against B.1.351.

Outside experts said it was possible that the vaccine could make people less infectious, even if it does not stop them from getting sick. And while pausing the rollout in South Africa was sensible, some scientists said, people should still take any vaccine they are offered. AstraZeneca’s vaccine provides strong protection against the original virus and the variant first seen in Britain.

Because the trial participants in South Africa were relatively young and unlikely to become severely ill, it was impossible for the scientists to determine if the vaccine protected people from hospitalization or death. Immune responses detected in blood samples from vaccinated people suggest it could.

But if the vaccine does not stop mild or moderate cases, that means mass inoculations alone may not tamp down the spread of the virus, forcing health officials to resort to longer periods of harsh restrictions.

“The aim of vaccines, first and foremost, was to prevent hospitalization and death,” said Muge Cevik, an infectious disease expert at the University of St. Andrews in Scotland. “These results don’t change that. But if it’s truly not preventing transmission, then we need to adapt our strategy to focus on preventing hospitalizations and deaths through vaccinating the most vulnerable people, while minimizing community transmission.”

The B.1.351 variant has already spread beyond South Africa to neighboring countries, the United States and Britain. Scientists believe one of its mutations may make it harder for antibodies to grab onto the virus and keep it from entering cells.

Among scientists’ worries is that the variant first detected in Britain has acquired the same mutation, known as E484K, in some cases.

Simon Clarke, a professor in cellular microbiology at the University of Reading in southeast England, said that officials needed to conduct aggressive contact tracing of cases of the B.1.351 variant, on top of additional action to ensure that sick people quarantine.

“There’s been an attitude in some quarters that a vaccine is our automatic savior,” Professor Clarke said. “They’re really important, but they’re not a silver bullet. They’re not going to completely rid us of the virus. It will mutate. It will change.”

For South African health workers who were already angered by the country’s slow vaccine rollout, the new delay set off frantic efforts to determine when and how they could be vaccinated.

Some said they still wanted the AstraZeneca vaccine, reasoning that it was at least known to be safe, and available. Authorization of Johnson & Johnson’s vaccine could be as long as 12 weeks away, the lead investigator on the South African trial said on Monday.

And there were fears about the fate of the million doses of the AstraZeneca vaccine now sitting in storage. Those doses expire in April.

“The disappointment and frustration and anger is quite remarkable,” said Francois Venter, a professor of medicine at the University of the Witwatersrand. “Everyone spent a year being scared, and then had this dangled and suddenly withdrawn.”

Given the proven safety of the AstraZeneca vaccine and the hope that it might yet prevent hospitalizations and deaths from the new variant, Professor Venter said that health officials should consider offering it to anyone who wanted it.

South African officials, for their part, said they needed more data on the vaccine before they use it.

Dr. Salim Abdool Karim, co-chair of South Africa’s ministerial advisory committee on Covid-19, said at a news conference on Monday: “We don’t want to end up with a situation where we vaccinated a million people or 2 million people with a vaccine that may not be effective in preventing hospitalization and severe disease.”