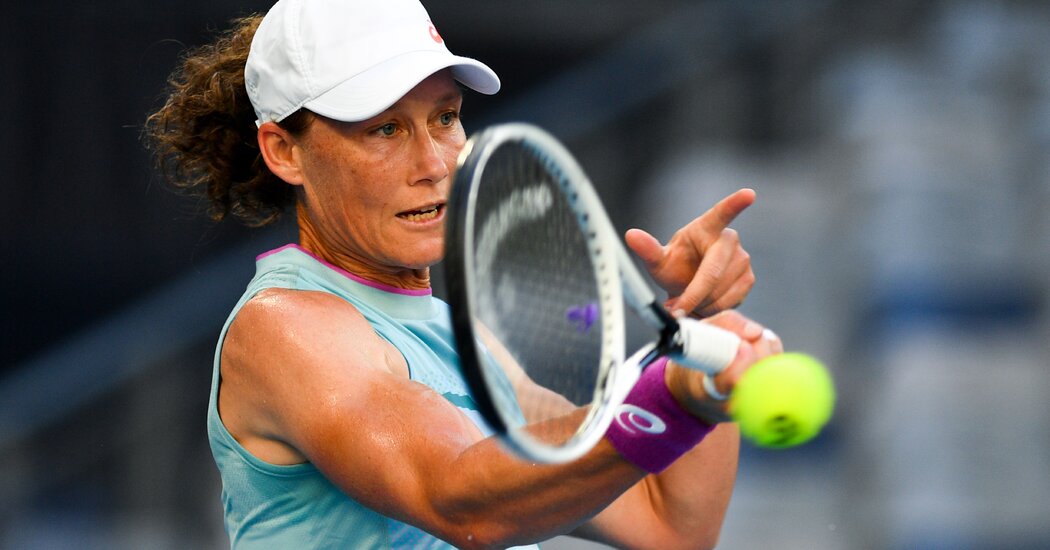 Jessica Pegula of the United States upset the 12th seed, Victoria Azarenka, in the opening round for her first match victory at a major tournament, and she will now face the Australian veteran Samantha Stosur. Although Stosur has focused on playing doubles over the past few years, she is still a force in singles, especially with a home-court advantage.

Her fellow Australian Alexei Popyrin certainly benefited from that advantage in his first-round upset of the 13th seed, David Goffin, and he will now meet Lloyd Harris. A win would put Popyrin, who is ranked 113th in the world, into the third round for a third straight year.

Here are more matches to keep an eye on.

Because of the number of matches cycling through courts, the times for individual matchups are best guesses and are certain to fluctuate based on when earlier play is completed. All times are Eastern.

As the world of professional sports slowly reopened amid the coronavirus pandemic, Ashleigh Barty, the world No. 1, decided not to travel to tournaments and stayed in Australia. That decision, which she attributed to concerns about bringing the virus back to her home country, kept her out of the U.S. Open and prevented her from trying to defend her French Open title.

Questions about the level of Barty’s preparations were quashed as she won the Yarra Valley Classic last week and then defeated her first-round opponent in the Open without dropping a game.

Daria Gavrilova, a former Russian national who now represents Australia, received a wild-card entry into the main draw of the Australian Open. Struggling with chronic foot injuries, she took a year away from tennis after the 2019 U.S. Open. She returned in time for the rescheduled French Open in October, defeating Dayana Yastremska in the first round. However, she has not been playing at her peak, and she will certainly struggle against the overpowering, aggressive brand of tennis that Barty has mastered.

Casper Ruud, the 24th seed, last year became the first Norwegian to win an ATP title and became the highest-ranking Norwegian in tour history, surpassing the mark set by his father, Christian Ruud, who reached No. 39 in 1995. Now Ruud is aiming to reach the third round for a third consecutive time at a major, solidifying his place in the top 25. In his way is a familiar opponent. Ruud defeated Tommy Paul in the second round of the French Open in October.

Paul, the world No. 53, had his best result at a Grand Slam last year, reaching the third round of the Australian Open by upsetting Grigor Dimitrov in a thrilling five-set match. Paul followed that up with an impressive win over Alexander Zverev in Mexico just a month later but was unable to carry that momentum into the second half of the season. Now he must be hoping that the quicker surface in Australia will favor him against Ruud, who tends to prefer playing out longer, more strategic points.

Coco Gauff seemed fully in control of her first-round match, easily beating Jil Teichmann. Just a week before, in a tuneup tournament, Gauff had needed three sets to defeat Teichmann. On Tuesday, Gauff increased her intensity, choosing to dictate as many points as possible rather than giving Teichmann the time to settle into craftier exchanges.

Elina Svitolina, the fifth seed, is a gifted defensive player who tends to soak up pressure, coaxing unforced errors out of offensively minded opponents. Svitolina’s consistency allows her to await the proper moment to unleash a counterattack, usually in relatively low-risk situations. For Gauff, this will present a particularly tough challenge. Although Gauff has shown from her breakthrough at Wimbledon in 2019 that she is mentally tough, being worn down by a defensive veteran can be unusually disheartening.

When he secured his 13th French Open title in October, Rafael Nadal tied Roger Federer for the most Grand Slam singles titles among men. Of Nadal’s 20 Grand Slam titles, only one was captured at the Australian Open, in 2009. Nadal, 34, has been the runner-up in Melbourne four times, losing in memorable matches to Federer, Novak Djokovic and Stan Wawrinka. Now, as he seeks to surpass Federer’s total, he will need to hold off some rising stars.

Nadal’s opponent tonight, the 23-year-old Michael Mmoh, has never been past the second round at a Grand Slam tournament. Now ranked 177th in the world, he had to play in the qualifying draws to make it into the Australian Open, and he struggled through a grinding five-set match against a fellow qualifier, Viktor Troicki, in the first round. Mmoh’s quick, aggressive style can put an opponent on his back foot, but that will be tough to do against Nadal, whose defensive skills, while often overlooked, are just as exceptional as his offensive prowess.

Here are a few more matches to keep an eye on: