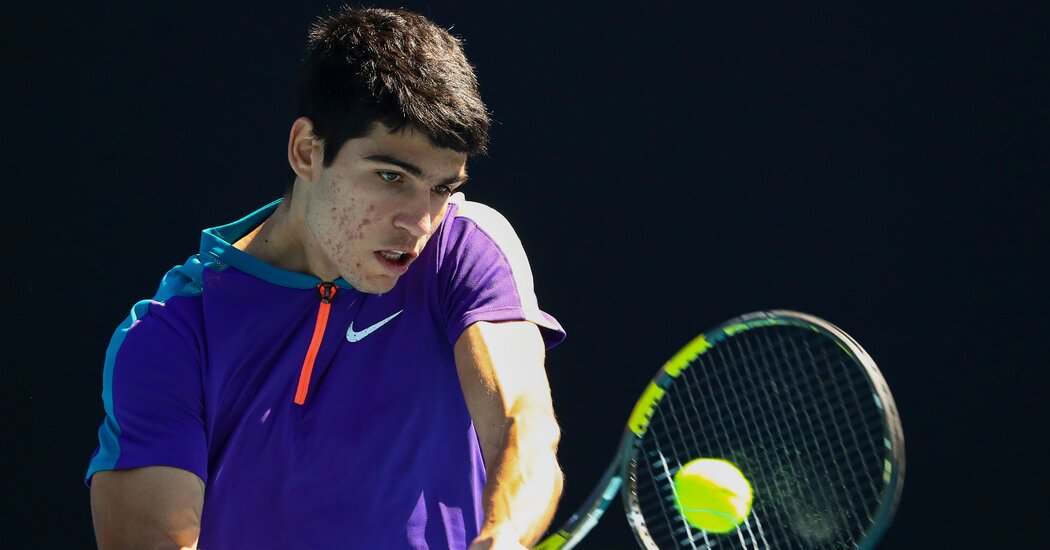 Alcaraz beat David Goffin of Belgium, ranked No. 13, last week during a warm-up event in Australia, which kick-started the “next Rafa” buzz at Melbourne Park. Then he drew the ideal first-round opponent — Van de Zandschulp, a 25-year-old who has never sniffed the top 100 and looked the part as Alcaraz ran him around the court and pressured him into 73 errors.

Ferrero, the former world No. 1 who has been working with Alcaraz the past three years, said Alcaraz’s time practicing last week with Nadal and Andrey Rublev of Russia, the No. 7 seed, was a key to his success in the first round.

“He got to see what great players do,” Ferrero said.

That did not start out so well. Late last week, Alcaraz walked onto the court at John Cain Arena for a hitting session with Nadal, who immediately began pelting him with forehands and backhands, because Nadal practices as if he is playing a Grand Slam final, even when he has a sore back.

“He hits the ball very hard,” Alcaraz said of Nadal. “He tries to hit harder on every ball.”

Alcaraz struggled at first to keep the rallies going more than a few shots. Nadal did not relent. Alcaraz took a while to adapt to the pace.

There is no shame in that, since 17-year-olds are not supposed to be able to compete at this level of men’s tennis in 2021. The game is supposed to be too physically demanding for a teenager who is balancing professional tennis with his final year of online high school. But Alcaraz is already 6-foot-1 (the same height as Nadal), with broad shoulders and thick quadriceps muscles.

But Tuesday’s win was his first best-three-of-five-sets match. He still has the complexion of a high school senior, and he prefers Instagram to TikTok. He worships the soccer team Real Madrid (Nadal does, too), though he gave up organized soccer when he was 10 to focus exclusively on tennis. He lives mostly at Ferrero’s tennis academy in Villena, near Spain’s southeastern coast, roughly an hour by car from Alcaraz’s home in El Palmar, where he returns every other weekend.

Spain’s top men’s players, who dominated the top 50 not long ago and are still a force, have for years been a very close-knit group. They show up at one another’s matches and gather on the road to share meals and watch soccer.