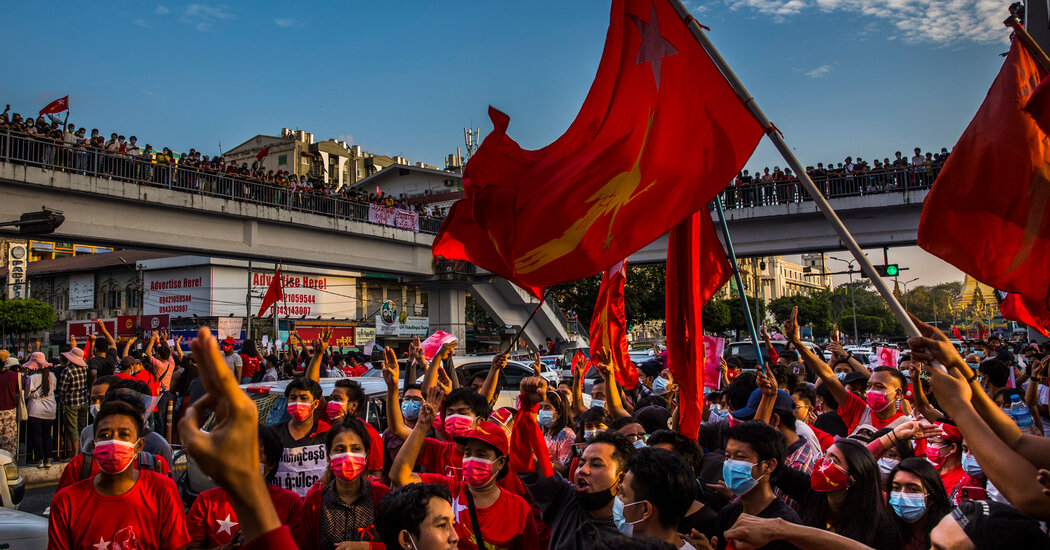 The mood on the streets was both festive and tense.

In a matter of days, protests against the military coup in Myanmar had swelled to hundreds of thousands of people, from a few dozen. Students, laborers, doctors and professionals had gathered in droves to proudly defend democratic ideals in their country, even as the police fired into crowds, sometimes using live ammunition and sometimes rubber bullets, and deployed water cannons and tear gas.

On Monday night, the military issued its first warning. “Democratic practice allows people to have freedom of expression,” said Senior Gen. Min Aung Hlaing, who seized power last week. “Democracy can be destroyed if there is no discipline.”

By Tuesday, the protests showed no signs of fizzling, despite the announcement of a new national curfew and a ban on gatherings of five people or more. There were reports that a woman had been shot and critically wounded. Four police officers were wounded in a clash with protesters in Mandalay, state television reported. Some protesters were injured and some were detained.

The protesters have called for Daw Aung San Suu Kyi, the civilian leader who was put under house arrest last week, to be freed, and for the generals to step aside.

As the demonstrations have grown, the crowds have taken on an almost celebratory atmosphere. Families have defiantly banged on pots and pans in the evening, a traditional way to drive out the devil, creating a huge din in opposition to the coup. The ritual is now carried out nightly at 8 p.m. across the country.

Many have held up the three-finger salute, a symbol from the “Hunger Games” series that was adopted by anti-government protesters in Thailand last year. The salute has become so ubiquitous in Myanmar that it can be seen on pedestrian bridges near Sule Pagoda, on balconies and even projected on the sides of buildings.

One of the first demonstrations against the coup was organized on Wednesday by doctors at a Yangon hospital who staged a protest wearing their blue scrubs, surgical masks and red ribbons, the color signifying support for Ms. Aung San Suu Kyi and her political party, the National League for Democracy.

Since the military takeover, the city has been awash in the bright crimson hue.

Vendors at street markets display red balloons. Red flags wave over avenues teeming with protesters dressed in red shirts and hats, and even red face masks to help prevent the spread of the coronavirus.

When there were no red balloons left to hang on Friday, the vendors resorted to pink ones. One creative artist projected images of a dove of peace and the three-fingered salute on an aging building near downtown Yangon. The background was red.

Protesters have even offered red roses to the police.

“You are the people’s police,” they said as they handed out the flowers. Surprised by the gesture of kindness, more than one officer wiped away tears. One woman cried as she begged the police, “Please be kind to us.”

While the protests have remained largely peaceful, some say there is ample reason to fear the military will unleash a wave of violence in the coming days. The military has cracked down on previous protests with hundreds, if not thousands, of people killed.

Police officers with riot shields and face masks have stood menacingly behind barricades in central Yangon. Over the weekend, as crowds grew larger and thousands of people gathered at Sule Pagoda, some protesters held standoffs with the blue-helmeted police as they tried to march down streets that had been closed off.

At night, some bold young men could be heard singing anti-military songs while holding their cellphones aloft like candles.

Despite frequent internet outages and social media bans, the protesters continue to gather in the streets, day after day, holding portraits of Ms. Aung San Suu Kyi and waving the crimson flag — emblazoned with a white star and golden fighting peacock — of her ousted National League for Democracy party.

But after a power-sharing agreement between the military and the civilian government was tossed aside by the generals last week, it seemed unlikely that the military would bend to protesters’ demands or tolerate the demonstrations for much longer.

In his statement, Gen. Min Aung Hlaing warned that the military would be forced to take action against those who continued to violate the law. Disrupting stability would not be tolerated, he said. “Freedom should not disturb others.”