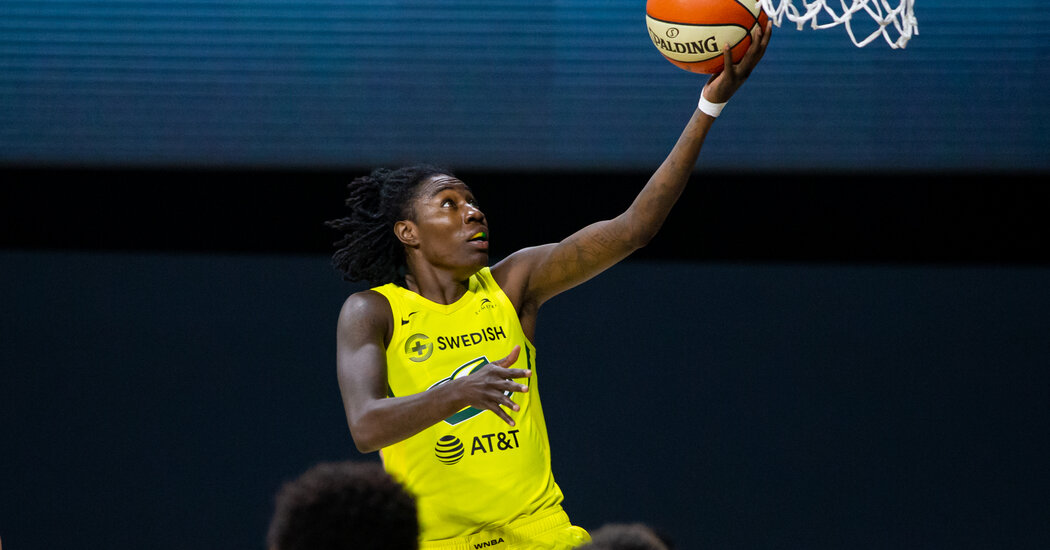 The Liberty traded away the top pick in this year’s draft and Kia Nurse, their top scorer last season, as part of a flurry of deals across the W.N.B.A. on Wednesday that also brought the All-Star Natasha Howard to New York.

The Liberty acquired Howard as part of a three-team deal with the Seattle Storm and the Phoenix Mercury. Howard, a three-time W.N.B.A. champion, provides a solid interior player for the Liberty to pair with last season’s No. 1 overall draft pick, Sabrina Ionescu. As a designated core player for Seattle, Howard had to approve the trade.

The No. 1 pick didn’t stay in Seattle long, as the Storm traded it to Dallas for Katie Lou Samuelson and the Wings’ second-round pick in 2022. The Wings become the first team in W.N.B.A. history to hold the first and second overall picks in the same draft. In addition, Dallas also holds the fifth, seventh and 13th selections in 2021.

“The opportunity to acquire the top pick in a draft does not present itself very often,” said Greg Bibb, the Wings’ president and chief executive. “By securing this pick, we will ensure our ability to draft the player at the top of our draft list while having additional draft assets at our disposal to further improve our team.”

It’s only the third time in the league’s history that the top pick in the draft has been traded. On draft night in 2007, Phoenix traded the No. 1 pick to the Minnesota Lynx. Three years later, the Lynx sent the top pick to Connecticut in a deal for Lindsay Whalen, who is from Minnesota.

There is a lot of uncertainty about who will be available to be picked in this year’s draft. The N.C.A.A. granted every player an extra year of eligibility, meaning top seniors like Dana Evans of Louisville and Michaela Onyenwere of U.C.L.A. could return to college next year.

Also on Wednesday, in a separate trade with Seattle, the Liberty got guard Sami Whitcomb for the rights to Stephanie Talbot.

“We have the privilege of welcoming multiple-time W.N.B.A. champions Natasha Howard and Sami Whitcomb to Brooklyn,” Liberty General Manager Jonathan Kolb said. “The magnitude of Natasha choosing to be in New York cannot be overstated. She is an All-W.N.B.A. talent who has worked for and earned everything that she has achieved, who has contributed to championship runs on multiple teams, and who will fit seamlessly into Walt Hopkins’ system.”

Howard won the league’s Defensive Player of the Year Award in 2019. The 29-year-old forward won one title in Minnesota, in 2017, and two titles in Seattle, in 2018 and last season.

“I am very excited to be a part of the New York Liberty organization,” Howard said. “I’m also excited to meet my new teammates and the fans. I’m so pumped about the 2021 season.”

Howard averaged 9.5 points and 7.1 rebounds last season while shooting 53 percent from the field.

Whitcomb was a key member of the Storm’s franchise the last few years. The 32-year-old is a solid 3-pointer shooter.

Nurse, the Liberty’s 10th overall selection in the 2018 draft, averaged 11.6 points, 2.6 rebounds and 2 assists per game over 89 contests (59 starts) during her three-year tenure. She led the team in scoring last season with 12.2 points per game.

The Liberty drafted Walker ninth overall last season, and she averaged 3.3 points and 1.5 rebounds while playing in 18 games.

“I would like to thank Kia Nurse and Megan Walker for their contributions to our organization,” Kolb added. “The unfortunate part of transactions such as these is that you have to say goodbye to people who have contributed to the team in so many ways. ”

Finally, the Lynx traded forward Mikiah Herbert Harrigan to the Storm for the 2022 first-round pick they had acquired from Phoenix through the Liberty.