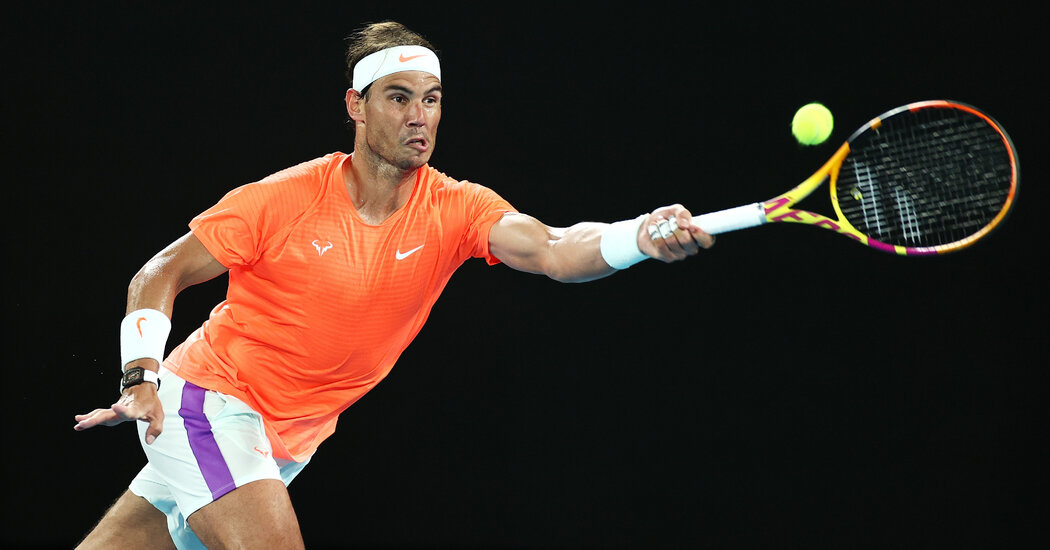 Rafael Nadal cruised past Michael Mmoh, a 23-year-old American, in his second-round match, dropping only seven games across three sets. Although there was plenty of flash on the court, an aggrieved fan had the most memorable moment, heckling Nadal and making an obscene gesture at him before being removed by security. During a post-match news conference, Nadal laughed away the stunt and was visibly puzzled, but not angered, by the fan’s outburst.

Tonight’s matches won’t have any hecklers as fans won’t be allowed at the tournament for the next several days because of a coronavirus lockdown in the Australian state of Victoria, but they are sure to provide plenty of entertainment as the third round of the Australian Open concludes.

Here are some matches to keep an eye on.

Because of the number of matches cycling through courts, the times for individual matchups are at best estimates and certain to fluctuate based on when earlier play is completed. All times are Eastern.

Karolina Pliskova, the sixth seed from the Czech Republic, is one of the best players on the women’s tour without a Grand Slam title. Her only appearance in a final was at the 2016 U.S. Open, and although she has reached two semifinals since, she has not been able to push past more nimble opposition.

Pliskova and Karolina Muchova, her countrywoman, have played each other only in Grand Slams, with Pliskova winning in the first round of the 2019 Australian Open and Muchova prevailing in a three-set match in the round of 16 at Wimbledon later that year.

Muchova can adapt her game and tends to push her opponents around the court with a variety of shots that rely more on finesse than power. Pliskova will need to grab control of points early with her powerful baseline shots if she’s going to avert an upset.

Feliciano Lopez upset the 31st seed, Lorenzo Sonego, in a tight five-set match in the second round. Lopez, a 39-year-old Spaniard, is playing in his 75th consecutive Grand Slam tournament, continuing a streak that started at the 2002 French Open. Having exited in the first round in the last four Australian Opens, Lopez is enjoying being deeper into the tournament.

Andrey Rublev, the seventh seed, has been bulldozing his opposition over the last couple of weeks. Rublev, 23, dropped only one set in singles as he helped Russia win the ATP Cup, and he has won his first two rounds at the Australian Open in straight sets. His explosive forehand shots are thriving on the fast courts of Melbourne Park, helping him move opponents around the court even when he is under pressure. While Lopez certainly has more experience than Rublev, it will be hard for him to keep up with the pure ferocity of Rublev’s game.

In her return to a Grand Slam after skipping the United States and French Opens in 2020, Belinda Bencic has not been particularly satisfied with her play going into the third round. Bencic, the 11th seed from Switzerland, needed three sets to beat each of her unseeded opponents in the first two rounds. She is an incredibly intelligent player, but sometimes struggles to keep pace with some of her peers, who can overpower her. Bencic, 23, will need to improve if she’s to reach the round of 16.

Elise Mertens, the 18th seed from Belgium, is on a good run: She won the Gippsland Trophy last week while beating the fifth-ranked Elina Svitolina in the process. Mertens, 25, has a particularly consistent game, which is reflected in her Grand Slam results. She was a semifinalist at the 2018 Australian Open, and has not lost before the third round in a Grand Slam since. Considering Bencic’s middling play going into the match, Mertens should be a clear favorite.

Karen Khachanov, the 19th seed, and Matteo Berrettini, the ninth seed, have styles so similar that one might think they were coached together from a young age. Both are 24 years old, and they are built in the same vein, models of strength sticking out among a generation of players who aimed to be lithe and flexible.

Berrettini had a breakout year in 2019, when he reached the U.S. Open semifinal, but he struggled last year, not making the final of any ATP event. Now, he’s looking to return to his first Grand Slam quarterfinal since that U.S. Open run. Khachanov hasn’t made a quarterfinal at a major since the 2019 French Open.

When these two bruisers meet, especially on a faster court, expect plenty of points to end with either a stunning winner, or an unforced error when a player chooses the wrong moment to strike.

Here are a few more matches to keep an eye on.