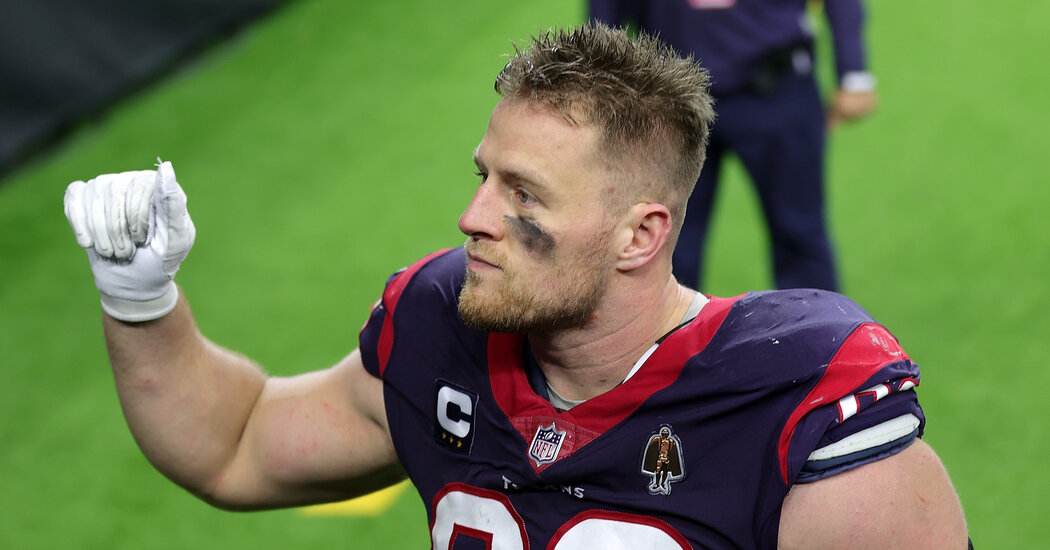 The Houston Texans released the three-time defensive player of the year J.J. Watt on Friday after he asked to leave the team.

“I have sat down with the McNair family and I have asked them for my release, and we have mutually agreed to part ways at this time,” he said in a video posted to Twitter. “I’m excited and looking forward to a new opportunity.”

Watt will become a free agent, and even at 31 should still be in demand by teams seeking a pass rusher.

After making the playoffs in four of five seasons, the Texans collapsed to 4-12 in 2020. Watt has expressed a desire to play for a contending team in the twilight of his career.

“I don’t think it’s any secret that I don’t have 10 years left in this league,” Watt told ESPN in November. “I’m not looking to rebuild. I’m looking to go after a championship, and that’s what I want to do.”

Like most bad teams, the Texans must decide whether to try to fix things quickly or go for a complete rebuild. The team has said it would not trade its star quarterback Deshaun Watson, but reports continue to swirl that they are shopping him. Watt would have been paid $17.5 million had the Texans retained him this coming season.

Watt was drafted No. 11 overall in 2011 out of Wisconsin. At 6-foot-5 and nearly 300 pounds, he has been a fearsome presence on the defensive line and an elite pass rusher, including four seasons with 15 or more sacks. He was one of only three defensive players selected to the N.F.L.’s all-decade team for the 2010s, along with Von Miller of the Broncos and Aaron Donald of the Rams.

He has five Pro Bowl selections, but has had injury problems in recent years. He did play 16 games this past season, but had only five sacks with the struggling Texans. He has 101 sacks in 10 seasons, nearly double the next highest total in Texans history.

Although the Texans had some good years in his 10-season run with them, the championship he desires eluded him and his team never advanced past the divisional round of the playoffs.

It has been a rough couple of months for Houston sports teams. In January, the Rockets traded the former most valuable player James Harden to the Nets, and the Astros lost the former World Series Most Valuable Player George Springer to the Blue Jays in free agency.

Besides his three defensive player of the year awards, the last in 2015, Watt won the Walter Payton man of the year award in 2017 for his efforts to raise millions for relief after Hurricane Harvey.

“Simply put, there has been no person in the past decade who has made a greater impact on the Texans organization than J.J. Watt,” team owner Janice McNair said in a statement.

Watt expressed his sentiments toward Houston fans on Friday. “The way you guys have treated me — except draft night, you guys booed me on draft night — but every day after that you treated me like family.”