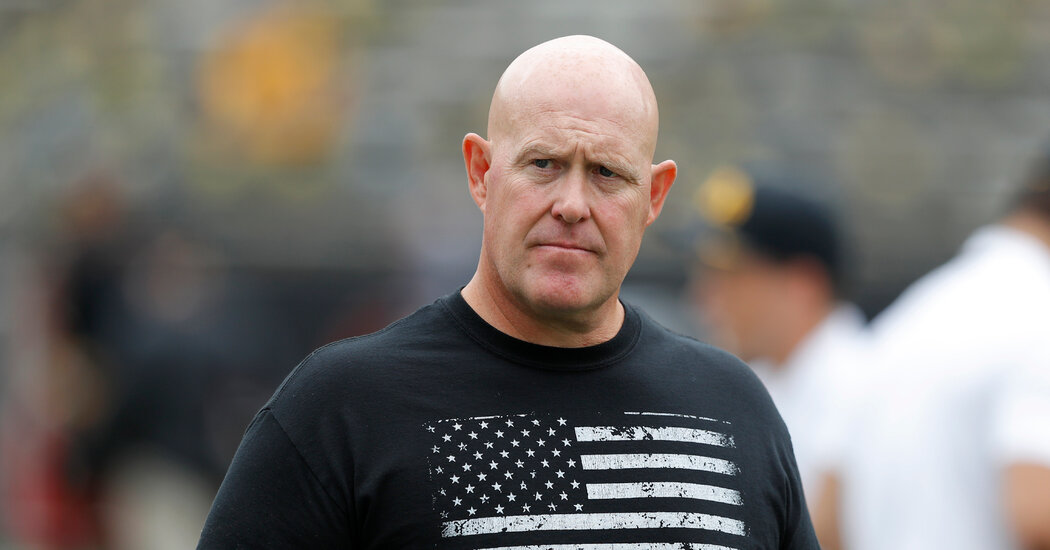 An organization that promotes diversity in the N.F.L. on Friday criticized the Jacksonville Jaguars’ recent hiring of Chris Doyle, who left the University of Iowa’s football staff last year after a number of current and former Hawkeyes players said he had fostered a culture of bullying and racism.

A statement from the Fritz Pollard Alliance, which is named for the first Black head coach in the N.F.L., said the Jaguars’ decision to make Doyle their director of sports performance was “simply unacceptable.”

“Doyle’s departure from the University of Iowa reflected a tenure riddled with poor judgment and mistreatment of Black players,” Rod Graves, the executive director of the Fritz Pollard Alliance, said in the statement. “His conduct should be as disqualifying for the N.F.L. as it was for University of Iowa.”

Doyle, who was Iowa’s strength and conditioning coach, reached a separation agreement with the university in June, ending two decades of work there.

The Jaguars announced on Thursday that Doyle had joined the staff of Urban Meyer, who was named Jacksonville’s head coach last month. Meyer, who won two college national championships as the head coach at Florida and one at Ohio State, has not coached since 2018 and has never worked in the N.F.L. before.

The hiring of Doyle, who is white, comes at a time of intense scrutiny of the N.F.L.’s hiring practices and questions about whether minority candidates for coaching jobs have equal opportunities to be hired.

“I’ve known Chris for close to 20 years,” Meyer said on Thursday when questioned about hiring someone who had been accused of mistreating Black athletes. Doyle was the strength coach at the University of Utah in the late 1990s, a few years before Meyer was hired as the head coach there.

“Urban Meyer’s statement, ‘I’ve known Chris for close to 20 years,’ reflects the good ol’ boy network that is precisely the reason there is such a disparity in employment opportunities for Black coaches,” Graves said in the statement.

Neither the N.F.L. nor the Jaguars responded to a request for comment on the Fritz Pollard Alliance’s statement.

During a news conference last week, N.F.L. Commissioner Roger Goodell said that he was not satisfied with the rate at which coaches of color have been hired in the N.F.L., which has 32 teams.

Of the seven head coaches hired since the end of the regular season, just two were nonwhite. Last year one of five head coaching jobs went to a minority candidate, and the year before just one in eight.

Over the last three years 80 percent of head coaching jobs have gone to white candidates, though players of color made up 69.4 percent of the N.F.L. this season, according to the Institute for Diversity and Ethics in Sport.

After the Jaguars hired Meyer and General Manager Trent Baalke, who are both white, last month, Graves praised the organization for interviewing several minority candidates and for seeking input from the Fritz Pollard Alliance.

“I cannot argue that the process didn’t meet the standard of fair, open and competitive,” Graves told The Florida Times-Union.

The hiring of Doyle, however, raised issues beyond the N.F.L.’s commitment to diverse hiring.

Before Doyle left Iowa, Emmanuel Rugamba, a former Hawkeyes defensive back, gave multiple examples of the coach demeaning players with negative racial stereotypes. Rugamba said in a tweet that one day after a Black player walked away from Doyle, the coach said, “Why you walking wit all that swagger I’ll put you back on the streets.”

James Daniels, a Chicago Bears offensive lineman and a former Hawkeye, tweeted over the summer: “There are too many racial disparities in the Iowa football program. Black players have been treated unfairly for far too long.”

Doyle also presided over an off-season workout in 2011 that resulted in the hospitalization of 13 players.