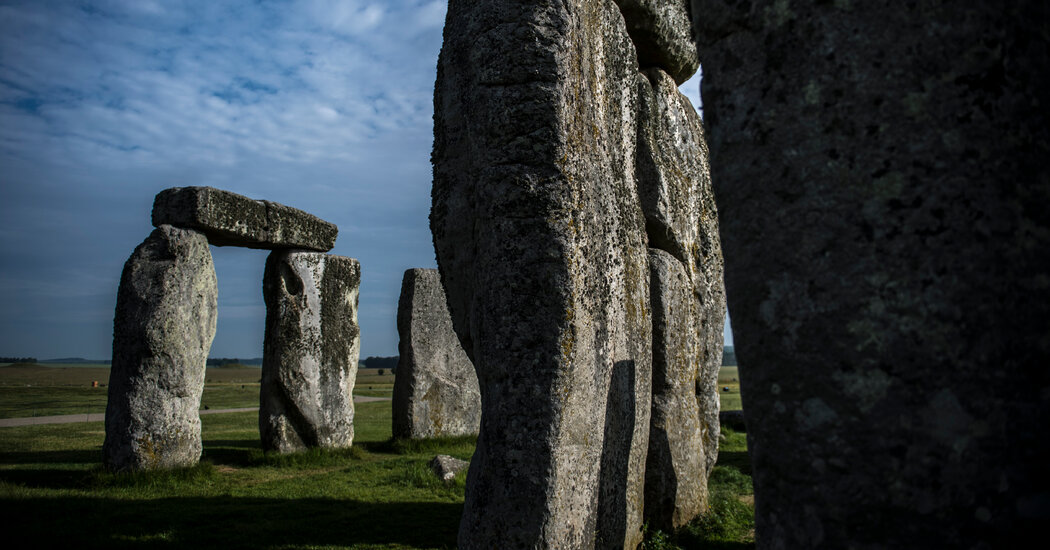 Fans of the 1984 heavy metal mockumentary “This Is Spinal Tap” will remember the scene in which the band commissions a stage set that’s a replica of Stonehenge, the Neolithic ruin in Wiltshire, England. Alas, a careless set of measurements results in the musicians playing alongside a model that stands an underwhelming 18 inches high rather than 18 feet tall, a failure showcased on tour and, wincingly, accentuated by the dancing dwarves enlisted to make the prop appear larger.

Thirty-seven years later it turns out that the film’s boulder gag contains a pebble of historical truth. On Friday a team of archaeologists reported in the journal Antiquity that they had unearthed a stone circle in Pembrokeshire, Wales, part of which they believe was dismantled, hauled 175 miles to Salisbury Plain and reassembled as Stonehenge.

Mike Parker Pearson, a professor at University College London who led the study, said the stones could have been transported as part of a larger movement of people to the area. “Stonehenge is a secondhand monument,” he said sardonically. The study will be featured in a BBC documentary, “Stonehenge: The Lost Circle Revealed,” to be broadcast in Britain on Friday evening.

Stonehenge was built in phases from around 3,000 to 1,500 B.C., starting with a circular ditch and bank together with 56 Aubrey holes, a ring of chalk pits that surrounded a stone circle. An excavation in 2008 of one pit, led by Dr. Parker Pearson, revealed that it had held an upright of bluestone, so named because of its bluish-gray hue. The outlying ring of these igneous standing stones, each about nine feet tall, was erected centuries before larger sandstone slabs, known as sarsens, are believed to have originated from West Woods, 15 miles away on the southern edge of the Marlborough Downs.

The geologist Herbert Thomas established in 1923 that the dolerite used to build Stonehenge came from an outcrop in the Preseli Hills of western Wales. In 2011, Dr. Parker Pearson’s team discovered two megalithic quarries in that region and began to search nearby for ritual structures that might have supplied the bluestones and blueprint. Although several circular monuments were surveyed and excavated, none was found to be Neolithic. In an interview, Dr. Parker Pearson said his investigators had a “terrible time” trying to find evidence of a proto-Stonehenge.

The researchers were about to give up when they returned to a site named Waun Mawn, where a handful of toppled bluestones were seemingly placed in an arc. “The arrangement was first recorded a century ago,” Dr. Parker Pearson said. “The theory by early archaeologists that it might be a circle was largely dismissed or simply ignored.”

In 2011, his own magnetometer and earth-resistance surveys had failed to locate any geophysical anomalies that might yield evidence of a circle or monument. “We concluded that since the instruments didn’t show us anything, there couldn’t be anything there,” Dr. Parker Pearson recalled. “A serious mistake.”

During the summer of 2017, the archaeologists dug trenches at both ends of the arc of serving stones and discovered two holes that each had once held stones. When further surveys using earth resistance, ground-penetrating radar and electromagnetic induction came to naught, the team made what was literally a last-ditch effort beyond the arc and uncovered four distinctive socket-shaped pits from which standing monoliths had been removed.

Extrapolating from the positions of the empty sockets and the fallen bluestones, the researchers sketched out a circle some 360 feet across — the same diameter as the earthen ditch that originally enclosed Stonehenge. Dr. Parker Pearson, alight with boyish glee, noted that Waun Mawn and Stonehenge are the only two Neolithic monuments in Britain that conform to those specifications. To his further delight, the entrance to both circles were aligned toward the midsummer solstice sunrise.

The team was able to determine when the sediment inside the socket holes was last exposed to light. The study suggested that Waun Mawn is the oldest-known stone circle in Britain, dating from about 3,400 B.C., and that the circle was dismantled shortly before the construction of Stonehenge in 3,000 B.C.

Dr. Parker Pearson theorized that the six ghost holes and four surviving standing stones were part of a wider circle of 30 to 50 pillars, albeit spread out more haphazardly than the initial bluestone grouping at Stonehenge. Those four stones are about the same size and dimensions as the 43 bluestones that remain at Stonehenge, and are the exact same rock type as three of them. One of the Stonehenge bluestones has an unusual cross-section whose pentagonal shape matches one of the gaps at Waun Mawn.

“It could have been in that hole,” Dr. Parker Pearson said. “The proof is not categorical, but it is really quite suggestive.”

Asked why the Waun Mawn stones were moved to Salisbury, he deferred to his colleague, an archaeologist from Madagascar named Ramilisonina, who developed a new interpretation of the ritual landscape around Stonehenge: The megaliths were used to represent the ancestors and more or less keep their memories alive for eternity.

“The dismantling of Waun Mawn and the rise of Stonehenge could have been part of a larger migration to an axis mundi where the earth and the heavens are in harmony,” Dr. Parker Pearson said. These ancient people, he speculated, “may have taken their monuments with them as a sign of their ancestral identity, which they required to root themselves in a New Jerusalem.”

How were the megaliths transported from South Wales to Salisbury? Dr. Parker Pearson doubts the once popular theory that they came by sea. “Our work has really put a bit of a spoke in that,” he said. “The dominant sources of the bluestones are the quarries on the northern slopes of the mountains, and it seems unlikely that they would have been brought up the steep northern edge before being carried down the southern slopes to the valley.”

He favors a land route, over which the massive stones, each weighing up to four tons, could be hauled on rows of poles and wooden sledges by as many as 400 people. “This would have been like going to the moon,” he said, “but the Neolithic equivalent.”