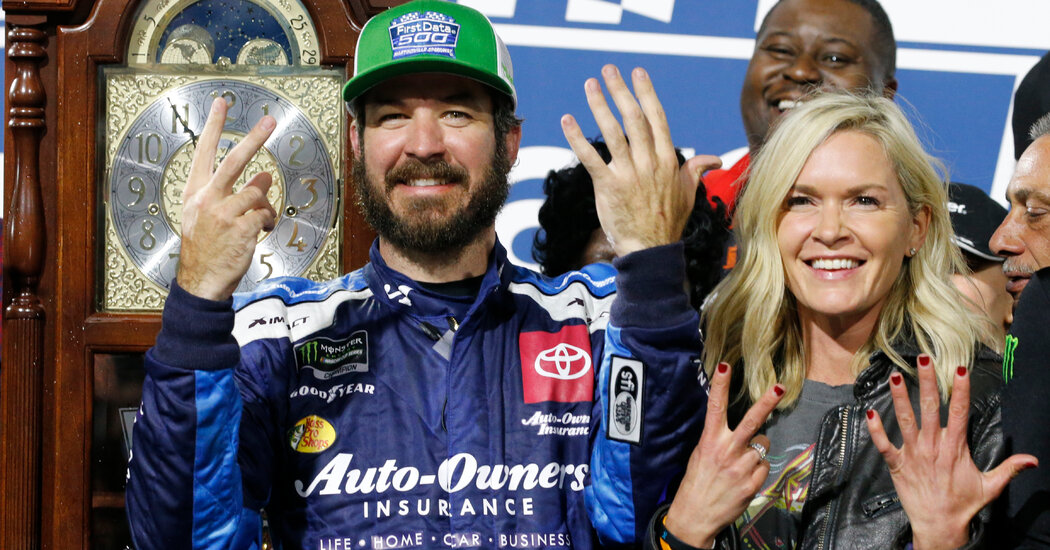 Fifteen years ago, the NASCAR driver Martin Truex Jr. came onto the racing scene with high expectations, debuting full time as a heralded young driver with Dale Earnhardt Inc. and being talked up as one of the next great drivers.

Yet whether it was the broken shifters, blown engines or devastating pit road penalties that ended his race day or his very teams folding beneath him, threatening his entire career, Truex, 40, managed to reach Victory Lane only twice in his first decade in NASCAR’s top series.

Over the last five seasons, however, Truex has driven himself from career letdown to a probable Hall of Famer and one of the most successful American racecar drivers ever, ranking 30th in career wins.

Since 2015, no driver has led more laps than Truex and only Kevin Harvick has taken home more checkers.

He has quietly and patiently, as has always been his nature, become one of the most dominant drivers in the sport.

He has won on short tracks, on mile-and-a-half tracks, and on road courses, but he has not won on the sport’s high-banked superspeedways like Talladega or Daytona, where he is racing on Sunday in the season-opening Daytona 500.

It will be his 17th attempt.

He placed second at the 2016 Daytona 500, losing to Denny Hamlin by .01 second, the smallest margin of victory (or defeat, from Truex’s perspective) in the race’s long history.

“Everywhere we go, he has a chance to win,” said Joe Gibbs, the Hall of Fame football coach and Truex’s current team owner. “And there are not a lot of guys like that.”

All the while, Truex has coped with a deeply personal challenge: Sherry Pollex, his longtime girlfriend, has battled ovarian cancer first diagnosed in 2014. After aggressive treatment, she improved but late last year Pollex announced the disease had come back.

For Truex, standing by his partner’s side while she endured yet another surgery and more rounds of chemotherapy is as much a part of life as strapping on his helmet and climbing into the cockpit of his racecar.

Cancer, he said, “is what we live all the time.”

“But you learn to understand what matters most and not worry about the stuff that doesn’t matter,’’ he added.

His boss put it more succinctly.

“He’s gone through so much,” Gibbs said.

Truex tries not to think in the long term.

With a mentality that has been honed as both a world-class racecar driver and a partner to someone in the fight of her life, Truex tends to focus on the world right through his windshield: his next race, Pollex’s next treatment, and maybe, if he’s fast enough, hoisting a second Cup Series championship come November.

He’s not thinking about retirement, nor is he worried about his place in his sport’s history.

“I’ve never really thought much about a legacy or what my career means,” Truex said. “The main thing right now is that I still love racing, I love to compete, and I love to win.”

Now, as he nears the twilight of a career full of highs and lows, Truex is focused on the task at hand; to win the Daytona 500, to rack up more victories, and to once again find himself in Victory Lane at season’s end, dedicating another championship to his girlfriend as the metallic green ticker tape fills the air.

It would be the culmination of a career born in a small town near the Jersey Shore, far from the epicenter of stock car racing in the South.

He was introduced to racing by his father, a racer who had made a name for himself regionally on what was then called the Busch North Series.

“Racing was a hobby,” Truex Jr. said of his father’s racing career. “He always had to pay for everything himself.”

Just like his father, Truex Jr. worked on his family’s boat as a teenager to earn money to buy car parts for his races at nearby Wall Stadium, a one-third-mile paved oval track where he learned to drive a racecar.

Truex’s first win came soon after, in 2007, at Dover International Speedway in Delaware.

Then, season after season, Truex failed to find a formula that worked.

He left the Earnhardt team at the end of the 2009 season to drive the No. 56 car for Michael Waltrip Racing. But after Truex won only once in 2013, and the team folded.

Without a car to drive, Truex thought his career, and thus his lifelong dream, might be over.

But a ride popped up in Barney Visser’s Colorado-based Furniture Row Racing team and after brief negotiations, Truex signed on to drive the No. 78 car.

Little was expected of the team, a one-car anomaly and the only race team not based in or around Charlotte, N.C.

After a disastrous 2014 campaign, while much of Truex’s focus was trained on his girlfriend’s health, the pieces began to fall into place.

In 2017, a year-and-a-half removed from his historically close Daytona 500 loss to Hamlin, after a season that found him in Victory Lane eight times, Truex hoisted the silver NASCAR Cup trophy on a warm night at Homestead-Miami Speedway, the season’s champion-crowning finale.

It was a race he needed to win outright to become the season’s champion.

As Truex took his victory lap, the in-car camera showed him wiping tears from his eyes, his voice wobbling with emotion as he thanked his pit crew over the radio.

Moments later, as the ticker tape littered Victory Lane and with the tears still welling, he publicly recognized Pollex, likening the three-hour fight he had just endured in his car to the fight that they had endeavored together.

It was the highest point in a career marked by so many lows, so many close calls, and so many almosts.

After coming one position short of winning back-to-back championships in 2018, Furniture Row Racing announced it would cease operations.

Truex soon signed with Joe Gibbs Racing and has since been driving the No. 19 car, in which he has won eight races over the last two years.

Gibbs credits Truex’s mild manner for much of his success behind the wheel.

“What impresses you is how even Martin’s personality is away from the racetrack,” Gibbs said. “That carries over into the racecar and really helps him because he can think his way through problems really easy.