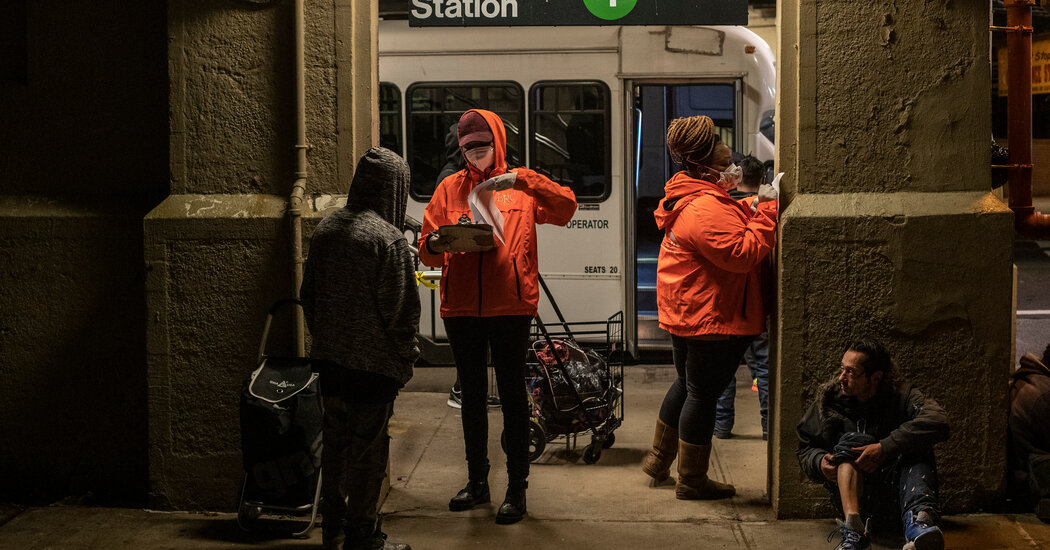 Advocates for homeless people in New York City sued the Metropolitan Transportation Authority on Friday over a series of Covid-19 rules that the suit says unfairly target people who shelter in the city’s subways.

The rules prohibit people from staying in a subway station for more than an hour or after a train is taken out of service, and ban carts more than 30 inches long or wide. They were enacted on an emergency basis last April and made permanent in September.

Last spring, the pandemic and shutdowns emptied the subways of regular commuters, and dozens of transit workers died of the coronavirus. Images of trains half-filled with sleeping homeless people accompanied by the sprawl of their belongings became a symbol of a city in crisis and helped prompt Gov. Andrew M. Cuomo to shut down the system every night for cleaning.

The rules’ stated purposes were to “safeguard public health and safety,” help first responders get to work and “maintain social distancing.” But the rules exempt so many activities from the one-hour limit — including public speaking, campaigning, leafleting, artistic performances and collecting money for religious or political causes — as to make it “clearly apparent” that their real purpose is to exclude homeless people from the subways, the suit says.

The lawsuit was filed by the Urban Justice Center’s Safety Net Project on behalf of Picture the Homeless and a homeless man named Barry Simon.

Mr. Simon had been ordered out by the police “dozens of times” while resting in a station and threatened with arrest on several occasions, according to the lawsuit. Mr. Simon, 54, was ejected from stations at least 10 times because the cart he wheels his possessions in was too big, the suit says.

Because those experiencing homelessness in New York City are disproportionately Black and Latino and people living with disabilities, the rules violate state human and civil rights law, the suit says. It also says that the rules were enacted without proper review.

Abbey Collins, a spokeswoman for the M.T.A., said in a statement: “We are reviewing the lawsuit that we first learned of in the press. We will vigorously defend the regulations in court that were put in place to protect the health and safety of customers and employees in the midst of a global pandemic — period.”

Homeless people’s use of the subways as de facto shelters, long a fact of life in New York, has become a hot-button issue. Many homeless people now avoid the city’s barracks-style group shelters for fear of contracting the coronavirus. While the city is adding hundreds of private rooms in hotels to the shelter system, the contested rules and the nightly shutdown have left some people to choose between sleeping outdoors in winter and taking their chances in the group shelters.