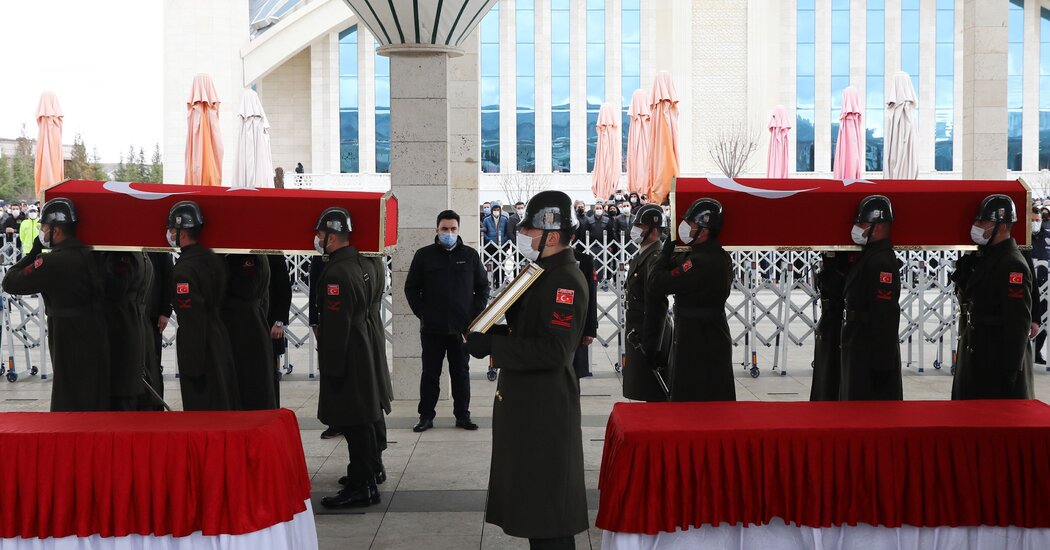 ISTANBUL — Turks reacted with shock and anger Monday to the news that Kurdish guerrillas had executed 13 Turkish soldiers and police officers held captive in a cave in the mountains of northern Iraq.

The men were being held hostage by members of the Kurdistan Workers’ Party, or P.K.K., a Maoist guerrilla movement that has been fighting the Turkish state for more than three decades. Turkish soldiers discovered their bodies in a cave during a military operation in Iraq’s Gara region, the government said Sunday. All of the hostages had been executed, all but one with gunshots to the head, it said.

The death toll, and the manner in which the men were killed, landed like a bombshell in Turkey’s tense and divided politics. President Recep Tayyip Erdogan and his political allies condemned the attack, as opposition parties questioned why the government had failed to negotiate the men’s release and had risked a military operation to rescue them.

The P.K.K. said the deaths were caused by airstrikes during the Turkish military operation that began on Feb. 10. The Turkish minister of defense, Hulusi Akar, said the P.K.K. commander in charge had executed the men as soon as the operation began.

Twelve of the hostages who have been identified were junior members of the army and military police. All had been captured five or six years ago by the P.K.K. in a period after peace negotiations between the Turkish government and the Kurdish guerrillas had broken down.

The guerrillas often set up impromptu roadblocks on remote roads in areas of eastern and southeastern Turkey, and abduct members of the armed forces traveling on public buses or private cars to go home to visit their families and return to their bases.

The men found in the cave had been abducted and taken across the border into the mountains of northern Iraq, a region the P.K.K. has long used as a rear base.

Ozturk Turkdogan, head of the Turkish Human Rights Association said the organization had been in touch with 10 of the hostages’ families since 2015. But despite efforts to press for negotiations, the Turkish security services had been unyielding in their pursuit of military operations, he said. Speaking on Arti TV, he also criticized the P.K.K. for holding the hostages for so long.

The incident could prove politically damaging for Mr. Erdogan, but may also give him ammunition to whip up nationalist feeling and crack down on his opponents.

He called the mother of one of the slain soldiers during a speech broadcast on national television on Monday, promising to avenge her son’s death. His political ally, Devlet Bahceli, leader of the Nationalist Movement Party, vowed that anyone showing sympathy for the Kurdish group would be treated as a terrorist and accomplice.

Mr. Erdogan lashed out against the P.K.K. in his speech, and said the United States and the pro-Kurdish political party in Turkey were also responsible for the soldiers’ deaths.

He blamed the United States for supporting and arming the People’s Protection Units, or Y.P.G., an affiliate of the Kurdish group, which U.S. forces use to fight against the Islamic State in Syria, even though Washington, along with Turkey and the European Union, has designated the P.K.K. a terrorist group.

“If we are together with you in NATO, if we are to continue our unity, then you will act sincerely toward us,” Mr. Erdogan said in the speech, made to members of his party at a gathering in Rize, in Turkey’s Black Sea region. “Then, you will stand with us, not with the terrorists.”

The Turkish foreign ministry said it had summoned the American ambassador Monday to protest the conditional wording of a U.S. State Department statement on the incident, which read, “If reports of the death of Turkish civilians at the hands of the P.K.K., a designated terrorist organization, are confirmed, we condemn this action in the strongest possible terms.”

The pro-Kurdish Peoples’ Democratic Party, or H.D.P., is regularly accused of terrorism for its ties to the P.K.K. Mr. Erdogan’s criticism could signal of new wave of oppression against the party, which has seen many elected representatives and activists removed from their positions and detained.

Anadolu Agency, the state-run news service, reported that an investigation had been opened against two H.D.P. lawmakers, for “provocative” social media posts on the incident when news first broke of the killings on Sunday. The H.D.P. said Monday that 700 people, including party officials, had been detained overnight around the country.

Members of the H.D.P. and of the Human Rights Association have in the past worked to mediate with the P.K.K. and secure the release of hostages. The two lawmakers being investigated had met with families of the hostages.

The party called on the government and the P.K.K. to give an account of what happened in a statement Monday.

“Likewise, the P.K.K. should inform the public of Turkey and the world about how the captives lost their lives, which were entrusted to them, and about their responsibility for those deaths.”

The party also called for the P.K.K. to release other captives in their hands.