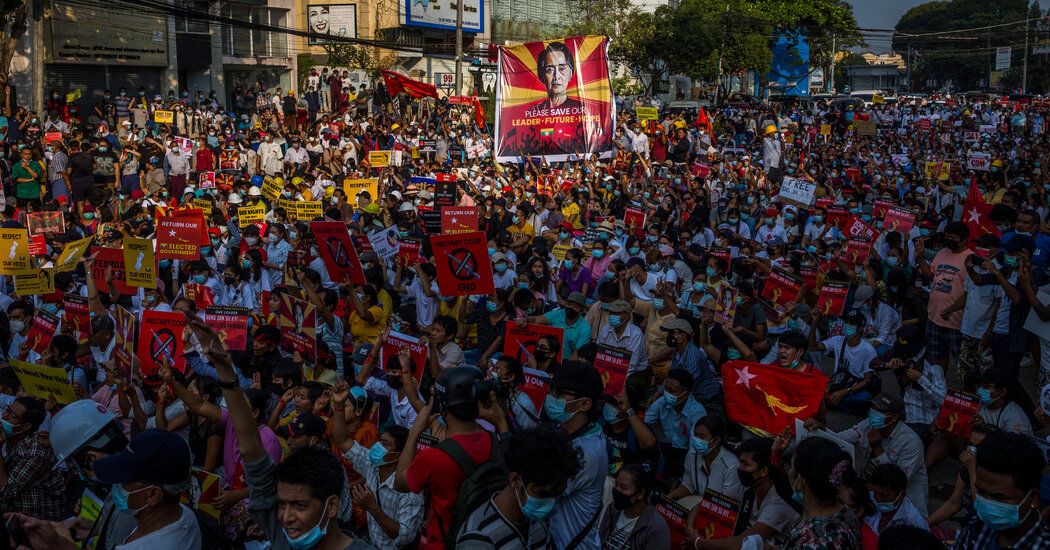 Myanmar’s coup leaders have called on hundreds of thousands of government employees — doctors, garbage collectors, electricity workers — to set their “emotion” aside, abandon their protests against the military and return to work.

But on Monday, even after the army had put armored vehicles in the street in a nighttime show of power, the workers displayed little interest in returning to their jobs.

The work stoppages, which appear to be growing, are undermining the ruling generals as they try to assert their authority over the population after seizing power two weeks ago.

The walkouts have been especially notable among government employees, including at the ministry that provides power nationwide, tax offices and the General Administration Department, which oversees a wide range of public services and government functions.

“There is no way we can work under a dictatorship,” said Dr. Kyaw Zin, a surgeon who led one of the nation’s first walkouts at the government-run Mandalay General Hospital. “I am pretty sure we can bring down the regime.”

The civil disobedience movement, or C.D.M., as it is known, has widespread support across the country. It targets the military’s extensive business interests and government functions essential to military rule, as well as encompassing street demonstrations and a noisy new evening ritual of banging on pots and pans.

The huge outpouring of support is all the more impressive given the military’s brutal history of gunning down pro-democracy protesters in 1988 and 2007. One expert on the government’s civil service system estimated that the country had about one million civil servants and that about three-quarters of them had walked off their jobs. Many are essential in keeping the country running.

On Monday morning, soldiers began appearing on the streets of Yangon, Myanmar’s largest city, and Mandalay in place of police officers in prominent locations, including near Yangon’s Central Bank headquarters.

Overnight, the military had stationed armored vehicles in downtown Yangon, apparently to intimidate the protesters. Instead, people placed placards on the vehicles with slogans like “We Do Not Want Military Government,” and posed with them for group photos.

To prevent the police from reaching one protest site on Monday, motorists parked their cars in the street and raised the hoods as if to signal they had engine problems, creating a traffic jam.

Senior Gen. Min Aung Hlaing, the leader of the Feb. 1 coup, had issued the call for government workers to return to work last week, saying they had been incited by “unscrupulous persons.”

“We will never go back to work until he steps down,” said Dr. Kyaw Zin, the surgeon who led one of the first walkouts. “He has no right to tell us to come to work, because no one recognizes him as the leader. He must step down. This must be the last coup in Myanmar. We will fight for that.”

The doctor also noted that his patients could come to see him at a private hospital at no cost.

Yangon residents have begun taking their household trash to neighborhood garbage bins themselves after home pickup was halted by the trash collectors’ walkout.

Consumers have also begun boycotting businesses owned by the military, including once-popular Myanmar Beer and a chain of gold and jewelry stores owned by a member of the military’s new ruling body, the State Administration Council.

At the Ministry of Electricity and Energy, the nation’s power provider, about 60 percent of employees have joined the movement and walked off their jobs, said U Pyae Sone Ko Ko, a lineman who has stopped working.

A large number of employees are meter readers, he noted, and if they don’t do their jobs, the ministry cannot send out bills.

Some ministry employees who have stopped working have stationed themselves at their offices at night to prevent the authorities from shutting off electricity before leading nighttime raids and arrests.

Other ministry workers have been encouraging customers not to pay their bills, noting that the ministry cannot legally shut off their electricity for lack of payment for three months.

“We have to take part in the C.D.M. to stop the regime and take down the dictatorship,” Mr. Pyae Sone Ko Ko said.

Similarly, at private banks, many workers have walked off the job in the hope of bringing the regime to its knees by impeding transactions and slowing the economy.

“If we stop going to work, the economic sector will stop working,” said Daw Thandar Kyaw, a bank employee who joined the walkout. “Min Aung Hlaing and the military dictators care about the economy because they love money. I strongly believe that we can bring down the dictators if all bank staff join the C.D.M.”

In Mandalay on Monday afternoon, hundreds of protesters gathered outside offices of the state-run Myanmar Economic Bank and urged employees to join the walkout. Soldiers and police officers broke up the protest, chasing some demonstrators into nearby houses and beating them.