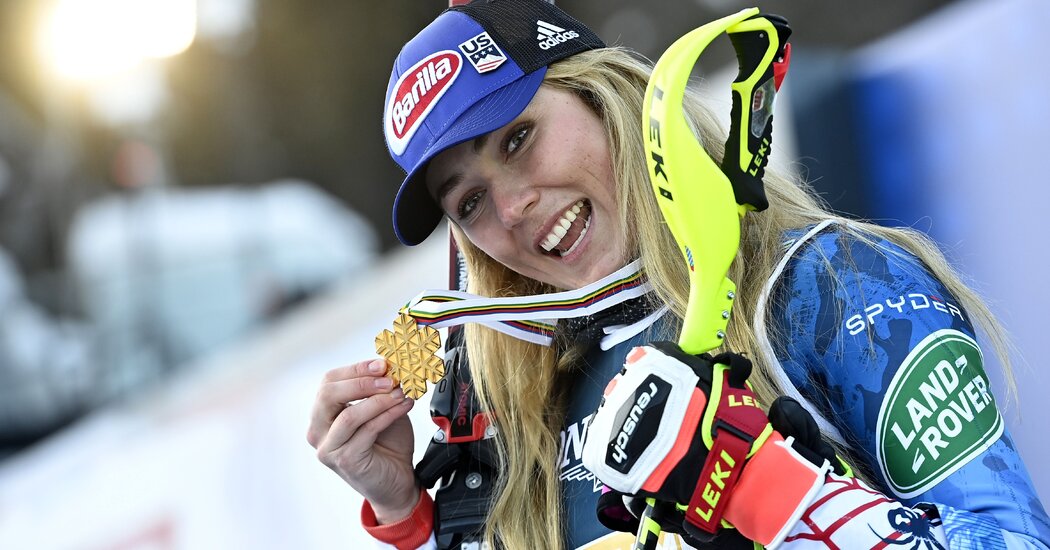 Mikaela Shiffrin cemented her claim as the best American Alpine skier ever by winning her record-breaking sixth world championship on Monday.

Shiffrin won the combined event in Cortina d’Ampezzo, Italy, to reach the milestone. Opening with a third place in the super-G portion of the event, she tore down an icy course in her specialty, the slalom, making up a small deficit to win by 0.86 of a second.

“For sure it was a tough slalom,” Shiffrin told reporters. “So I’m really happy I got down with a really good run.”

The worlds are the last major championship before the 2022 Beijing Winter Olympics, which begin in less than a year.

It has been a challenging 12 months for Shiffrin. In February, her father, Jeff, died in an accident at the family’s home in Colorado. Shiffrin raced home from Europe, where she was competing, and then took six weeks off.

She was just about to begin her return to the World Cup tour when the skiing season was canceled because of the coronavirus pandemic. As a result of the missed races, Shiffrin was unable to claim a fourth straight World Cup title.

“When you’re sitting on a plane trying to get home to see your dad who is dying, that is the epitome of what’s worth worrying about,” she said in the fall. “Everything else pales in comparison, especially worrying if I’m going to win a race or not.”

Shiffrin, 25, is only the second American woman to win the combined at the world championships, after Tamara McKinney in 1989. Shiffrin had previously won four slalom golds and one super-G at the worlds. Those five titles had tied her with Ted Ligety, who announced his retirement last week, for the most by an American.

She has nine world championship medals overall, also an American record. Only three women and three men have won more.

Shiffrin also has two Olympic gold medals, in the slalom at Sochi in 2014 and in the giant slalom in Pyeongchang in 2018.

“I’ve done some things nobody’s done before, for sure,” Shiffrin said in a post-race television interview on Monday. “I’ve always been trying to just push the limit, push my own limit first, then trying to push the limit in the sport. I feel like, on my really good days, I’m doing that.”

Petra Vlhova of Slovakia won the silver medal on Monday and Michelle Gisin of Switzerland the bronze.

Shiffrin might not be done adding medals to her record total. Still to come are the giant slalom on Thursday, followed by the slalom, which Shiffrin has won four straight times, on Saturday.