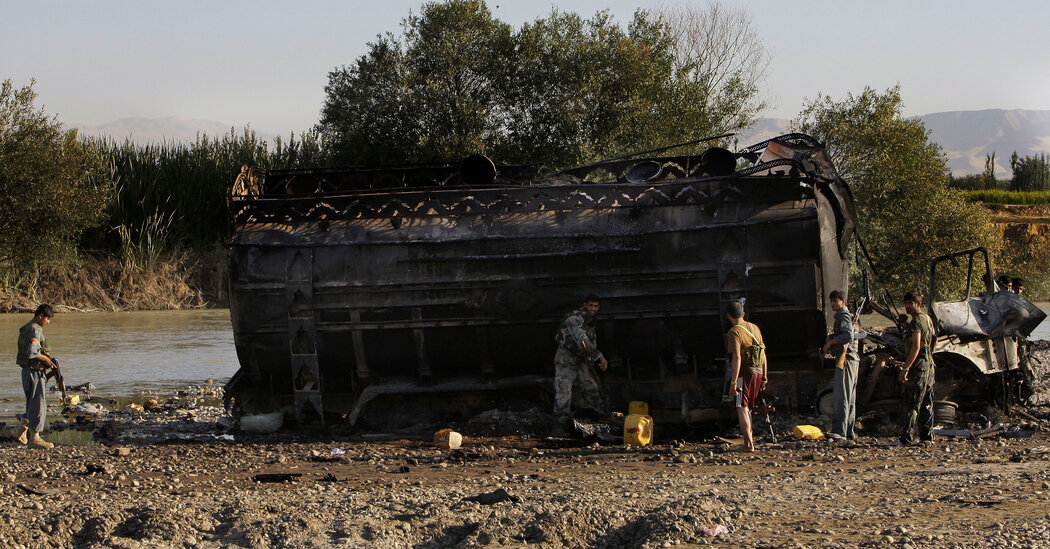 BERLIN — The European Court of Human Rights ruled on Tuesday in favor of Germany in a dispute with Afghan civilians who challenged the country’s investigation into a 2009 attack on oil tankers in Afghanistan that killed as many as 90 civilians.

The court, based in Strasbourg, France, ruled that the German investigation into the bombing did not violate the European human rights convention.

On the night of the attack, Sept. 3, 2009, Taliban fighters hijacked two tankers carrying NATO fuel and then got stuck on a sandbank in the Kunduz River, about four miles from the NATO base in the northern city of Kunduz.

Col. Georg Klein, a German who at the time was commander of the NATO base in Kunduz, called in U.S. military planes to bomb the tankers, saying that he believed that only insurgents were in the area and that he feared the Taliban could use the tankers to carry out attacks. But dozens of local Afghans had swarmed the tankers, invited by the Taliban to siphon off fuel.

A German Army investigation later determined that as many as 90 civilians had been killed. At the time of the attack, Germany was widely criticized by its partners in Afghanistan, and the events plunged the country into a bitter debate about the role of its military forces during peacetime.

But over the past decade, German prosecutors have declined to press charges against the commander, and courts have upheld the decision and denied survivors the right to demand compensation from the government.

Abdul Hanan, whose sons, Abdul Bayan, 12, and Nesarullah, 8, were killed in the 2009 airstrike, brought the case before the European court after several lawsuits in the German judicial system.

“They martyred a hundred people, they bombed us unjustly, so how can they come to this unjust decision?” Mr. Hanan, a farmer, said by telephone from Kunduz after he learned of the court’s ruling.

“Is our blood worth less than the blood of a German?” said Mr. Hanan, who has eight other children. He said he had expected the court to rule in his favor and to grant him and other family members more payments.

“I wanted the court to provide justice, to have mercy on us,” he said.

He accused the commander of failing to sufficiently investigate the potential threat posed to civilians before ordering the strike and argued that Germany had protected Colonel Klein and others he claimed were responsible for covering up the airstrike.

He also claimed that he lacked a path to challenge the decision of Germany’s federal prosecutor to drop an investigation last year against the colonel.

Immediately after the attack, the German government paid $5,000 in compensation to families of civilian who were killed or seriously injured. But Mr. Hanan sought further damages as well as recognition of Germany’s failure to protect Afghan civilians.

In 2018, Germany’s top civil court ruled that, under international law, a state was not obligated to pay out compensation to individuals. The court also found that the state could not be held liable for instances of dereliction of duty by soldiers serving on foreign missions.

The European court found that the federal prosecutor’s decision to drop an investigation into the commanding general was justified “because he had been convinced, at the time of ordering the airstrike, that no civilians had been present” at the attack site.

The German Parliament held a public investigation into the bombing, which has also been challenged in several German courts.

The European court’s ruling comes as the Biden administration is debating whether to honor a deal that President Donald J. Trump struck with the Taliban last year. Germany entered Afghanistan alongside its NATO allies in 2001, and up to 1,300 of its troops are still serving there with 2,500 U.S. counterparts.