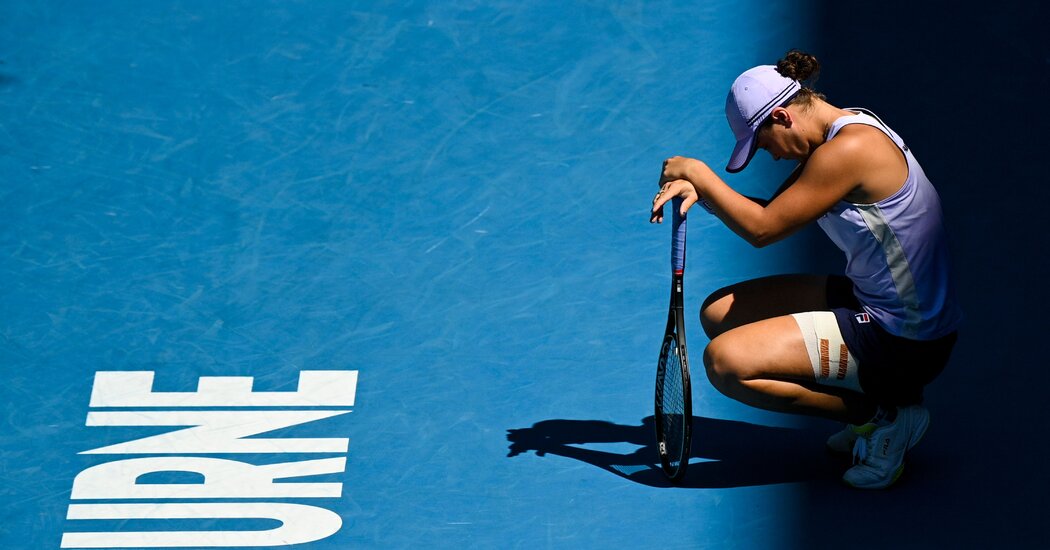 The top-seeded Ashleigh Barty, who represented her country’s best chance for a homegrown Australian Open champion, lost in the quarterfinals on Wednesday, falling 1-6, 6-3, 6-2, to the 25th-seeded Karolina Muchova of the Czech Republic.

Barty began the match in dominant form, leading Muchova by a set and a break at 6-1, 2-0 at Rod Laver Arena.

Muchova took an off-court medical timeout early in the second set, with doctors checking her vital signs and cooling her down with ice.

“My head was spinning, so I took a break,” Muchova said in her on-court interview after the match.

As Barty faltered, Muchova played with increasing poise and patience, exemplified by one rally in the second set in which she hit five overhead smashes before Barty finally made an error.

Barty’s focus continued to drift in the third set. She made many errors on shots that should have been simple, not adjusting well to Muchova’s changes of pace. Barty seemed to regain her concentration in the final game, earning three break points, but she could not convert any of them.

Muchova closed out the victory with an ace on her first match point. Muchova, a rare player who can match Barty’s all-court play and versatility, was playing in her second Grand Slam quarterfinal after making it to that round at Wimbledon in 2019.

Barty’s departure from a court that hosted no fans for a fifth consecutive day was a blow for the tournament. Fans had been kept from the grounds for five days after a so-called circuit breaker lockdown imposed by the government because of a small coronavirus outbreak, but they are set to be allowed to return Thursday for the semifinals.

Barty did not travel internationally to rejoin the tour when it resumed last year from its pandemic pause, but she retained her No. 1 ranking because the WTA largely froze its ranking system and her points from winning the French Open and the WTA Finals in 2019 did not expire.

Barty had won a tournament, the Yarra Valley Classic, held in Melbourne the week before the Australian Open began. She had struggled with a left leg injury early in the tournament that forced her to withdraw from the doubles draw to reduce her workload, but showed few ill effects from it in the second week of the tournament.

Barty’s exit means that there will be a player ranked outside the Top 20 in the Australian Open final. Muchova will face an American, either the 22nd-seeded Jennifer Brady or unseeded Jessica Pegula, in the semifinals.