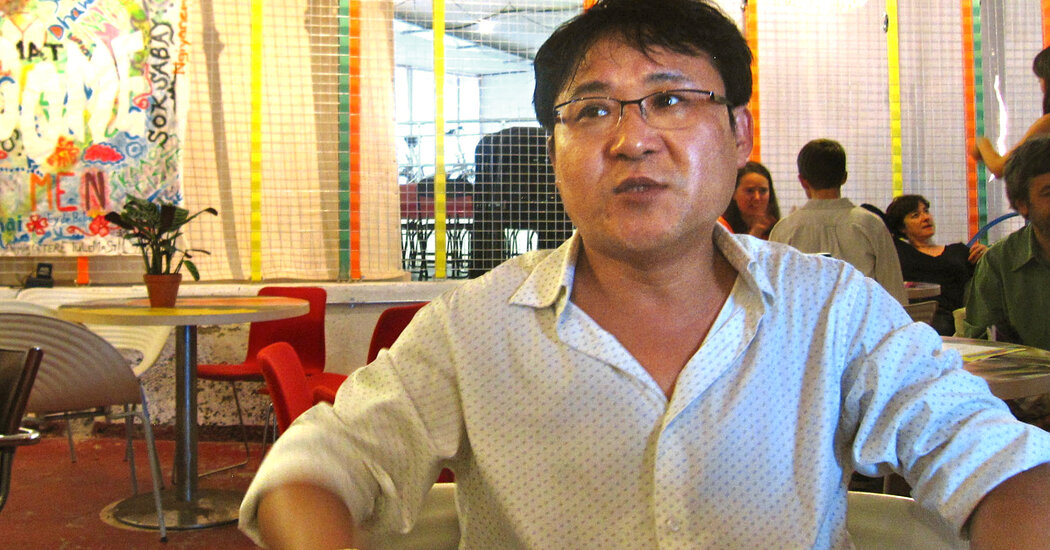 SEOUL, South Korea — ​He has lectured in European universities and appeared on the cover of a ​British ​magazine​. His book was translated into a dozen languages. He was once a guest on CNN.

Jang Jin-sung is one of the most internationally recognized defectors from North Korea. His ​​2014 memoir, “Dear Leader,” enthralled readers with what he said were firsthand descriptions of a private party held by Kim Jong-il, the former North Korean leader, and claims of what it was like to be one of the few “poet laureates” chosen to write propaganda​ ​about ​​the Kim ​family.

But two women say his heroic tale of escape from the authoritarian country masked a secret. Both have accused Mr. Jang of raping them in South Korea after he defected, and they said that he had used his celebrity status to prey on them.

One woman, a North Korean defector, has filed a lawsuit accusing both Mr. Jang and one of his associates of rape and other sex crimes. The other woman came forward with allegations this week in interviews with The New York Times and other media outlets in South Korea. She has not filed a formal complaint with the police against Mr. Jang, and said her main intention was to show solidarity with the other woman.

That case is now going through the court. The two lawsuits filed by the North Korean woman are under investigation by the police, which will then decide whether to prosecute. The authorities are also looking into the countersuit by Mr. Jang’s associate.

A series of prominent South Korean men have been convicted of sexual assault in recent years as the country’s #MeToo movement began taking root. It has helped expose what experts see as a pervasiveness of sexual exploitation across the country. The dangers can be especially pronounced among North Korea women who, because of their circumstances as defectors, may find themselves with little recourse.

In 2016, Mr. Jang ran a website in South Korea called New Focus International, which specialized in North Korea news. That year, he proposed an interview with Sung Sel-hyang, a little-known defector from North Korea who ​ran an online shop for children’s clothes​ while attending a college in Seoul​.

Ms. Sung said she felt both surprised and grateful for the attention. But she said that she was never featured on Mr. Jang’s website.

Instead Ms. Sung claims in a lawsuit that when she first met Mr. Jang in 2016, he got her drunk and asked his South Korean associate to take her home. Ms. Sung alleges the man took her to his own apartment and raped her.

In a separate lawsuit, Ms. Sung said that Mr. Jang raped her in a Seoul hotel room a month later. According to the legal filings, when she tried to resist, he used a photo of her naked in bed that had been taken by Mr. Jang’s associate without her knowledge, and threatened to upload the image on her school’s website.

Ms. Sung said in the legal filings that Mr. Jang continued to use the photo as blackmail and raped her three more times over the course of a few months. He also offered her to two South Korean men whose friendship or financial support he had cultivated, according to her suit.

“I felt ashamed ​by what had happened to me ​and I thought no one would support me​,” Ms. Sung, 32, said in an interview. “To me he was such a powerful figure that I thought I would have no chance fighting him​.”

She had contact with Mr. Jang throughout the years, but decided to come forward last month in a television appearance on the South Korean TV station MBC. After that, she filed suit against both Mr. Jang and his associate, prompting the police to open a formal investigation.

MBC was the first to broadcast the accusations against Mr. Jang. He has since posted statements on Facebook and YouTube vehemently denying the claims and challenged “any female North Korean defectors to report me to the police if I sexually assaulted them.”

A native South Korean woman, Kang Haeryun, ​32, spoke out this week and said that Mr. Jang had raped her while she worked as an editor for his website in 2014.

“I have tried to suppress my traumatic memories ​for six years, but I decided to ​come out and render solidarity ​to Sung Sel-hyang because we survivors of rape must fight together,” said Ms. Kang in an interview. ​

Ms. Kang said the alleged rape took place at the apartment of one of Mr. Kang’s friends ​on Nov. 18, 2014, roughly two years before the #MeToo movement began in South Korea. She confided in two friends about what happened shortly afterward, she said. The two friends confirmed in interviews with The Times that she did.

“She said he came on top of her and she said ‘​no’ but he proceeded,” said Hahna Yoon, one of the friends. “I said that’s rape. ”​ Another friend, Kim Hyeon-kyeong, said that Ms. Kang told her that Mr. Jang had sexually attacked her, and that she left her job because of it.

Ms. Kang said it had taken her years to realize she was a victim, and that she never went to the police because she initially felt powerless in the face of Mr. Jang’s fame and later lived in self-hatred.

Mr. Jang denied raping Ms. Kang and said in an interview that his relationship with her had been consensual.

Although she does not plan to file a lawsuit against Mr. Jang because of the likelihood of a protracted legal battle, Ms. Kang said she was willing to be questioned by the police as part of their investigation. Her motive for coming forward in an interview, she said, was to support Ms. Sung.

While South Korean women have pushed to hold sexual predators to account in recent years, the plight of female North Korean defectors been less public.

About 72 percent of the 33,700 North Korean defectors who have fled to the South are women, according to government data. Many fall prey during their perilous journey. Even after they arrive in ​the ​South, they remain vulnerable to sexual ​violence, especially from fellow defectors, ​said​ human rights experts.

Defectors usually socialize ​within their own tightly knit community, where victims of sexual violence feel pressured to keep silent, said Jeon Su-mi, a lawyer for female defectors who are victims of sex crimes. ​

Celebrity male defectors — former high-ranking officials, survivors of North Korean prison camps, authors and activists, among them — wield enormous influence in this community, Ms. Jeon said. Some use their ​status to sexually abuse female defectors, especially ​those who have just arrived.

“I have seen these men groping young female defectors ​during the wining and dining in the evening and later taking them to motels​ for what they call a ‘second round,’” she said. ​

​Ms. Sung said her mother died when she was five​ and that she sold hats in the market​ until she and her grandmother fled ​North Korea in 2006. Her dream of building a new life in the South, she said, turned into a nightmare after meeting Mr. Jang. She said she burned herself with cigarettes out of despair.

But Ms. Sung also said that a businessman introduced to her by Mr. Jang last fall had become one of her biggest supporters, that the two of them had fallen in love and that he had encouraged her decision to come forward.

Mr. Jang has accused the man of manipulating Ms. Sung into making false statements, described himself as a “matchmaker” and said that the allegations against him were “a scam.”

“It was she who asked me to introduce her to a rich South Korean man,” he said, referring to Ms. Sung. “I am not a sexual criminal.”

Mr. Jang is best known in South Korea for his heart-rending poem, “I Sell My Daughter For 100 Won,” about a North Korean mother trying to find a new family for her daughter before she dies of cancer.

Despite being one of the most well-known North Korean defectors, Mr. Jang has faced relatively little public scrutiny over his biography. In the English version of “Dear Leader,” for example, Mr. Jang describes himself as a North Korean “poet laureate,” but fellow defectors have privately doubted for years that he ever held such a title.