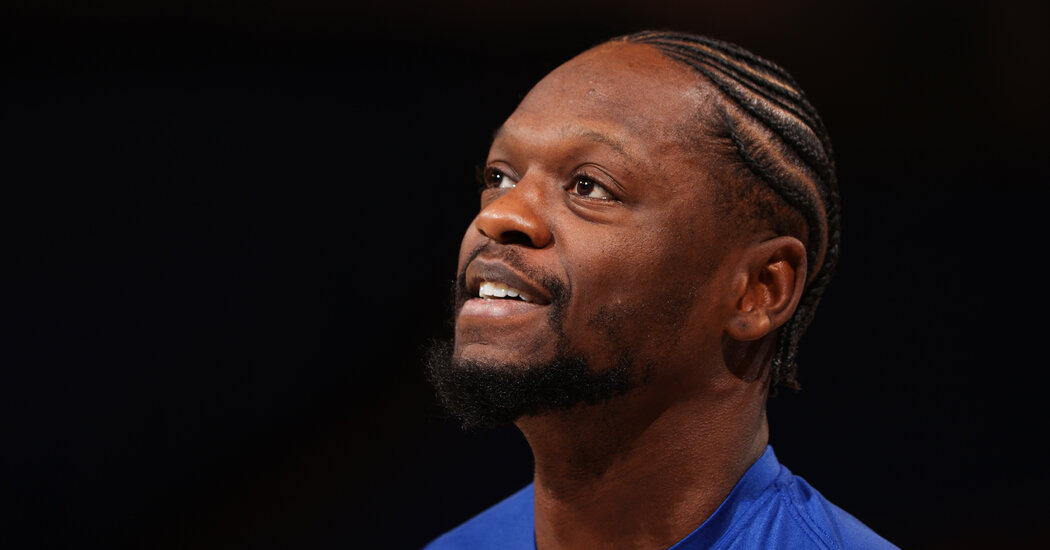 One of Julius Randle’s earliest tormentors on the basketball court was his mother, Carolyn Kyles. Once, when Randle was in fourth grade, Kyles teamed up with Randle’s older sister, Nastassia Caldwell, in a game of two-on-two against Randle and one of his friends.

“I was throwing hook shots on him,” said Kyles, who once played for the University of Texas at Arlington. “She was passing me the ball and I’m knocking him around and he got so mad because they were losing. And I threw his sister the ball and he went up to her and just slammed her down on the court after blocking her shot. I’m like, ‘Really, Julius?’”

She added: “I couldn’t take it easy on him. I had to teach him how to stay strong on the court.”

Now, Randle is the bully. A bulky 26-year-old in his seventh N.B.A. season, he has made a living in the league by combining an overpowering 6-foot-8 physique with finesse to outwork taller players.

“How I approach the game, and how I play hard and try to leave everything out there on the court, I get from her,” Randle said of his mother.

This season, Randle’s second with the Knicks, has been a revelation: He is averaging career highs in points, rebounds and assists, making a serious push to be the team’s first All-Star since Kristaps Porzingis in 2017-18. After an underwhelming campaign last year, Randle is providing hope to a beleaguered fan base as the best player on a Knicks team that might make the playoffs for the first time since 2012-13. He bolstered his credentials with a dominant 44-point performance on Monday against the Atlanta Hawks.

And yet Randle’s contract is up after next season, and his future with the franchise is unclear, an unusual position for a potential All-Star entering his prime. Tom Thibodeau, the Knicks coach, has spoken about needing at least one more star and wanting the team to be “aggressive” in pursuing other players. Randle could be anything from a cornerstone to a player traded for a cornerstone. But Randle wants to wear a Knicks jersey for years to come, an encouraging sign for a franchise that has long struggled to attract top free agents.

“I knew where we were starting at,” Randle said. “I knew the challenge I had when I signed here. I signed here with the hopes of being here long term. I want to be one of the guys that’s part of this team and eventually, hopefully, we are competing for championships and winning championships. That’s my dream. A picture perfect thing for me.”

Randle’s journey to New York began in Texas, where he first began playing basketball at age 3. A Dallas native, he grew up with his sister and Kyles, who described him as a confident, outgoing gym rat. Randle eschewed parties for basketball practice, Kyles said.

“Being that he played basketball, he was around a lot of coaches or other fathers that he was able to talk to or maybe I felt they could say the exact same things that I would say,” Kyles said. “And it would be so much clearer to him coming from a male’s voice. So he always had mentors.”

But Randle’s mother remained his biggest influence. When Randle first started playing basketball, he wore the No. 8 of his idol, Kobe Bryant. But one day — again in fourth grade — Randle walked in the kitchen and asked what number Kyles wore. She said: “Thirty. Why?”

“‘Then can I have that number?’” Kyles recalled Randle asking. She snapped back: “Well, if you’re going to do something with it, yeah. If not, leave my number alone.”

Now she says, “I guess he did do something with it.”

Randle took that number to the University of Kentucky, where he played one standout year under John Calipari. (Randle’s 4-year-old son, Kyden, also now wears the number in his blossoming basketball career.)

“If you’re around a young man and you see the desire, the heart, the fight, you tell people, ‘Whatever you think he’s going to be, it will be more,’” Calipari said. “There are other guys that you coach that it either came really easy for or they were still learning that competitiveness of, ‘it’s either him or me.’ Julius had it.”

Strong college play landed Randle a new No. 30 jersey: The Los Angeles Lakers selected him with the seventh pick in the 2014 draft, teaming Randle with his idol, Bryant, who was nearing the end of his career. But Randle’s career began on an extraordinarily difficult note: He broke his right leg just 14 minutes into his N.B.A. debut. He did not play another game that season, but he never doubted he would recover fully.

“It just sucked because it was my first game my rookie year,” Randle said.

Kyles, who saw the injury in person, felt obligated to be optimistic about what she called a “devastating moment.” She immediately went to meet him and stayed with him as he had X-rays taken.

“We feed off each other, and so I know that if I showed any sign of fear that he wouldn’t have been able to make it back on the court,” Kyles said. She continued: “Of course, when I was by myself, and I was in a room, I cried. I cried with my daughter. But when I faced him, I just put this strong face on.”

Randle did make it back the next year, missing only one game. And in the ensuing seasons, he developed a reputation for his strong work ethic and for keeping his body in shape.

But his career over all has been mostly one of transitions. In four years in Los Angeles, he was often the subject of trade rumors on a seemingly rudderless Lakers team struggling to move out of the Bryant era. In July 2018, Randle signed as a free agent with the New Orleans Pelicans. He was slated to be a part of one of the most talented frontcourts in the league alongside Anthony Davis, the franchise star. Except Davis wanted out of New Orleans, creating a testy situation and a franchise in flux. Randle left New Orleans after one season and signed with the Knicks.

In Randle’s first year, he struggled, in part because he didn’t have the right complementary pieces around him. There also seemed to be constant turmoil surrounding the franchise, including Coach David Fizdale’s firing less than two months into the season. This season, the Knicks have stabilized behind the team president, Leon Rose, and Thibodeau. Randle said Thibodeau has been “like a perfect match.”

“Honestly, Thibs is a dog,” Randle said. “He’s a guy that is an extreme competitor and very aware of everything that’s going on. Takes each possession like it’s our last, and really coaches with the type of intensity and passion that you want from a coach.”

This Knicks season isn’t just a refreshing change of pace for fans, but for Randle as well. For someone who hates losing, he has become intimately familiar with it. In each of his six previous seasons, Randle’s teams never finished higher than 11th in the conference. He’s not solely, or even mostly, to blame for that, but the fact remains: Randle has never played for a winning team. This season is his best opportunity.

“When we come to the game, we feel like we have a chance to win every game,” Randle said. The Knicks were 14-15 entering Wednesday’s game against the Orlando Magic, good enough for sixth in the Eastern Conference.

If Randle gets his way, he may be on his way to attaining something few recent Knicks have: the approval of Knicks fans. Former Knicks like Patrick Ewing, John Starks, Charles Oakley, Allan Houston (Randle counts him as a mentor) and Carmelo Anthony are still beloved, but all except Anthony are from an era when Knicks wins weren’t so hard to come by. For Randle, wearing a No. 30 jersey at the All-Star Game on behalf of the Knicks may go a long way toward cementing his approval with fans.

“It’d be amazing, man,” Randle said. “You put in a lot of work and sacrifice and dedication to your craft. So for you to receive those accolades or whatever it may be and be recognized as such would be a great feeling.”

“And especially as a Knick.”