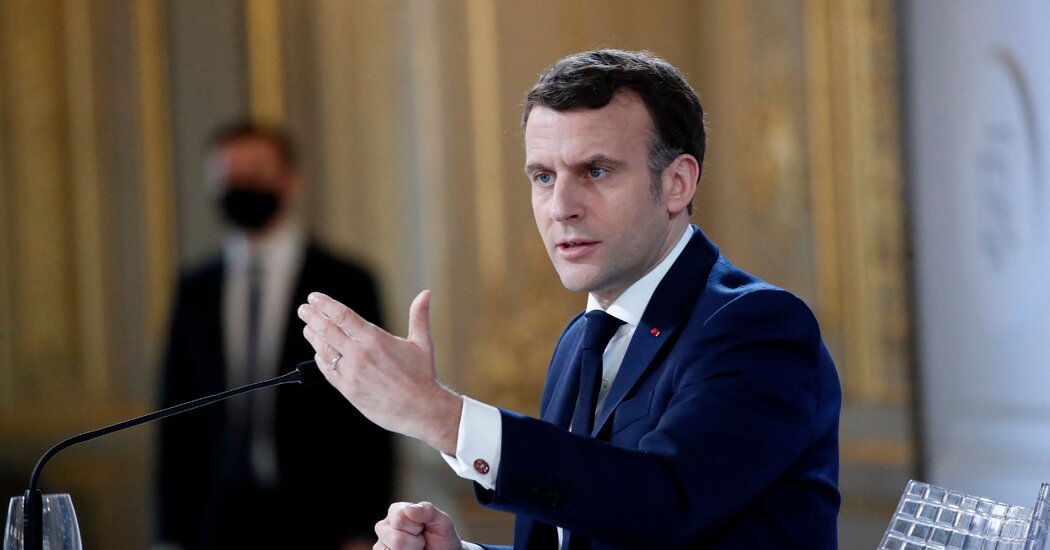 PARIS — Stepping up its attacks on social science theories that it says threaten France, the French government announced this week that it would launch an investigation into academic research that it says feeds “Islamo-leftist’’ tendencies that “corrupt society.’’

News of the investigation immediately caused a fierce backlash among university presidents and scholars, deepening fears of a crackdown on academic freedom — especially on studies of race, gender, post-colonial studies and other fields that the French government says have been imported from American universities and contribute to undermining French society.

While President Emmanuel Macron and some of his top ministers have spoken out forcefully against what they see as a destabilizing influence from American campuses in recent months, the announcement marked the first time that the government has moved to take action.

It came as France’s lower house of Parliament passed a draft law against Islamism, an ideology it views as encouraging terrorist attacks, and as Mr. Macron tilts further to the right, anticipating nationalist challenges ahead of elections next year.

Frédérique Vidal, the minister of higher education, said in Parliament on Tuesday that the state-run National Center for Scientific Research would oversee an investigation into the “totality of research underway in our country,’’ singling out post-colonialism.

In an earlier television interview, Ms. Vidal said the investigation would focus on “Islamo-leftism’’ — a controversial term embraced by some of Mr. Macron’s leading ministers to accuse left-leaning intellectuals of justifying Islamism and even terrorism.

“Islamo-leftism corrupts all of society and universities are not impervious,’’ Ms. Vidal said, adding that some scholars were advancing “radical” and “activist” ideas. Referring also to scholars of race and gender, Ms. Vidal accused them of “always looking at everything through the prism of their will to divide, to fracture, to pinpoint the enemy.’’

France has since early last century defined itself as a secular state devoted to the ideal that all of its citizens are the same under the law, to the extent that the government keeps no statistics on ethnicity and religion.

A newly diversifying society, and the lasting marginalization of immigrants mostly from its former colonies, has tested those precepts. Calls for greater awareness of discrimination have met opposition from a political establishment that often views them as an invitation to American multiculturalism and as a threat to France’s identity and social cohesion.

In unusually blunt language, the academic world rejected the government’s accusations. The Conference of University Presidents on Tuesday dismissed “Islamo-leftism’’ as a “pseudo notion” popularized by the far right, chiding the government’s discourse as “talking rubbish.’’

The National Center for Scientific Research, the state organization that the minister ordered to oversee the investigation, suggested on Wednesday that it would comply, but it said it “firmly condemned” attacks on academic freedom.

The organization said it “especially condemned attempts to delegitimize different fields of research, like post-colonial studies, intersectional studies and research on race.’’

Opposition by academics hardened on Thursday, when the association that would actually carry out the investigation, Athéna, put out a sharply worded statement saying that it was not its responsibility to conduct the inquiry.

The seemingly esoteric fight over social science theories — which has made the front page of at least three of France’s major newspapers in recent days — points to a larger culture war in France that has been punctuated in the past year by mass protests over racism and police violence, competing visions of feminism, and explosive debates over Islam and Islamism.

It also follows years of attacks, large and small, by Islamist terrorists, that have killed more than 250 French, including in recent months three people at a basilica in Nice and a teacher who was beheaded.

While the culture war is being played out in the media and in politics, it has its roots in France’s universities. In recent years, a new, more diverse generation of social science scholars has embraced studies of race, gender and post-colonialism as tools to understand a nation that has often been averse to reflect on its history or on subjects like race and racism.

They have clashed with an older generation of intellectuals who regard these social science theories as American imports — though many of the thinkers behind race, gender and post-colonialism are French or of other nationalities.

Mr. Macron, who had shown little interest in the issues in the past, has won over many conservatives in recent months by coming down hard against what he has called “certain social science theories entirely imported from the United States.’’

In a major speech on Islamism last fall, Mr. Macron talked of children or grandchildren of Arab and African immigrants “revisiting their identity through a post-colonial or anticolonial discourse’’ — falling into a trap set by people who use this discourse as a form of “self-hatred’’ nurtured against France.

In recent months, Mr. Macron has moved further to the right as part of a strategy to draw support from his likely main challenger in next year’s presidential election, Marine Le Pen, the far-right leader. Polls show that Mr. Macron’s edge has shrunk over Ms. Le Pen, who was his main rival in the last election.

Chloé Morin, a public opinion expert at the Fondation Jean-Jaurès, a Paris-based research group, said that Mr. Macron’s political base has completely shifted to the right and that his minister’s use of the expression Islamo-leftism “speaks to the right-wing electorate.”

“It has perhaps become one of the most effective terms for discrediting an opponent,” Ms. Morin said.

Last fall, Mr. Macron’s ministers adopted a favorite expression of the far right, “ensauvagement,’’ or “turning savage,’’ to decry supposedly out-of-control crime — even though the government’s own statistics showed that crime was actually flat or declining.

Marwan Mohammed, a French sociologist and expert on Islamophobia, said that politicians have often used dog-whistle words, like “ensauvagement’’ or “Islamo-leftism,’’ to divide the electorate.

“I think the government will be offering us these kinds of topics with a regular rhythm until next year’s presidential elections,’’ Mr. Mohammed said, adding that these heated cultural debates distracted attention from the government’s mishandling of the coronavirus epidemic, the economic crisis and even the epidemic-fueled crisis at the nation’s universities.

The expression “Islamo-leftism” was first coined in the early 2000s by the French historian Pierre-André Taguieff to describe what he saw as a political alliance between far-left militants and Islamist radicals against the United States and Israel.

More recently, it has been used by conservative and far-right figures — and now by some of Mr. Macron’s ministers — against those they accuse of being soft on Islamism and focusing instead on Islamophobia.

Experts on Islamophobia examine how hostility toward Islam, rooted in France’s colonial experience, continues to shape the lives of French Muslims. Critics say their focus is a product of American-style, victim-based identity politics.

Mr. Taguieff, a leading critic of American universities, said in a recent email that Islamophobia, along with the “totally artificial importation’’ in France of the “American-style Black question” sought to create the false narrative of “systemic racism’’ in France.

Sarah Mazouz, a sociologist at the National Center for Scientific Research, said that the government’s attacks on these social theories “highlight the difficulty of the French state to think of itself as a state within a multicultural society.”

She said the use of the expression “Islamo-leftism” was aimed at “delegitimizing” these new studies on race, gender and other subjects, “so that the debate does not take place.”