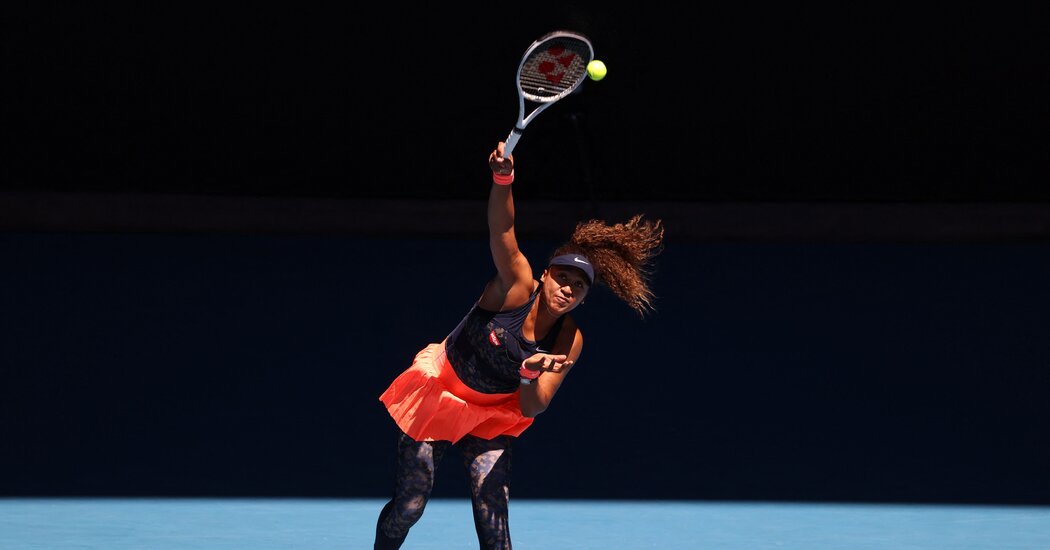 MELBOURNE, Australia — One Australian Open finalist spoke about how intimidating it was to serve against Serena Williams and also volunteered that she was guilty of mindless eating during her mandatory 14-day quarantine. That would be Naomi Osaka, who is 3 for 3 in Grand Slam finals.

The other acknowledged envisioning her post-match celebration before her semifinal was won, causing her to lose focus, and also offered that she didn’t binge-watch any shows on her 14-day lockdown, because she knew that would lead to lazing around in bed all day.

That would be Jennifer Brady, a former U.C.L.A. standout who became the first woman to come through the college ranks to advance to a Grand Slam final since Kathy Jordan at this tournament in 1983.

The women’s singles final at the Australian Open will feature the most relatable high-octane servers with hammering groundstrokes that you would ever want to meet (just not on the court).

Osaka, 23, and Brady, 25, have displayed ruthless power in their matches and disarming vulnerability in their news conferences. Their egos don’t appear to be Faberge eggs in need of careful handling, constant caressing and everyone’s adoring gaze.

They don’t pretend that they’re impervious to pressure or act like they are all-knowing. They don’t seem to act at all.

Osaka staved off two match points in a fourth-round three-setter against Garbiñe Muguruza and didn’t panic when she faced a break point while trailing Williams by 0-2 in the first set of their semifinal. She has improved her mental toughness, she said, by talking to her coach, Wim Fissette, and “expressing the nerves that I feel instead of bottling it all up and trying to deal with it by myself.”

Brady squandered four match points on Thursday before dispatching Karolina Muchova in three sets. “I was just so nervous,” she said. “I couldn’t feel my legs. My arms were shaking. I was just hoping she would miss, and she didn’t.”

Brady also owned up to the cardinal sin of getting ahead of herself. “I was just thinking about the occasion and the end result,” said Brady, who served out the match in an 18-point game that included three break points and five match points.

She appeared to have won on her second match point when she hit a backhand that Muchova dumped into the net. Brady dropped to her knees in relief and disbelief only to discover that the electronic technology system showed her shot had landed a thumbnail outside the line.

If the live electronic line calling system, delivered through remote tracking cameras positioned around the Melbourne Park courts and introduced at this tournament, had been instituted at last year’s United States Open, one of the best matches of the season, involving Brady and Osaka, might have unfolded differently.

It was Brady’s Grand Slam semifinal debut, and she and Osaka wielded their rackets like torches, sending fireballs back and forth from the baseline. Osaka won the first set in a tiebreaker, and Brady evened the match in the second.

Osaka didn’t break Brady’s serve until the third set when, leading by 2-1, she jumped out to a 15-40 lead, then secured the break when Brady hit a shot that was called out. Brady didn’t challenge the call. It turned out the ball was in. Brady went on to lose, 6-3, and Osaka went on to defeat Victoria Azarenka for the championship.

“My coach was trying to tell me, ‘Challenge the ball!’ and I was like, ‘I’m not going to challenge the ball,’” Brady said with a shrug. “You never know. It could have been a turning point or maybe I still would have lost the match.”

Osaka described the match as “super high quality throughout” and said, “It’s easily one of my most memorable matches.”

Brady agreed and said: “During the match I felt like, wow, this is a great match. It got to the point where I was feeling like I didn’t want it to end. I was just having so much fun.”

Saturday’s final will be only their second professional meeting, but they have known each other since they were youngsters competing in USTA-sanctioned tournaments in Florida, where they both grew up.

“I remember playing her, and I was like, wow, she hits the ball huge,” Brady said. “She’s going to be good.”

She wasn’t winning many matches, she said, which didn’t help.

“I thought, OK, maybe I’m not meant for this sport, maybe I’m not good enough,” Brady said. “I’ll go to college for four years and then I’ll find a real job.”

Brady spent two years at U.C.L.A., where she helped the tennis team to a national title as a freshman in 2014 and matured on and off the court. After bumping around on tennis’s minor-league circuit, Brady won her first WTA event last August in Lexington, Ky.

She celebrated by spending the end of 2020 in Germany, the homeland of her coach, Michael Geserer, training like she never has before.

“Once you become too comfortable, I think that’s when you’re in trouble,” said Brady, who got homesick but stuck it out, telling herself, “I have to do what I have to do to become the best tennis player right now and then afterward I can live my life.”

Osaka said her motivation to become the best tennis player she can be came from the people with whom she has surrounded herself.

“I just want to do really well as a vessel for everyone’s hard work,” she said, adding, “I used to weigh my entire existence on if I won or lost a tennis match. That’s just not how I feel anymore.”

Osaka gave voice to not being a nerveless machine and embarked on a winning streak that has reached 20 matches. Brady embraced the discomfort of being stuck in a hotel room for 24 hours a day for 14 days after people on her flight to Australia tested positive for the coronavirus and has never looked more comfortable on the court.

By managing the best they can under stressful circumstances, they have managed to be the last two women standing. Who these days can’t relate to that?