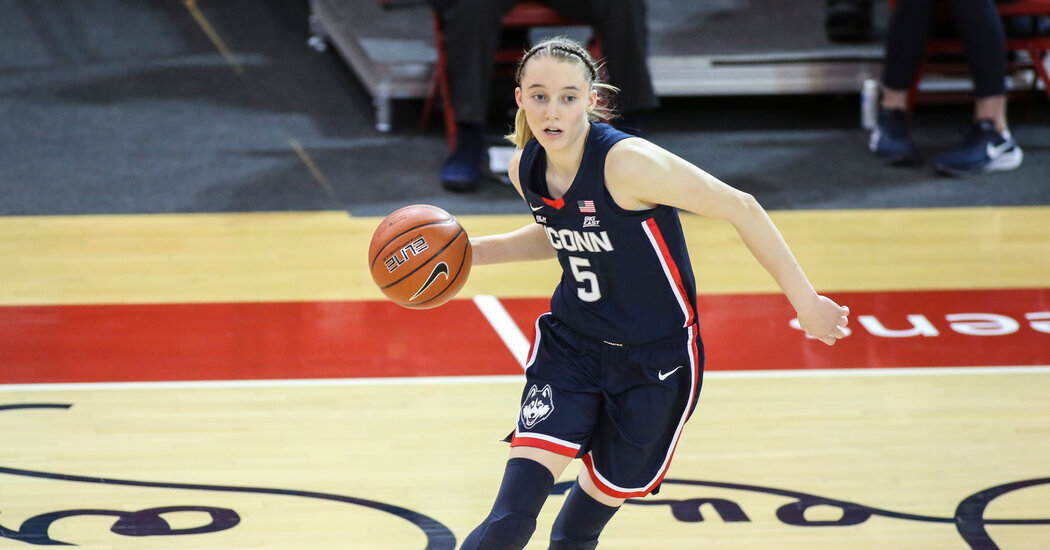 In a coronavirus-riddled season where student-athletes can do little else on campus besides play their sport, Bueckers, the University of Connecticut freshman, spends her rare free time outside of practice and games immersing herself in, rather than taking a break from, basketball.

“As soon as I get off the court I’m watching games as well,” Bueckers said in a phone interview. “I spend a lot of time just watching basketball.”

N.B.A., college and even the G League games captivate her. Pandemic or not, that’s how it’s always been for Bueckers (pronounced BECK-ers), the latest in a long line of highly regarded stars to lead the most successful women’s hoops program of our time.

While Bueckers devotes her downtime to watching others play, the rest of the basketball world is watching her. A five-star recruit from Minnetonka, Minn., who first received scholarship offers at 14 years old, Bueckers justified the hype over her college career in early February when she scored 30 points in three consecutive games, the first player in UConn’s history to do so. Capping those performances was a 31-point effort to beat then-top-ranked South Carolina in overtime. Bueckers scored the team’s final 13 points, the last of which came on an instantly viral 3-pointer she launched falling away that ricocheted skyward off the rim before dropping in to seal the victory.

“I was definitely impressed, especially not just at her age she’s doing all of this but how it’s just like a regular thing for her,” said Evina Westbrook, a redshirt junior guard for the Huskies. She added, “Every time the ball leaves her hands, we think it’s going in.”

Bueckers played all 45 minutes of that game, a sign of how heavily No. 1-ranked UConn (16-1) has come to depend on the 19-year-old guard to lead the Huskies in just about everything — minutes, scoring average, steals, 3-point percentage, assists. In its history, UConn has only relied as heavily on a handful of freshmen who became household names. In this pandemic-shortened season, Bueckers probably won’t touch hallowed volume records like Maya Moore’s freshman scoring record (678 points), but, shooting 55.4 percent on 3-pointers heading into the season’s final stretch, she could obliterate efficiency measures like Sue Bird’s single-season 3-point record of 49.7 percent set in 1999-2000.

“It’s been a long time since one player has had to carry a team as much as she’s had to in some of these games,” UConn Coach Geno Auriemma said after the South Carolina game.

Moore, Bird, Diana Taurasi and Breanna Stewart all joined UConn teams with more veteran leadership. Bueckers is leading a Huskies team with no seniors that plays six freshmen in significant roles. This young team is taking shape in a shortened season that was paused in December by the coronavirus pandemic, and where several notable programs opted out of playing. Still, it is UConn’s first season back in the Big East Conference, and many expect the program to return to its familiar standing — on top.

Through 18 games, Bueckers has looked capable of getting the Huskies there, a showing that has not shocked folks back in Minnetonka. She made the freshman/sophomore team at Hopkins High School as a seventh grader, and her unrelenting competitive streak stood out to Brian Cosgriff, the school’s varsity coach, even in that first year.

On her way to helping the team to an undefeated season in 2014-15, Bueckers would check into the junior varsity games — a level above — that followed if the Hopkins team happened to be trailing in the second half. Even then there was no such thing as too much basketball for Bueckers. “This is a seventh grader, playing against 10th and 11th graders,” Cosgriff said. “She was the best player in the state by the time she was in eighth grade.” The J.V. team went undefeated that year, too.

Cosgriff recalled that in Bueckers’s first varsity game as an eighth grader, she came off the bench and went 8-for-9 from 3-point range and “essentially won the game.” Hopkins went 31-1 that year. They lost four more games the next season, and then did not lose again for the rest of Bueckers’s high school career. All that winning and Bueckers’s buttery shooting both off the dribble and off screens made her a mesmerizing player to watch and a huge local star.

“Last year she was honored as a McDonald’s all-American at the Timberwolves game,” Cosgriff said. “People were coming up to her, she was on the big screen, she was more of a show than the Timberwolves, too.”

The former Minnesota Golden Gophers star Marisa Moseley was an assistant at UConn when Bueckers was starting to gain attention, and Cosgriff gave the coach a heads up to keep an eye on Bueckers during summer travel league play in 2017. Moseley and Auriemma took in one of Bueckers’s games and the Hall of Fame coach saw a familiar spark.

“I could go through a list of players when I watched them play in high school, I knew there was something different about them,” Auriemma said. “Then when they get to college they continue doing it. I don’t care if it’s a shot at the end, a play at the end of a shot clock, a loose ball, they get a crucial time. You see it. And you know who those players are, and you try really, really hard to get those players, and Paige is one of those players.”

Despite playing in empty arenas instead of in front of the wild crowds that normally attend UConn’s home games, Bueckers has garnered a spotlight that spans platforms and has earned comparisons to UConn greats and N.B.A. stars like Steph Curry, whom she faced off with in a shooting session at his camp in 2019. Her solution to dealing with that limelight has been predictably basketball focused.

She said she has regularly talked to Auriemma about pressure, even before the season started. “He told me that people are always going to have things to say, whether it be negative or positive,” Bueckers said. “You’re not going to be perfect in anyone’s eyes, they’re always going to find something to talk about. I lean on my teammates and my coaches because those are the people who really are the only opinions I care about.”

Those around her have already come to their own conclusion.