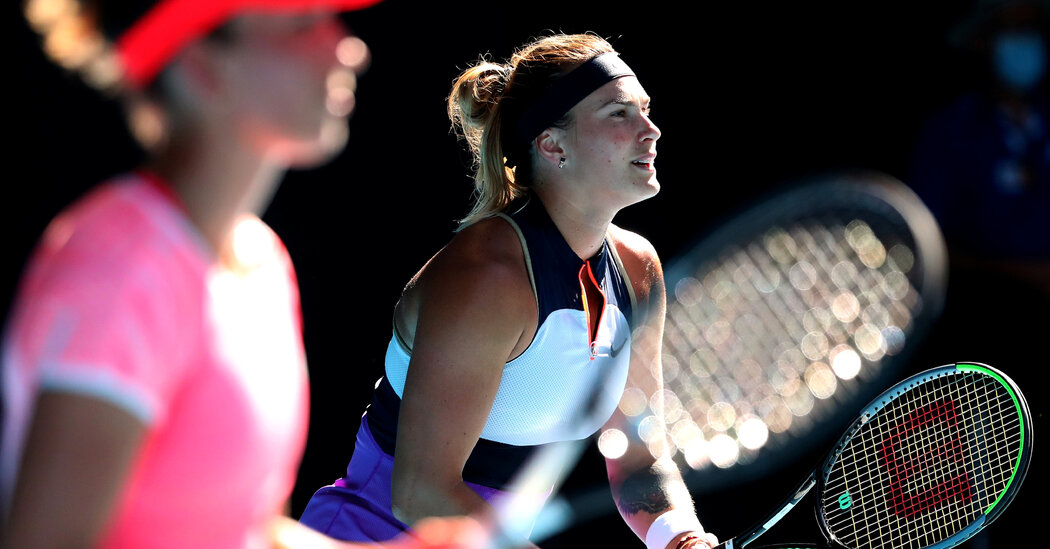 The win will move Sabalenka to the No. 1 ranking in doubles for the first time, with Mertens close behind at No. 2.

But after the title, the second Grand Slam triumph they have won together, Sabalenka said she would no longer play doubles and instead put her “whole focus on singles,” in which she is ranked seventh.

“I just want to manage my energy,” Sabalenka said. “When you go out for doubles, you’re still there for competing, to put everything you have. Sometimes it’s not really working well with me.”

Sabalenka is the only WTA or ATP player currently ranked in the Top 10 in both singles and doubles. She has been one of the most consistent players at WTA Tour events, where she has won nine singles titles. She reeled off 13 straight wins on tour across the end of last season and the beginning of this one.

But at Grand Slam events Sabalenka has fallen far short of her expectations. She has only reached even the fourth round in singles twice in 13 main draw appearances, including at this Australian Open, where she lost, 6-4, 2-6, 6-4, to Serena Williams.

“It was a great match against Serena — I’m not really happy with the end of the first and third set. I think I could do it better — but I think it was great experience,” Sabalenka said Friday. “It was a great lesson.

“I think I’m getting better on the Grand Slams side of the results,” she added. “I just want to keep it up. I just want to try to do something else to make sure I improve my singles.”

Mertens, who is ranked 16th in singles, voiced no objection to Sabalenka’s breaking up their dominant team.

“It’s her decision, I really respect that,” Mertens said. “Doubles takes some energy away, that’s true. On the other hand, for me, I just like to play matches.

“I mean, she can definitely try and we’ll see,” Mertens added. “If she still likes to play doubles, I’m here.”

Sabalenka said that not prioritizing doubles had been one of the keys to her success in the discipline.

“From my side, I would say I was pretty relaxed on doubles,” Sabalenka said. “I was doing whatever I want to. I didn’t care about winning or losing.”

“She didn’t care about me,” Mertens interjected with a laugh.

Sabalenka said that though she was more relaxed, being in a second competitive environment was still taxing.

“I know that doubles, it’s not that hard, you’re not moving that much,” she said. “It still takes a lot of energy. I just want to save it for singles. I just want to try something different this year and see what happens on the Grand Slams.”