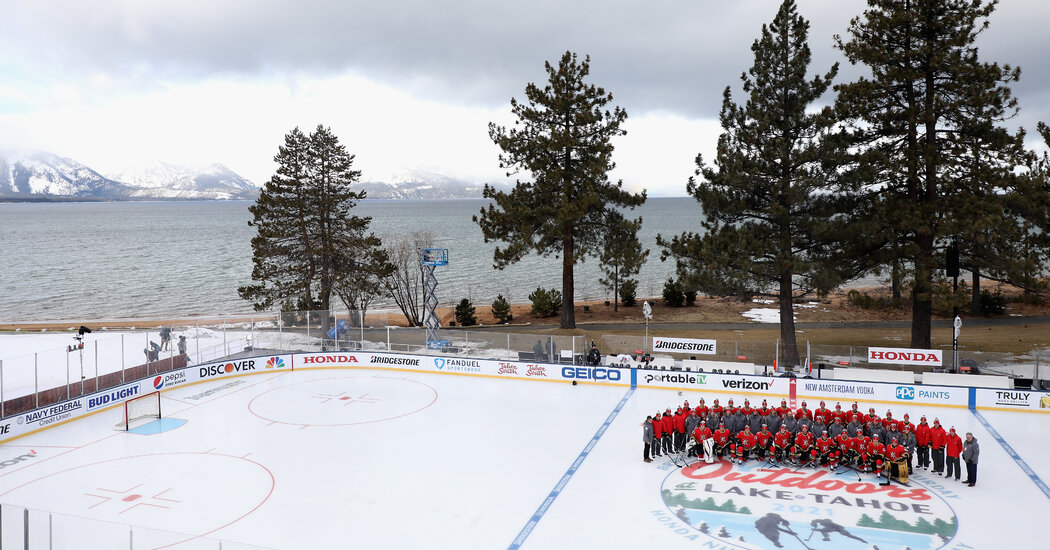 STATELINE, Nev. — The N.H.L.’s previous 30 outdoor games have been played across the United States and Canada in football and baseball stadiums, with pageantry fitting of Fenway Park and Wrigley Field, and the triumphant ticket revenue of the Cotton Bowl and the University of Michigan’s Big House.

But with the coronavirus pandemic keeping fans away, the league returned to an idea it has had for many years: a game where the scenery becomes the star.

On Saturday and Sunday at the Edgewood Tahoe Resort on the state line between Nevada and California, the N.H.L. will stage a pair of outdoor games on consecutive days on the same site for the first time. Also for the first time, the ice rink will be set against a backdrop of North America’s largest alpine lake, snow-capped mountains and an endless sprawl of pine trees, on the lakefront 18th fairway of a golf course.

“It’s one of the purest forms of the game that we could play, being outdoors,” said left wing Gabriel Landeskog, whose Colorado Avalanche will face the Vegas Golden Knights Saturday at 3 p.m. Eastern time. “Most of us grew up skating on lakes and outdoor rinks.”

“This is a drop-the-mic type of outdoor rink,” said Golden Knights Coach Peter DeBoer. “It’s the nicest I’ve ever seen.”

Even beyond the near-total absence of fans at games, the N.H.L. has not been spared the impact of the pandemic. It suspended play last March, then resumed in July with a reconfigured playoff format and all games held in two “bubbles” in Toronto and Edmonton, Alberta. The Stanley Cup was awarded on Sept. 28, and this season began in January, more than three months later than usual. Team valuations declined last season for the first time in 20 years, according to Forbes.

Events have been canceled, including this year’s All-Star Weekend and two outdoor events, the Winter Classic and Stadium Series, leaving the league in need of a signature moment.

The N.H.L. scouted sites such as Lake Louise in Banff National Park in the Canadian Rockies, and others in the United States, but ultimately settled on Tahoe, a site that met the criteria for both scenic beauty and logistical needs, topping a pandemic-permitted event with an alluring bow.

“With everything that’s going on, everyone’s trying to find the best way to stay sane and do the things that they love to do. Fortunately we are able to play hockey and do our jobs,” said left wing Brad Marchand, whose Boston Bruins play the Philadelphia Flyers Sunday at 2 p.m. Eastern time. “It does kind of tie it all together, being able to have these games played right now and also to be able to do it outside.”

The outdoor games were based on the romantic notion that nothing beats hockey played on a wintry day on the pond, said Steve Mayer, the N.H.L.’s chief content officer. While the games have been played in packed stadiums since they began in 2003, the pandemic has forced a return to the original spirit.

“Here, this is what it was like: no fans, in the great outdoors surrounded by mountains and water and the beautiful tree line,” Mayer said. “I do think once the puck is dropped the players will feel a little like they’re playing back when they were kids, for the love of the game.”

And without spectators in the stands, how the game will be seen on TV became the focus.

Bobby Sloan of Populous, a sports architecture firm that has designed venues for the Olympics, World Cup, Super Bowl and Major League Baseball, said the Tahoe game was a classic exercise in architecture, looking at the form of nature’s breathtaking serenity and the function of a regular-season hockey game. He likened the experience to a combination of set design and cinema direction, with the game’s presentation being exclusively for television.

Mayer, who headed the creation of the playoff bubbles, said that condensed timelines, a frantic pace, the made-for-TV presentation and an emphasis on player health and safety all carried over from the bubbles to the regular season and now to this outdoor event.

Planning an outdoor game usually takes about a year. This one came together in two months.

“We learned a lot in the bubble and in that environment that we’ve transferred to this environment,” Mayer said.

“There’s no blueprint to do this. You’re making it up sometimes as you go along,” he added.

Dan Craig and Derek King, the N.H.L.’s ice gurus, have to adapt when creating the rink.

From a command center inside their truck, they pump thousands of gallons of water and coolant to make the ice. The markings are made with a textile material rather than paint to better hold up to the elements. Also particular to this event is a thicker sheet of ice (approximately two inches), even relative to past outdoor games, which all used a sheet double the thickness of a standard indoor rink.

Sun, rain, wind and cold — too much or not enough — can make the ice conditions dangerous. Recent temperatures in Tahoe have been all over the weather map, from the high teens to the low 50s. Calls for bright sun on Sunday already pushed the start time up an hour.

“We’ve been looking ahead to the weekend and we’ll just deal with whatever Mother Nature gives us,” King said. “We have the ability to make changes on the truck, if we have to put less water down or maybe shave more ice.”

As for the final product in Tahoe?

“I am in awe,” Sloan said. “I turned to Steve the other day and stopped him and said, ‘Take time out and realize where we’re at,’” Sloan said. “From our first visit out here, just standing out, looking at the lake and the mountains behind it, it gets the hairs on the back of your neck standing up.”

Sloan said the inventiveness of the N.H.L. was inspiring him in projects for other sports, as pop-up venues become increasingly sought-after. He said plans for Major League Baseball’s game at Fort Bragg, N.C. in 2016, and its upcoming “Field of Dreams” game in Iowa were both shaped in some part by his experience with the N.H.L.

“It’s not just for the fans, it’s for the players,” Sloan said. “To see the smiles on their faces is always amazing.”

The concept of an outdoor regular-season game began as something of a novelty. Nearly five years passed between the first Heritage Classic in 2003 and the first Winter Classic in 2008. In 2014, coming out of a lockout-shortened year, the N.H.L. staged six outdoor games, including one at Dodger Stadium. In more recent years three or four outdoor games have been held each season.

They have mostly been a wild success for the N.H.L., both from a revenue standpoint and in growing fan interest in hockey in the United States. The 2011 Winter Classic at Heinz Field in Pittsburgh was the most-watched regular-season hockey game in 36 years.

Without spectators, the commercial success of this weekend’s matches remains to be seen. The pandemic will continue to cut into revenue for the foreseeable future. The N.H.L.’s U.S. television contract, a 10-year deal with NBC worth $2 billion, is set to expire at the end of the season, but Mayer offered a hope.

“Some of the most iconic places that could probably do this might not necessarily be in North America,” Mayer said. “I hope that we have such success that we are sitting there with that adult beverage going, ‘What’s next?’”