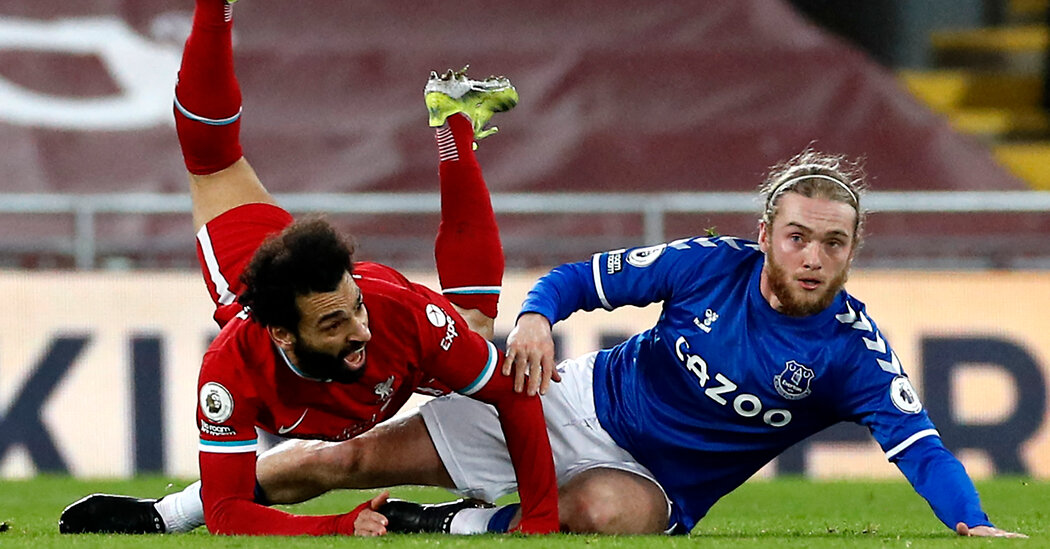 LIVERPOOL, England — It is every week, now, that Liverpool seems to lose another little piece of itself. An unbeaten home record that stretched back more than three years disappeared in January, spirited away by Burnley. The sense of Anfield as a fortress collapsed soon after, stormed in short order by Brighton and then by Manchester City.

The golden afterglow of the long-awaited Premier League crown that arrived last summer has been dimming for some time, but it darkened for good last week, with Jürgen p conceding the Premier League title while still in the bitter grip of winter.

And then, as fireworks boomed and car horns blared across Merseyside on Saturday evening, came what may be the most hurtful shift of all. Everton had not tasted victory at Anfield this century. It had not won a derby at all in more than a decade. For Liverpool, the impotence of its neighbor and rival had been a source of such unbridled glee that it had long since been fused into part of its self-identity.

But now, all of that, too, has gone. Richarlison put Everton ahead after just three minutes. Carlo Ancelotti’s team held Liverpool at arm’s length with a degree of comfort, ruffled only in flurries, for the rest of the evening.

The only hint that the Everton players knew they were close to making — or, perhaps, ending — history came in their celebrations when Gylfi Sigurdsson settled the game from the penalty spot with 10 minutes to play, completing the 2-0 score line. The reactions were raucous and definitive, the sound of a curse being lifted. On the touchline, Duncan Ferguson, part of the fabric of Everton for almost all of that 20-year spell, first as a player and now as a coach, bounced and roared.

Of course, Ancelotti and his players deserve praise and admiration for the precision and the poise of their performance, but the approach that brought them victory relies on a confluence of factors. First, of course, is that your team must be focused and disciplined and organized: not far from perfect, in fact.

Second, you must be, if not lucky, then at least not unlucky: even the most finely-laid plan can be undone by an unfortunate bounce of the ball, an arbitrary deflection, a moment of wonder.

And third, you need your opponent to be found wanting. A team full of confidence and energy and ideas will, most often, pick a way through even the most masterful defense. Liverpool lacked all of those things utterly and absolutely.

It is not desperately hard to work out why Liverpool has toiled so much this season. Klopp, certainly, does not believe there is any great mystery here. Liverpool has lost not only Virgil Van Dijk, but Joe Gomez and Joel Matip to injury, tearing the base out of its defense, of its team. Klopp has had little choice but to dismantle his midfield to patch up his defense.

But that is just the start. At times, it has seemed as if everything that could have gone wrong for Liverpool this season has gone wrong. It is easier to list the players who have not spent at least a few weeks in the treatment room: Andy Robertson, Georginio Wijnaldum, Roberto Firmino, Mohamed Salah, Sadio Mané.

Fabinho, the first midfielder drafted into defense, is currently absent with his own injury. Jordan Henderson, the second, limped off in the first half Saturday with a groin injury. Alisson Becker, widely regarded as the one of the world’s best goalkeepers and the one reassuring presence in Liverpool’s make-do-and-mend back-line, made three glaring errors in the defeats to Manchester City and Leicester.

If the root of the problem does not require forensic investigation, though, the response to it might. Klopp has, at times, appeared noticeably more irascible than usual this season, clashing with television reporters, snapping at journalists in news conferences, exchanging cross words with opposing managers.

When it emerged earlier this month that he had endured a personal tragedy — the death of his mother — it seemed as if that offered an explanation for the change in mood. Klopp, though, is adamant that he is able to compartmentalize his emotions; those who work with him say there has been no real change. Klopp has always been prickly. What has changed is the perception. Terseness from a position of strength is a flexing of the muscles. From a position of weakness, it looks a lot like a tantrum.

Indeed, it is striking that, even as what started as a dip has become a slump and now, on the back four consecutive home defeats — the club’s worst run since 1923 — has the look of a spiral, Liverpool has not sought change of any sort.

It was a telling statement. Klopp is the archetype of what might be called a system coach: He has a way of playing that is baked into his soul. His counterpart at Everton, Ancelotti, is the opposite: a manager who once coached Andrea Pirlo but who is perfectly content, in a different time, to instruct Michael Keane and Ben Godfrey to punt the ball long and hopeful, over and over again, hoping to catch the right current in the wind.

Such pragmatism is anathema to Klopp. Changing his style, so integral to his identity, would mean changing himself. That is the trait that has brought him such success, of course; it is possible, though, that it might also be what limits it in certain circumstances, that his loyalty to the system is damaging when external factors mean the system itself can no longer work.

Klopp has experienced a run like this — a period when it feels as though nothing goes right — once before, in his last year at Borussia Dortmund. Then, too, his squad was ravaged by injuries. He had, in the previous seasons, dealt with the departure of a raft of key players, too. He refused to compromise his beliefs. Dortmund finished seventh, and he stepped down.

The echoes of that year grow stronger with every passing week at Liverpool, with every new and unwanted record that falls. Liverpool keeps doing the same things, expecting different results, a team banging its head against a brick wall. It keeps losing all those little pieces of itself, lost in the shadow of an identity that cannot countenance change.