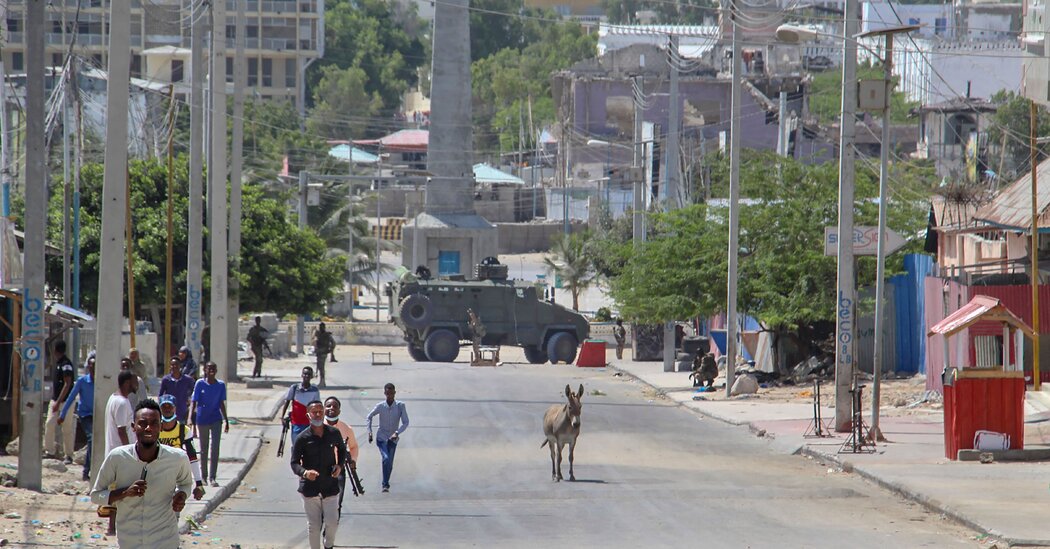 NAIROBI — Opposition protests in the Somali capital, Mogadishu, were interrupted by gunfire on Friday, heightening a political standoff caused by the government’s refusal to hold elections that were scheduled for two weeks ago.

Videos posted on social media and shared by local news outlets showed opposition leaders marching through the streets of the city before ducking and running for cover as gunfire is heard.

The unfolding chaos in the capital is a flash point in a deteriorating political situation in Somalia, and risks exacerbating clan-based grievances, emboldening the extremist group al-Shabab and undermining progress the country has made in recent years.

The current political crisis was set off when Somalia’s president, Mohamed Abdullahi Mohamed, delayed elections and then refused to leave office after his four-year term formally ended on Feb. 8.

The government put the country under a lockdown before the demonstrations on Friday, suspending all public gatherings. While it said it imposed the restrictions because of the coronavirus pandemic, opposition critics attributed the move to an effort to tamp down protests.

The United States Embassy in Somalia said that “as many as 20 people may have been killed or injured” in the morning clashes in the capital, and urged citizens to avoid the city. It also noted that incoming flights to the international airport were diverted and outbound flights canceled.

Hassan Ali Khaire, the former prime minister and a prominent opposition figure, said in a post on Facebook that he and several other presidential candidates, lawmakers, other officials and civilians survived an “assassination attempt” at the protest. Mr. Khaire later said in a news conference that shells fired against opposition protesters had landed inside the city’s international airport.

The chaos at the protests came just hours after an intense exchange of gunfire erupted in Mogadishu in the early hours of Friday morning. Hassan Hundubey Jimale, the Somali minister of internal security, said in a statement that “armed militias” had attacked military posts with the intention of taking over government buildings. Government forces repulsed the attackers, he said.

Those raids were followed by reports of attacks by the government on other political figures, including Mr. Mohamed’s two presidential predecessors, Hassan Sheikh Mohamud and Sharif Sheikh Ahmed, who said on Twitter that the hotel where they were staying had been targeted.

“The government forces tonight attacked the Ma’ida hotel where I and the former president were staying,” Mr. Mohamud wrote in a post on Twitter. “It is unfortunate that the outgoing president is shedding the blood of citizens who are preparing for a peaceful demonstration to express their views.”

Mr. Ahmed wrote that he believed the attack was ordered by Mr. Mohamed, who is “trying to suppress and force the Somali people from expressing their views peacefully.” The two men had been staying in the hotel along with other opposition figures before Friday’s rally.

The impasse over the election has inflamed tensions among the federal and regional governments and opposition parties. It has also alarmed the international community, with the United Nations, the United States, the European Union and several African countries, urging the parties involved to resolve the electoral issues “in order for credible and inclusive elections to proceed.”

In addition to intensifying attacks from the Qaeda-linked group Shabab, Somalia is battling two other crisises — rising cases of the coronavirus and desert locusts that are destroying crops and climate shocks, creating a humanitarian crisis affecting millions of people. Somalia also severed diplomatic relations with Kenya in December after accusing it of meddling in its internal affairs.

Murithi Mutiga, the Horn of Africa project director for the International Crisis Group, said that despite the unfolding events in the streets of Mogadishu, it was not too late for Mr. Mohamed to build consensus around the election and stave off another crisis in the region.

“At a time when Ethiopia is experiencing internal turmoil and its troops are facing off with Sudanese forces over a disputed borderland and with Al Shabab seemingly resurgent in Somalia and northern Kenya, renewed violence in Somalia and the possible fracturing of the security forces along clan lines would be significantly destabilizing,” Mr. Mutiga said.

Somalia’s prime minister, Mohamed Hussein Roble, said he was saddened by the events that transpired in the capital, noting that citizens had the constitutional right to demonstrate.

“Elections are going to take place,” he said in a video statement posted on Twitter. “I want to say to the people: Do not let the peace you have suffered for be destroyed.”