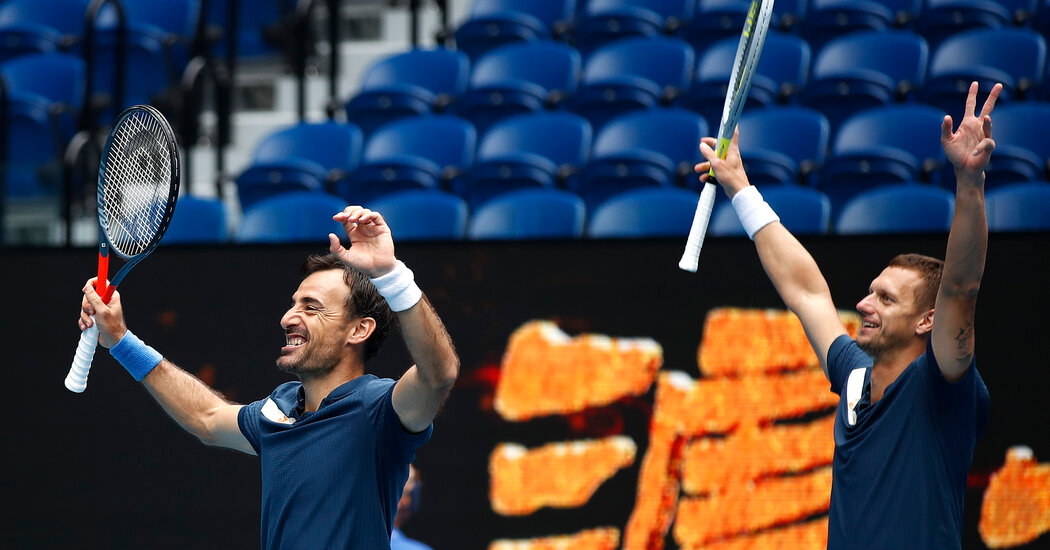 Playing in his first Grand Slam final 16 years after turning professional, Filip Polasek was ready for the moment, and nearly every ball that came his way.

Polasek and his partner, Ivan Dodig, dominated Joe Salisbury and Rajeev Ram, the defending champions, in the Australian Open men’s doubles final on Sunday afternoon, prevailing, 6-3, 6-4, in a match that felt nowhere near as competitive as the score suggested.

“That was way too good today,” Salisbury said on the court as he accepted his runner-up plate. “That’s got to be one of the best performances in a final, ever, so congratulations.”

Polasek dominated the match with his ability to return serves, hitting six clean return winners in the second set. His strong returning from the right side of the court helped to generate 15 break point opportunities for his pair; though they converted only two of them, they still had a comfortable victory over the Briton Salisbury and the American Ram, who did not earn any break point chances.

“Today I picked it up from the beginning,” Polasek said of his returning, adding that Dodig, 36, was normally the more reliable returner on the team, which was seeded ninth in the tournament. “I was just trying to keep going as long as possible.”

Polasek, a 35-year-old from Slovakia, has already been able to keep his career going well beyond what he had ever imagined, after having effectively retired from tennis at the end of the 2013 season because of a back injury that affected nerves connected to his left leg.

“I couldn’t really feel my left leg,” Polasek told the broadcaster Mike Cation in 2019. “I couldn’t jump, I couldn’t land on it, I couldn’t push my left leg. The leg was even bouncing when I finished matches. Then I decided to stop.”

When treatments failed to improve his condition, Polasek spent three years coaching youth tennis. He said he was not thinking of competing on the tour during that time, and he did not play a Grand Slam event between the 2013 United States Open and Wimbledon in 2019.

Polasek had been at peace with a career in which he had reached the top 20 and won 11 ATP titles in doubles, but the American tennis player Mike Bryan pulled him back onto the tour. Bryan, who is now retired, had found Polasek when he was looking for practice partners while in Slovakia with his Slovak girlfriend, Nadia Murgasova, who is now his wife.

Bryan encouraged Polasek to play again, and with his injury having subsided, he was able to resume his career in 2018.

“This is a kind of a second career; it has pretty much nothing to do with the first one,” Polasek said in 2019. “I am just using the experience I had from those six years at the top before.”

Success came quickly. Polasek reached the semifinals of Wimbledon in 2019 with Dodig as his partner, and then a month later they won the Cincinnati Masters for Polasek’s first career ATP Masters 1000 title.

Polasek smiled when told of Devvarman’s message, but said winning a Grand Slam title was “always a dream come true.”

“The first Wimbledon for me was really kind of the fairy tale,” Polasek said. “After we won the Cincinnati title, we kind of confirmed we really are in the group of the top doubles players. Since that I pretty much started believing we can really win a Slam. We did everything for it.”

Reaching his first Grand Slam final meant that Polasek missed the birth of his second daughter, Olivia-Victoria, on Friday.

Polasek said that after the Australian Open was pushed back by several weeks because of pandemic-related reasons, he and his fiancée, Karin, discussed whether it still made sense for him to make the trip.

Polasek laughed as he explained how she had held up her end of the bargain: His fiancée delivered their daughter soon after Polasek and Dodig had won their semifinal match against Mate Pavic and Nikola Mektic of Croatia.

“It’s quite sad,” Polasek said of missing the birth. “But to end it up this way here, it’s very nice.”

The Australian Open this year represents a growing shift toward men’s doubles being dominated by doubles specialists, who are mostly older than the players on the singles tour.

Fifty-seven of the 128 men who began in the first round of the men’s singles draw were also competing in doubles; by the time the men’s doubles draw reached the quarterfinal stage, only one of the remaining 16 players, Pierre-Hugues Herbert, was a crossover from singles.

For Dodig, who himself was a top-30 singles player earlier in his career, the growing strength of the doubles players was a point of pride.

“They have huge quality, they are unbelievable players, probably every one of them is a better player than doubles players,” Dodig said of the top singles players. “But that’s not the point — the point is they don’t play doubles. We know how to escape the good parts of their game. We don’t play how they want to play. That’s the key.”