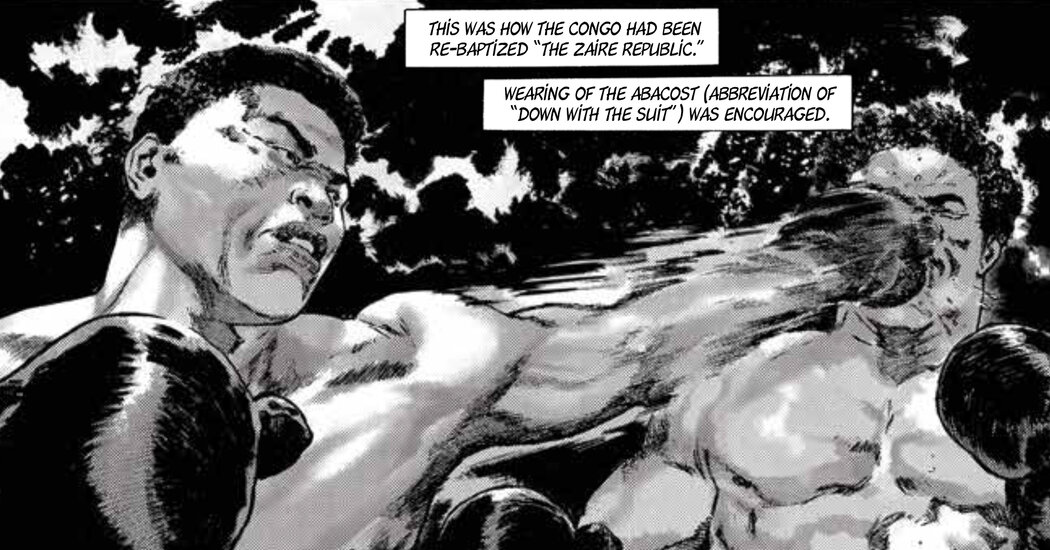 Muhammad Ali, muscled, poised and with a punch ready to be thrown, is captured in a rarely seen photograph taken by Abbas Attar at the Rumble in the Jungle, one of the boxer’s most famous matches, in 1974. In the next moment, illustrated by Rafael Ortiz, Ali delivers the blow to George Foreman, and the panel seems to reverberate from its force.

That powerful combination of photographs and comic book art is on display in a new graphic novel, “Muhammad Ali, Kinshasa 1974,” which retells the events of the legendary heavyweight title fight in Zaire, now the Democratic Republic of Congo.

The graphic novel, which is out on Tuesday, was written by Jean-David Morvan, who interviewed Abbas for his firsthand account and used the photographer’s archive of images to help tell the story. He also made Abbas, who died in 2018, the book’s narrator. A French edition of the graphic novel, which has colors by Hiroyuki Ooshima, was published last year.

Morvan is no stranger to this hybrid format. His graphic novels about the photojournalists Steve McCurry and Stanley Greene also combined comic book illustrations and photography. “I believe that photography and comics are very complementary because the comic is used to tell a long-form story and photography is an art of the instant, of the ‘here and now,’ of the fraction of a second,” he said in an email.

Just as any good comic book hero has a “secret origin,” the graphic novel shines a light on Ali’s past, recounting parts of his childhood and the lead-up to the fight against Foreman. Ali’s quest to regain his title included victories over Joe Frazier and Ken Norton. During the Foreman bout, the crowd could be heard chanting, “Ali, bomaye!” (“Ali, kill him!”)

Morvan set ground rules for the creative team in telling Ali’s story, including leaving the photographs untouched: “We always took the decision not to cut a photo, not to place a bubble on it, and not to redraw it,” Morvan said.

In the scene above, the local crowd embraces Ali. That was not true for Foreman, who is described as committing “error after error,” including arriving with Dago, his German shepherd, the breed “used by the Belgian colonists to suppress population insurrections.”

Ortiz, who drew the graphic novel, embraced an early suggestion by Morvan: “The idea that we never see Ali’s feet on the ground,” he said in an email, noting the boxer was known to float like a butterfly and sting like a bee, helped in conveying Ali’s movements in the ring. In one scene, he depicts Ali’s dizzying speed in a way reminiscent of the Flash.

Ortiz said he spent hours watching video of the event to help give readers the feeling they had a ringside seat at the fight. “I like to imagine myself as a film director with a camera in my hands, moving around the scene looking for the best angle, choosing the most important or representative frames,” he said.

Abbas, in his narration of the novel, recalled having to move quickly in the eighth round when Ali delivered a knockout punch.

“I’m very lucky,” he recalled. “Ali turns his head for a fraction of a second to look at his opponent on the ground,” and Abbas, who had switched to a camera made for color, got his shot. “I have my suspended moment.”