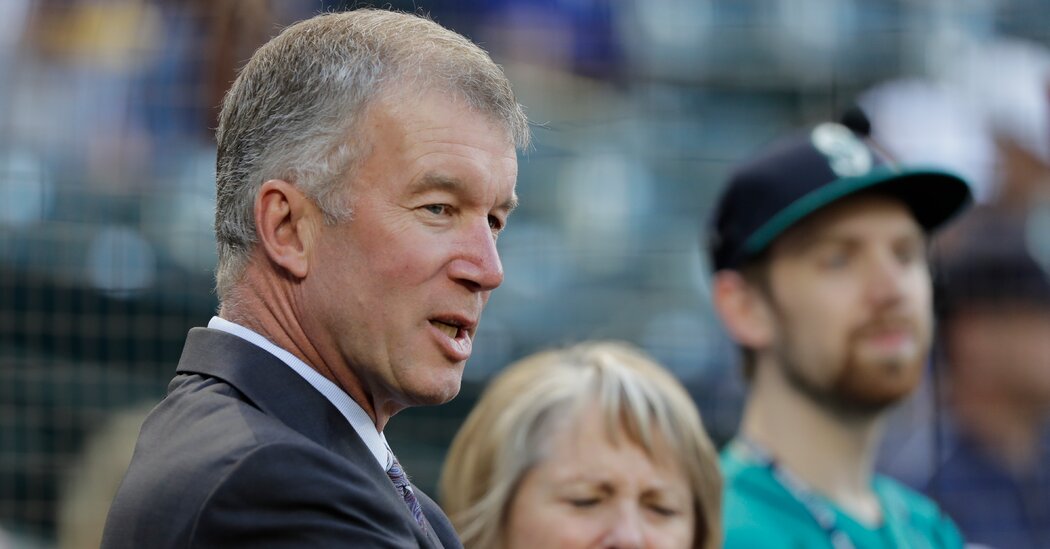 Until Monday, Kevin Mather was the president and chief executive of a Major League Baseball team with two dubious distinctions. His franchise, the Seattle Mariners, is woeful, both currently and historically. It is the only team to never reach the World Series and owns the longest active postseason drought in North American professional sports.

The Mariners have gone 19 seasons in a row without making the playoffs, and they plan to make it an even 20. We know this because Mather told the Bellevue Breakfast Rotary Club so this month in a startlingly frank conversation that has cost him his job.

Mather resigned on Monday, an inevitable step after he inflamed tensions with players by confirming some of the union’s major grievances with owners. Making the playoffs in 2021, Mather told the Rotary Club, was “probably a stretch” — yet the team would not be promoting its best minor-league prospects on opening day, essentially an admission that the team was manipulating their service time by keeping players in the minors longer than necessary.

Mather also hinted at the kind of groupthink among owners that has largely severed trust with the players’ union.

“The industry lost $2.9 billion,” he said, referring to the 2020 season played amid the pandemic, “and before any of you make faces: No, nobody cares that rich owners lost money. But we lost $2.9 billion last year, and we have taken the position that there are 180 free agents still out there on Feb. 5 unsigned, and sooner or later, these players are going to turn their hat over and come with hat in hand, looking for a contract.”

The union’s collective bargaining agreement with the owners expires after the 2021 season. Handed a weapon by management, the players’ union gleefully wielded it in a statement:

“The club’s video presentation is a highly disturbing yet critically important window into how players are genuinely viewed by management. Not just because of what was said, but also because it represents an unfiltered look into club thinking. It is offensive, and it is not surprising that fans and others around the game are offended as well. Players remain committed to confronting these issues at the bargaining table and elsewhere.”

Mather’s candor extended to individual players. While he offered many compliments, he said third baseman Kyle Seager was “probably overpaid” and would probably not be back next season; the left-handed starter Marco Gonzales was “very boring”; and the outfield prospect Julio Rodriguez, who is from the Dominican Republic, “is loud, his English is not tremendous.”

Mather also mocked the English skills of the former Mariners pitcher Hisashi Iwakuma, who is from Japan and now works for the team: “I’m tired of paying his interpreter. When he was a player, we’d pay Iwakuma X, but we’d also have to pay $75,000 a year to have an interpreter with him. His English suddenly got better; his English got better when we told him that.”

Rodriguez — who is 20 and speaks English well — responded on Twitter with a meme from “The Last Dance,” the Michael Jordan documentary. Rodriguez affixed his face to Jordan’s with the caption: “… and I took that personally.”

In a video conference with reporters, the Mariners’ chairman, John Stanton, offered no defense for Mather’s comments and said they did not reflect the beliefs of the organization. He said player moves were up to General Manager Jerry Dipoto, not Mather.

“The decisions concerning when players are called up are made by Jerry and the baseball team that he leads,” Stanton said. “Frankly, they were not decisions that are made by Kevin.”

While that is technically true, Mather’s elevated position obviously gave him strong influence on team policy. He revealed that the team had made a long-term contract offer to the outfield prospect Jarred Kelenic, and said that Kelenic was bothered when Baseball America ranked him as the majors’ fourth-best prospect, a spot behind Rodriguez.

“He thinks after six years, he’ll be such a star player that the seventh, eighth, ninth year options will be under value,” Mather said of Kelenic. “He might be right.”

Mather was more charitable in his views of first baseman Evan White, who did sign a long-term deal — over the union’s objection, Mather added — and was promoted for opening day last July. With Kelenic, meanwhile, Mather said the team wanted him to get at-bats in Class AAA “for a month,” which would effectively delay his service clock long enough to give the team an extra year of control before his free agency.

Likewise, Mather hailed the prospect Logan Gilbert as a “top-of-the-rotation pitcher,” but said “you won’t see him on April 1, but by mid-April.” And while the Mariners had several top prospects at their alternate training site last season, Mather said that he had a better chance of being called up to the majors than they did.

Players around the league like Anthony Rizzo, the veteran Chicago Cubs first baseman, were hardly surprised.

“Being in this game, you know what he said is true, about 99.9 percent, it happens — it’s just not out there and it’s not said,” Rizzo told reporters. “There’s stories written on it, but there are teams that manipulate service time. There’s teams that do it all the time. Him coming out and saying that, it’s pretty annoying and frustrating for us as players, but it’s not like we don’t know anything that he said. It’s just, him saying that — good, I’m happy it’s out in the public now and people are seeing that’s the way it is.”

Negotiations on a new C.B.A. will be a battle, Rizzo said, but that, too, is an open secret. As Mather also told the Rotary Club: “There is a high level of distrust between the union and the management currently, and I’m very worried about what’s coming in the future.”

As Palestinians Clamor for Vaccine, Their Leaders Divert Doses to Favored Few

In Iceland, 18,000 Earthquakes Over Days Signal Possible Eruption on the Horizon

Pfizer Vaccine Will Be Tested Against Variant from South Africa