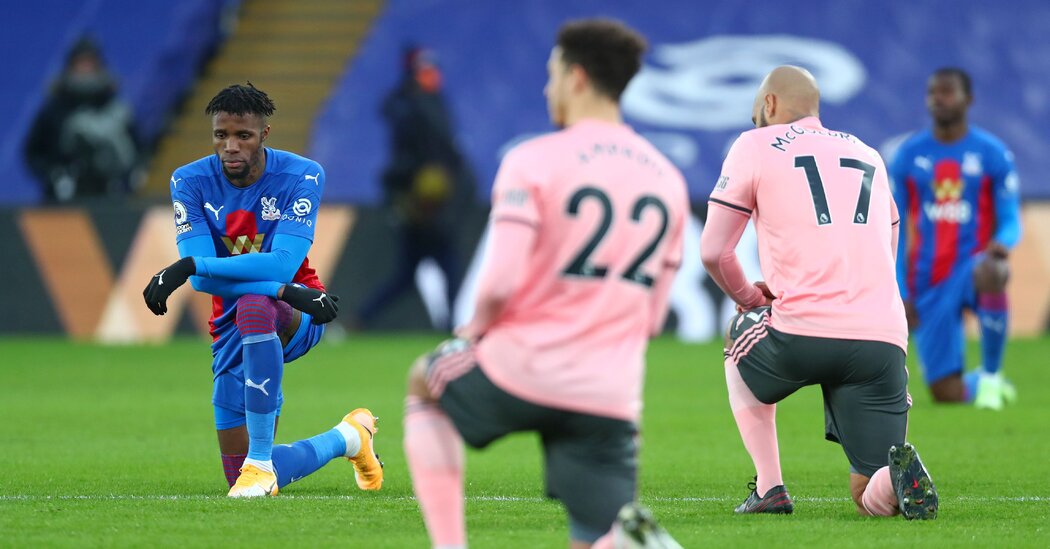 Tony Sanneh saw the pattern while he was a player. It is precisely the same one he sees now, more than a decade after his retirement.

Soccer confronts its struggle to combat racism only sporadically. The abuse of a player on the field, the denigration of a team from the stands, a sudden reminder of the lack of opportunities for Black coaches or executives — all of it sparks a conversation, a campaign, a vow to do better. “It is always talked about,” Sanneh said. “And then it goes away again.”

Several prominent Black voices within the sport have suggested, in recent weeks, that it must not be allowed to happen again. After almost a year of protests inspired by the Black Lives Matter demonstrations that swept the globe after the killing of George Floyd, a number of players, in particular, have suggested that gestures are no longer sufficient.

“It has become something we just do,” the Crystal Palace forward Wilfried Zaha said of players’ taking a knee before Premier League matches. “That is not enough for me.”

The players say they want actions, not gestures, and Sanneh — a veteran of the Bundesliga, Major League Soccer and the 2002 World Cup — and others are hoping to kick-start that effort. Sanneh has joined with Common Goal, a player-led social movement in global soccer; clubs from the three major leagues in North America; and the American Outlaws, the United States national team’s largest fan group, to launch the Anti-Racist Project, a program designed to tackle all aspects of soccer’s problem with racism.

The program’s scale is ambitious: It aims to engage some 5,000 coaches and 60,000 young people in more than 400 communities in its first year, using an educational antiracism tool kit established and honed by the work Sanneh’s personal foundation, based in St. Paul, Minn., has done over the last two decades. Sanneh said he hoped it could be “refreshed and globalized” to be rolled out beyond the United States next year.

Flickers of players’ impatience with the pace of change in the game are already starting to show. In England, where the sight of players taking a knee is now part of the pregame ritual, the Brentford striker Ivan Toney has suggested it has become “pretty pointless.” “Take the knee and the people at the top can rest for a while now,” he said.

The United States women’s team did not kneel during the national anthem before its game against Brazil on Sunday, a collective decision made by the team after nearly a year of protests. “It is all to say that we are now ready to move past the protesting phase and actually move into putting all of the talk into actual work,” the midfielder Crystal Dunn told reporters afterward.

Several players, including Manchester City’s American goalkeeper Zack Steffen, have backed the project, but its advantage, according to Evan Whitfield, a former Major League Soccer player who now works with Common Goal, is the breadth of its coalition.

“There is a rich history of player-led demonstrations,” he said. “That will continue, but what is unique about this is that sense of collective action.”

For a long time, Whitfield said, “corporate entities and clubs” have sought to use “their messaging to pacify player voices.” There is a sense that has changed now, not only because clubs are prepared to “back up what they espouse” through action, but also because there are those, like Sanneh and Steffen and others, who have sufficient clout to “put their thumb on the scale.”

The Chicago Fire of M.L.S., the Oakland Roots of the lower-tier U.S.L. and Angel City F.C., the National Women’s Soccer League expansion club that will join that league next year, all have lent support to the project.

“I cannot tell you how important it is that we step up before we take the field,” said Cobi Jones, the former United States international who is now one of Angel City F.C.’s owners. “It shows everyone that the club has an understanding of where it stands on racism, that we are at the forefront. It is inherent in what we stand for.”

The hope is that they will be just the first to take part. The project is, Whitfield said, “a call to action,” not just for other clubs, but “for leagues and fans, too.”

“We had to step up and work collectively,” Sanneh said. “To use our success to work for others in this industry. We have to all work together to combat societal challenges.”

Steffen was a little more succinct, echoing the views of a growing chorus of players. “We have talked a lot for the last few months,” he said. “Now is the time to take action, to get out there, and to show people that we are serious.”