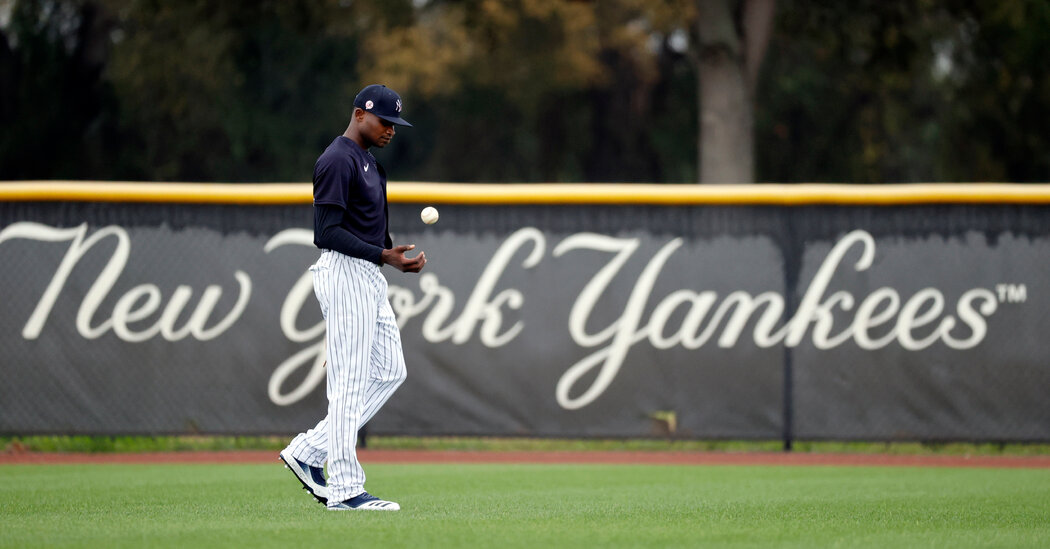 Domingo German sat down in front of a microphone and camera on Wednesday afternoon to address for the first time, albeit it virtually, the domestic abuse of his partner and his subsequent 81-game suspension that kept him out of the entire 2020 Major League Baseball season.

German, a 28-year-old pitcher, rejoined the Yankees last week when spring training began and was scheduled to speak to reporters on Sunday. But after one veteran player, the reliever Zack Britton, had strong words about the situation, Yankees Manager Aaron Boone admitted his antenna perked up more and German ultimately decided it was best he speak with teammates privately before addressing the public.

“I want to take this opportunity before answering your questions to sincerely apologize to the Steinbrenner family, my teammates, the front office and the people close to me who love me,” German said in Spanish on Wednesday, reading an opening statement. “I’ve made mistakes of which I’m not proud of, and that’s why I want to apologize.”

German then apologized for not helping his teammates during the 2019 playoffs, which he missed while under investigation by the league for his violent actions against his partner that September. He thanked Yankees General Manager Brian Cashman and Boone for being patient with and helping him, and he vowed to prove he belonged with the team. He also apologized for his cryptic messages on social media. (Last summer, he wrote that he was leaving baseball, and last week, he wrote that “everything was definitely over” along with the initials of his partner.)

He didn’t mention his partner, with whom he has at least once child, until the question and answer period of his news conference.

German was in the midst of a career season in 2019 when, after attending a charity gala in Manhattan hosted by his teammate C. C. Sabathia, he hurt his partner while intoxicated, according to the league’s investigation, the details of which were not revealed when German’s suspension was announced in January 2020.

German, who cooperated with the investigation, as did others, did not appeal the discipline. He missed the rest of the 2019 regular season and postseason, and all of the pandemic-shortened 2020 season.

While the police were not involved with the case, the league learned of the incident through a chain of people in and around the Yankees who had heard about it from German’s partner. (The league put her in touch with domestic violence experts.) Some within the Yankees clubhouse are aware of what happened that night; his partner contacted the wife of one of his teammates, and the couple came to their home the night of the incident to help.

So when Britton was asked last week how the team would receive German now that his suspension had ended, his brutal honesty pushed the Yankees and German to re-evaluate how they would handle his reintegration.

“I don’t think he owes anything to me,” Britton said. “I think it’s off-the-field stuff that he needs to take care of. Sometimes you don’t get to control who your teammates are, and that’s the situation. I don’t agree with what he did. I don’t think it has any place in the game or off the field at all.”

He added later, “My job is to go out there and pitch and do my job. So that’s kind of what my concern is right there. But he doesn’t owe me anything. That’s something that he’s going to have to deal with on his own and make better choices going forward.”

On Twitter later that day, Britton responded to a critique of his comments by writing, in part, “you think I don’t know the circumstances?”

Boone said he didn’t want to force German to address his teammates because he wanted it to be authentic. He admitted to not having taken the temperature of the clubhouse regarding German “as well as I should have.”

Yankees closer Aroldis Chapman, who was suspended for 30 games in 2016 for violating M.L.B.’s domestic violence policy, said he had a long conversation with German on Sunday and explained the value of addressing the situation. German did so on Tuesday, speaking to the Yankees in two groups because of league rules that limit the gathering of large groups during the coronavirus pandemic.

“He messed up in life,” Yankees first baseman Luke Voit said following German’s public apology on Wednesday. “I don’t condone any of the things he did. He’s getting a second chance at this. We have his back but he’s skating on thin ice and he needs to get his life together. I think he’s doing the right steps to do so, but again, he’s got to prove to us he can do that.”

Last fall, Hal Steinbrenner, the team’s managing general partner, said in a radio interview for German to return he needed to feel comfortable with German being both sorry for his actions and that he had turned his life around. German said he hadn’t spoken with Steinbrenner, but Cashman and Boone have twice had long conversations with him.

“He has done enough to earn the opportunity to be here and to compete and to be a part of this team,” Boone said. “Now the proof is in the daily life that he leads.”

German, who at one point during his news conference mentioned his partner by name, said he remains with her. He said the counseling mandated by M.L.B. as part of its treatment program has helped him improve his relationship with her.

Asked what he had done to make sure his partner felt safe, he said, “We have had a lot of conversations about how this won’t happen again. We’re going to have better communication at home.”

German said he remained on good terms with Britton and appreciated the advice he has received from him. He said he wants to talk to younger players about how to avoid the pitfalls of his life. Over the past year and a half away from the Yankees, he said he has learned to think before he acts, to avoid bad habits and to seek help should he feel trouble arising.

As far as fans or teammates who may never see him the same way again or who feel uncomfortable cheering for him, German said, “I’m willing to change, to be a different person and I’ll show that with my actions and my deeds.”