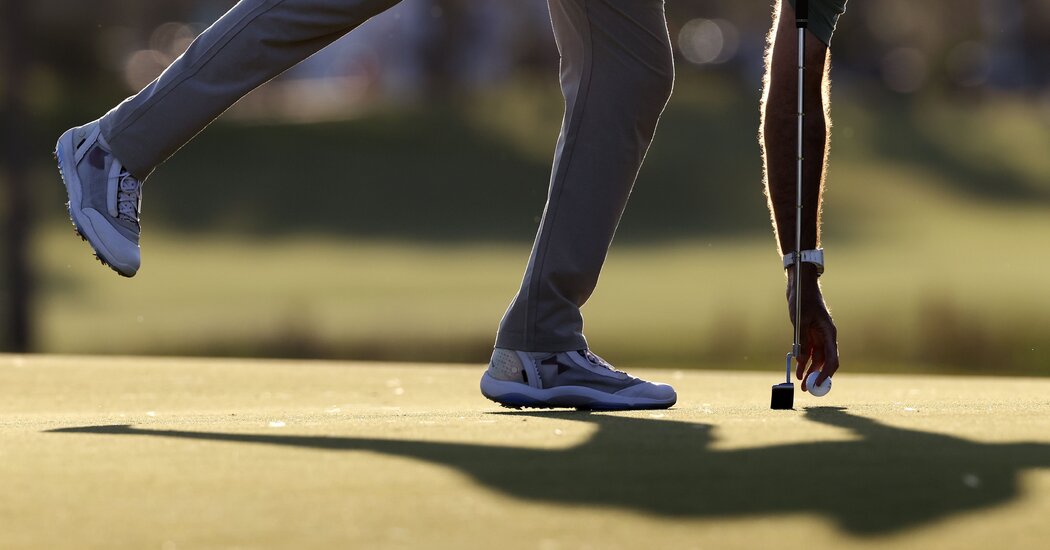 BRADENTON, Fla. — Tiger Woods was never expected to play in the first round of the PGA Tour event held Thursday in Central Florida. It did not matter. His presence, his influence, the impact of his life and career was evident throughout the grounds.

If this is at least the beginning of the end of the Woods era in golf, in the wake of his serious car crash Tuesday, the setting at the Concession Golf Club, where the tournament is being held, revealed much about what he has meant to the sport and the almost incalculable change he has wrought.

It was nearly impossible to look in any direction and not see Woods’s imprint.

On the serpentine drive into the golf course, multiple, extra-wide trailers labeled “Player Performance Center” lined the road. They are mobile fitness facilities chock-full of treadmills and advanced exercise equipment.

It would now be unthinkable to host a PGA Tour event without them, and the trailers log about 25,000 miles annually to keep up with the 100-plus pro golfers whose exacting workouts are now a sacrosanct part of their tournament regimens.

Roughly 25 years ago, more PGA Tour players probably smoked than worked out during an event. What changed?

Tiger Woods turned pro in 1996, won the Masters a year later and two months after that made the fastest ascent to No. 1 in the world golf rankings. Moreover, he was a workout freak, had started beefing up and his prodigious drives would soon spawn the redesign of top golf courses around the world.

Golfers back then were a hodgepodge of shapes, some with bellies that bulged over gaudy white belts. It was an image that perpetuated the notion that golf was not a sport. There is a different look on the tour these days, and a short walk from the fitness trailers to the practice range would prove it.

From behind the range, one could assess the form and movements of several dozen top golfers whose ages ranged from about 20 to 40. Nearly all had trim, athletic builds — and flat stomachs. They swung ferociously hard, yet never seemed out of balance, a compliment to their conditioning and developed strength and flexibility. Most had learned and honed that mix of pliancy and power from watching a single uber-dedicated golfer, their idol, Tiger Woods. Even the swing coaches who stood by the golfers had studied and memorized every Woods move before he had turned 30 years old. In other words, by the time he had won his 10th major championship.

Just beyond the range was the first tee, and the path leading to it was awash in the emblems of corporate sponsors. Professional golf had always been supported by commercial interests but that relationship blossomed exponentially as Woods came up on the scene with a memorable Nike television advertisement when he stared into the camera and said: “Hello, world.”

Thursday, there was a scoreboard near the first tee encircled by not one, but seven logos from tournament sponsors. The prize money for the one-week event is $10.5 million, or around five times what PGA Tour tournaments paid before Woods turned pro.

This week’s event is a World Golf Championship event, a collaborative effort to periodically bring together the best players from tours in North America, Europe, Asia and Australia. There were no world championships until 1999, by which time Woods, whose multicultural background had helped golf explode internationally, had won two majors and 13 PGA Tour events (and, of course, he won two of the three inaugural World Golf Championships in 1999).

As play began in the first round, long putts dropped and players celebrated with uppercut, clenched fist pumps. There was no reason to ask where they learned such a signature move. They wore eye-catching colors made by top designers who earned most of their revenue outside golf and their garb was embossed with the logos of sponsors whose customers might not even be golfers: luxury car manufactures, credit card companies, premium watch makers. Woods pioneered such crossover appeal.

It did not matter where one walked. Woods was here.

Wednesday, Rory McIlroy, a four-time major winner who grew up idolizing Woods and now considers him a close friend, was asked if the players in this week’s field had considered some kind of tribute to Woods. McIlroy shook his head back and forth.

“He’s not gone,” McIlroy said. “I feel like we should pay tribute to him every day for being on the PGA Tour and what he’s done for golf.”