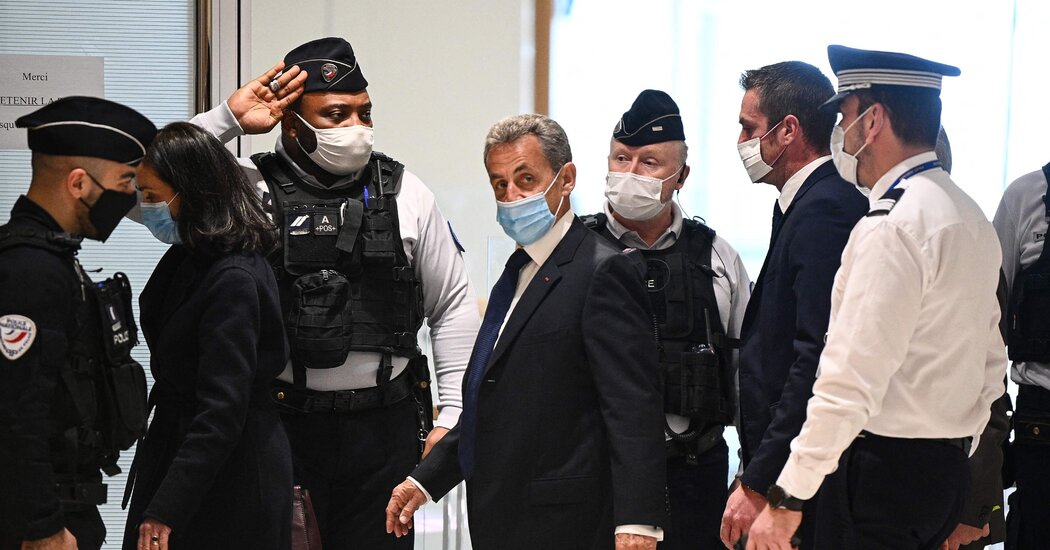 PARIS — The former French president Nicolas Sarkozy was found guilty and sentenced to prison by a court in Paris on Monday on charges of corruption and influence peddling, only the second time in modern French history that a former president has been convicted of a crime.

The conviction was the culmination of just one of several long-running legal entanglements that are coming to a head for the politician who led France from 2007 to 2012. Mr. Sarkozy, 66, has always denied any wrongdoing and he quickly announced he would appeal.

He still holds considerable sway among French conservatives, but the conviction could undermine his broader standing in French politics and dash any hopes of mounting yet another comeback ahead of the 2022 presidential elections — especially for a politician who has fashioned himself as particularly tough on crime.

Mr. Sarkozy was found guilty of trying to illegally obtain information on another case against him from a judge in return for promises to use his influence to secure a prestigious job for the judge.

Jean-François Bohnert, the head of the financial prosecutor’s office — which handled the case against Mr. Sarkozy — noted in a statement that the judges had found his actions “particularly serious, having been committed by a former president of the Republic who was once the guarantor of an independent judiciary.”

Jacqueline Laffont, Mr. Sarkozy’s lawyer, told reporters that he would appeal the conviction, calling the ruling “totally baseless and unjustified.”

While the court handed down a three-year prison sentence, two of those years were suspended. If Mr. Sarkozy commits a new crime within a given time frame, a court could then order the full sentence to be served.

Mr. Sarkozy can request that his one-year term be served outside prison, for instance at home with an electronic bracelet. But Mr. Sarkozy’s appeal places the entire sentence on hold. The conviction does not bar Mr. Sarkozy from running for office, although he has not publicly expressed any such desire.

“It’s a hard blow,” said Pascal Perrineau, a political science professor at the Sciences Po university in Paris, noting that despite his legal worries since leaving office, Mr. Sarkozy had cultivated the image of an “irreplaceable” kingmaker who acted behind the scenes on the French right, aided in part by the lack of a clear political successor.

“He filled the void and appeared as a moral authority, and a possible option for 2022,” Mr. Perrineau said. “His conviction, if confirmed, robs him of this stature.”

Until Monday, only one president in recent French history had been found guilty by a court of law: Jacques Chirac, who was convicted in 2011 of embezzling and misusing public funds when he was mayor of Paris. Mr. Chirac was the first French head of state to stand trial since Marshal Philippe Pétain was found guilty of treason at the end of World War II for collaborating with Nazi Germany.

The list of French politicians — not just presidents — who have been convicted of financial or legal impropriety is much longer, however, including François Fillon, Mr. Sarkozy’s former prime minister; Christine Lagarde, Mr. Sarkozy’s former economy minister; and Jérôme Cahuzac, who was budget minister under a Socialist government.

The string of cases has fed growing frustration with France’s political elite.

“Symbolically, it is very important,” Mr. Perrineau said of Mr. Sarkozy’s conviction. “It heightens the mistrust, the impression that they are all corrupt.”

Mr. Sarkozy, who lost his bid for re-election in 2012 and mounted a failed comeback attempt in 2016, has denied any wrongdoing in the web of cases that has plagued him since he left office.

The verdict came amid a heated political climate in France as the country gears up for the 2022 presidential election.

Mr. Sarkozy is on good terms with President Emmanuel Macron, who has recently steered France to the right, and he still wields considerable influence on the main conservative political party in France, Les Républicains.

With the presidential election fast approaching and no clear front-runners in sight, Mr. Sarkozy’s blessing is widely sought by party officials, many of whom have accused prosecutors and judges of unfairly targeting Mr. Sarkozy.

“The severity of the sentence is absolutely disproportionate,” he wrote on Twitter.

Gérald Darmanin, a former protégé of Mr. Sarkozy who is now Mr. Macron’s tough-talking interior minister, extended his “friendly support” to the former president after his conviction.

The case on Monday, known as the “wiretapping affair,” was the first against the former president to finally reach trial, as Mr. Sarkozy — a lawyer by training — used every legal recourse available to him to draw out proceedings.

Although the cases are separate, the wiretapping affair emerged from the Libya inquiry, which began in 2013 and led investigators to place wiretaps on phones belonging to Mr. Sarkozy and Thierry Herzog, his lawyer.

Through the wiretaps, prosecutors claimed in court, investigators discovered in 2014 that Mr. Sarkozy and Mr. Herzog were using secret phone lines and that the two had discussed ways of obtaining confidential information about another case involving the former president that was being handled by France’s top appeals court.

Prosecutors said Mr. Sarkozy sought to illegally obtain information from Gilbert Azibert, then a magistrate at the court, including by promising to use his influence to secure a job for him in Monaco.

The job never materialized, but under French law, prosecutors do not have to prove that a corrupt deal was carried out to secure a conviction — only that one was agreed upon. At the trial, held in November and December, prosecutors accused Mr. Sarkozy of entering a “corruption pact” with Mr. Azibert, a charge he strenuously denied.