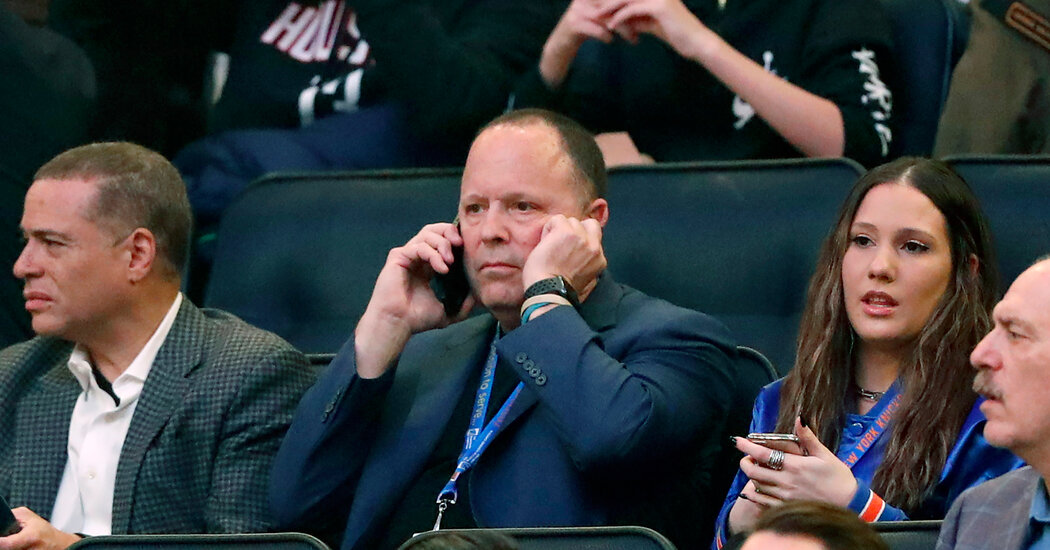 The Knicks had just sullied their better than expected start with a loss at home to the Miami Heat, but the more pressing topic on Feb. 7 was a looming trade. A deal with the Detroit Pistons was about to position the Knicks’ Tom Thibodeau to coach Derrick Rose for the third time.

The trade, though, was not yet official, so Thibodeau was not yet ready to discuss the player’s arrival with reporters — not even after their happy stints together in Chicago and Minnesota.

“In terms of the roster, that’s a Leon question,” Thibodeau said, referring interest in the topic to Leon Rose, the Knicks’ team president.

It was quite the deflection from the defense-loving coach.

Leon Rose, you see, makes himself available to field media queries about as scarcely as any N.B.A. executive running a front office ever has. Tuesday will be one full year on the job for Rose, who didn’t even hold an introductory news conference. Apart from a brief interview with the team’s play-by-play man, Mike Breen, on the MSG Network in June 2020, Rose has only once spoken to reporters, during the team’s Zoom session in July 2020 to formally announce Thibodeau’s hiring.

A public sense of Rose’s vision for how to build a team, how he plans to lead the Knicks back to sustained prominence for the first time since the 1990s, thus remains murky.

Our request for Rose to break from that policy for this article was predictably declined by a team spokesman — even as the Rose regime, presiding over one of the league’s first-half surprise teams, has some good things to trumpet. Few predicted that these Knicks would contend for a postseason berth, but the present is going well enough that Rose has faced scant pressure to expound on the moves he has made or on his future plans.

“I see orange-and-blue skies again,” the filmmaker Spike Lee, who is known as one of the Knicks’ biggest fans, said in a telephone interview. “I’m very, very encouraged.”

Perhaps this is one time he should be. On March 2, 2020, Rose attended his first game in his new role, but the Knicks’ victory over Houston — in their 61st of 66 games in a coronavirus-interrupted season — was overshadowed by a messy dispute between the team’s owner, James L. Dolan, and Lee over the entrance that he used at Madison Square Garden. This March: Julius Randle’s breakout season earned him a spot in next Sunday’s All-Star Game; Thibodeau’s schemes and throaty exhortations have steered the Knicks to the league’s third-ranked defense; and tangible positivity is bubbling about the possibility of the team securing just its fifth playoff berth during Dolan’s 20 seasons in charge.

It also helps that after seven consecutive nonplayoff seasons, Rose has presided over more hits than misses so far. That starts with the hiring of Thibodeau, whose demanding style has clicked more seamlessly than anticipated with an inexperienced roster. The Knicks entered Sunday’s game at Detroit at 17-17, which was good enough not only for a share of fourth place in the Eastern Conference, but also to shift focus away from Dolan, last season’s dreadful headlines about his clashing with Lee and the much-panned hiring of Steve Stoute as a branding consultant.

“Knick fans, we’re optimistic,” Lee said. “We see hope. We haven’t seen that in a while.”

Within the N.B.A., most observers say it would be unfair to grade Rose on one year of work even if the Knicks (with 13 of their 17 wins against sub-.500 teams) weren’t capitalizing on the East’s famously forgiving nature. Rose’s detractors, or skeptics of his ability to succeed in the transition from player agent at Creative Artists Agency to team builder with no front-office experience, surely see he deserves more time to shape the roster.

An urge to say that the Knicks erred in November by drafting Obi Toppin at No. 8 over all rather than taking the electric guard Tyrese Haliburton, who went at No. 12 to Sacramento, is tempered by the possibility that Rose may also have unearthed a true sleeper by acquiring the rights to the No. 25 overall pick, Immanuel Quickley, who (sorry, can’t resist) quickly established himself as a fan favorite. The Knicks made a hard push in free agency to sign Gordon Hayward — at Thibodeau’s urging — but won plaudits when they did not overreact after Hayward chose Charlotte. Rose maintained the financial flexibility to be a player in free agency this summer instead.

Although that free-agent class will not be as inviting as once thought, after several stars signed contract extensions before this season, hopeful vibes are unexpectedly circulating ahead of schedule. Thibodeau’s New York team is bunched record-wise with established teams like Toronto, Miami and Boston, despite up-and-down play from RJ Barrett, the Knicks’ top draft choice in 2019, and a broken hand sustained by the athletic center Mitchell Robinson.

The trade for Derrick Rose initially inspired fears that Quickley’s development could suffer, on top of Toppin’s slow start and the apparent gaffes of previous regimes, which burned top-10 picks on Kevin Knox (two spots ahead of Oklahoma City’s Shai Gilgeous-Alexander) and Frank Ntilikina (five spots ahead of Utah’s Donovan Mitchell and six ahead of Miami’s Bam Adebayo). Yet Derrick Rose, in his second stint as a Knick, has settled well to strengthen a roster that lacks playmaking and perimeter shooting. Some of the snickering that would typically greet Thibodeau’s reunion with Rose, his former first option in Chicago, has been drowned out by what Thibodeau is coaxing out of a group that finished 23rd in defensive efficiency last season.

Yet one suspects that the sunny outlook, even among the Knicks’ long-term loyalists, is fleeting — especially with the Nets seemingly collecting superstars for sport across New York’s East River.

Rose, who The New York Times reported in November earns an estimated $8 million annually, and his top aide, William Wesley, who is known as Worldwide Wes, will ultimately be judged on how swiftly they can deliver at least one player in the talent ZIP code of the Nets’ Kevin Durant, James Harden and Kyrie Irving. If the Nets play to their potential and emerge as true title contenders, sticking to Rose’s current methodical approach, sensible as it sounds, will take discipline the Knicks aren’t exactly known for.

The media strategy, in the interim, appears to be letting the on-court flickers of progress (and Thibodeau) do the talking. Rose and Wesley are accustomed to operating this way after maintaining very low profiles during their C.A.A. days, but it actually takes the franchise back in some ways to pre-Dolan times. Pat Riley and then Jeff Van Gundy were the frontmen as coaches, largely because of the star center Patrick Ewing’s aversion to the spotlight.

When Toppin became the first draft pick of this new era, Rose limited the sharing of his thought process behind the selection to a written statement that said little more than “Obi was someone we really coveted.” When the Knicks were criticized for their apparent infatuation with players represented by C.A.A. or Kentucky alumni who had played for John Calipari, who is close to both Rose and Wesley, it was left to Thibodeau to insist that it’s “more coincidental” than the news media suggests.

In a letter to season-ticket holders a year ago, Rose wrote: “Nothing about this is easy, or quick, so I ask for your continued patience. What I promise you in return is that I will be honest and forthright.” The reality, of course, is that forthrightness has never been a hallmark of Dolan’s ownership, but who is going to complain apart from sportswriters when the Knicks are playing like plucky overachievers?

If this is really the start of something — if Rose has staying power after all the false dawns that have felled supposed saviors on the court (Amare Stoudemire, Carmelo Anthony and Kristaps Porzingis) and off (Donnie Walsh, Mike D’Antoni and Phil Jackson) — only the scribes are bound to remember Rose’s letter from when he got to Gotham.

Lee insisted, furthermore, that the fans understand why they are so rarely briefed.

“You know where that’s coming from,” Lee said. “That’s an edict from up top. I’m not happy about it, but there’s someone else calling those shots. We’re used to it by now. And he’s not selling the team, so what are we going to do?”