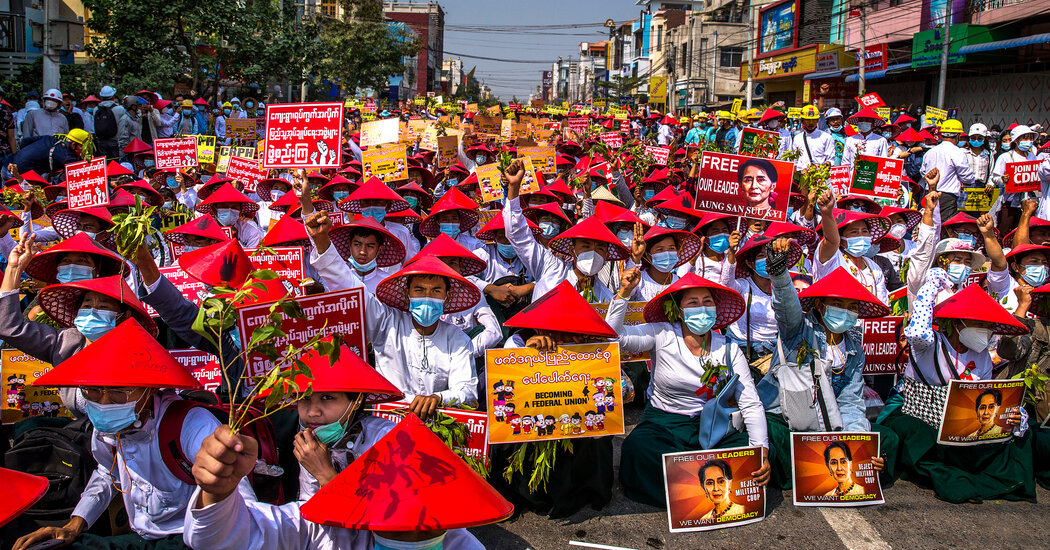 Her death came without warning. The single mother, Ma Daisy Kyaw Win, went to buy snacks for her 6-year-old son in Mandalay, Myanmar’s second-largest city, and stopped to watch anti-military protesters fleeing from the police.

As she stood there, a bullet struck her in the head, and she dropped dead on the spot. Ms. Daisy Kyaw Win, a 32-year-old hotel cleaner, was buried on Monday, a day after her death, in keeping with Muslim tradition.

She was one of at least 19 people shot and killed by the security forces on Sunday in the military regime’s harshest crackdown on pro-democracy protests since it seized control of the country in a Feb. 1 coup.

“She was just a bystander when she was shot,” said her sister, Ma Kay Thi Kyaw Win. “Our country has become lawless since the coup because of the military and the police.”

A civil disobedience movement that has included work stoppages and daily demonstrations throughout the country is now entering its second month, challenging the legitimacy of the military rulers and their grip on power.

The security forces have responded by arresting more than 1,100 people since the coup, according to the Assistance Association for Political Prisoners. Among them are the country’s top two civilian leaders, Daw Aung San Suu Kyi, the ousted state counselor, and U Win Myint, the deposed president.

Both face seemingly minor criminal charges that could land them in prison for years. During a court hearing on Monday, prosecutors piled on new charges against them.

Ms. Aung San Suu Kyi, who was previously charged with violating import restrictions by possessing walkie-talkies found at her home, was charged with violating the telecommunications act by using them. Her defense says the walkie-talkies belonged to security staff members assigned to protect her. These staff members were assigned by the Ministry of Home Affairs, one of the three ministries that were controlled by the Army commander in chief with no civilian oversight.

Ms. Aung San Suu Kyi was also charged Monday with violating a law against making a statement that could alarm the public and induce someone to act against the state. As evidence, prosecutors cited statements made since the coup by an organization of members of Parliament, including many from her party, who have not been arrested and are seeking international recognition as the legitimate leaders of Myanmar.

During Ms. Aung San Suu Kyi’s five years as the country’s de facto civilian leader, human rights activists repeatedly called for her government to repeal that law, which was used to punish its critics. Her government refused to take it off the books.

Mr. Win Myint was charged Monday with violating the same law. Both were charged last month with violating pandemic restrictions by interacting with the public.

Ms. Aung San Suu Kyi, who served 15 years under house arrest during a previous era of military rule, now faces a total of up to nine years in prison; Mr. Win Myint faces up to five years.

This was their second trial appearance behind closed doors. Criminal trials convene only once every two weeks in Myanmar, and often for short sessions, which means that the proceedings could drag on for many months.

The judge hearing their cases has refused to let them be represented in court by an attorney. U Khin Maung Zaw, a lawyer for Ms. Aung San Suu Kyi, said he tried to attend the hearing but was blocked from entering.

“We listened to it from 10 feet away,” he said in an interview. “I could hear Daw Aung San Suu Kyi’s voice. From the sound of her voice, she seems to be healthy. I heard her asking to meet with her lawyers.”

The anti-junta protests have been going on continually for the past month. By day, people march by the thousands through city streets, undeterred by a ban on public gatherings of more than four people, and by night they bang in defiance on pots and pans.

The security forces continued to crack down on protesters on Monday, but on a lesser scale than the day before. Attacks on protesters were reported in Yangon, Myanmar’s largest city, where thousands of demonstrators gathered in several locations, and in Lashio, a town in northern Shan State.

In Yangon, security forces arrived at one protest site in several trucks, jumped out and began firing their weapons, according to a video of the scene. But it was unclear whether they were firing rubber bullets or live ammunition, and there were no apparent casualties.

For the relatives of Ms. Daisy Kyaw Win, her death was not a political statement but a personal tragedy.

“It’s heartbreaking to see my nephew asking when his mother will come and sleep with him again,” she said. “We must win this revolution not to have more motherless kids in our country.”