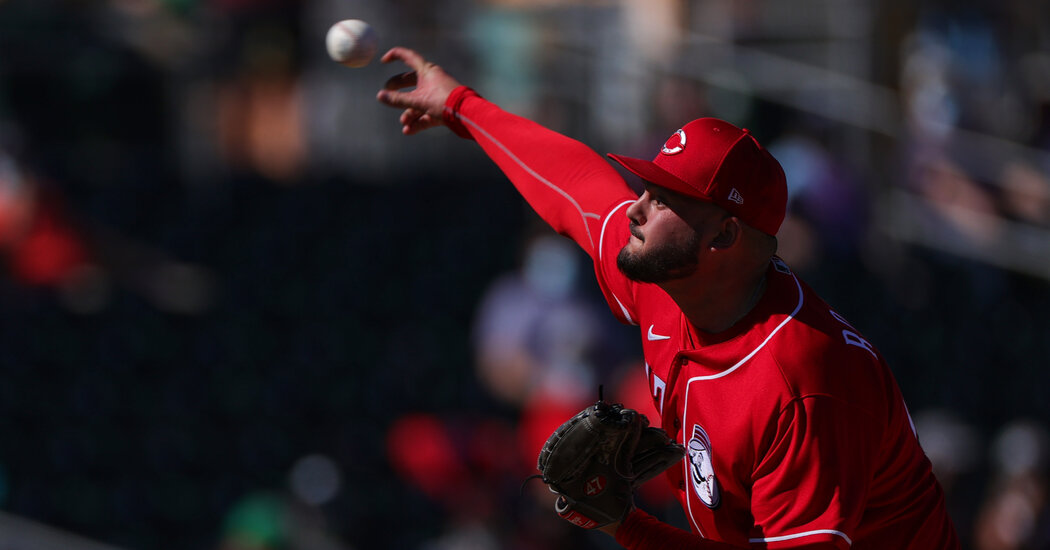 It was the fourth inning of a spring training game between the Reds and the Athletics on Monday, and Sal Romano was in trouble.

Romano had given up four hits to the A’s in the inning, and three runs had scored. After a walk, there were Oakland base runners on first and second, and it seemed still more runs could be on the way.

Instead, the inning was stopped, and the A’s were called back to their dugout.

In the next inning, a new Reds pitcher, Shane Carle, fared no better. He gave up four runs, and put runners on second and third with one out. Once again a big inning seemed to be turning in to a really big inning for the A’s.

And once again the inning was halted.

Romano and Carle were both saved by the major league pitcher’s new best friend: the pitch count. Strange scenes like the one in the Reds-A’s game in Mesa, Ariz., have occurred in several major league spring training games over the last two days because of a new rule that allows teams to stop an inning at the end of an at-bat if their pitcher has thrown 20 pitches, regardless of where the inning stands.

The rule saved Orioles pitcher Thomas Eshelman in a rough first inning against the Pirates on Sunday, and did the same for Red Sox starter Garrett Richards against the Braves on Monday

The pitch count is only the most jarring of a series of new rules being put in for the first weeks of spring training this season. Games are initially being scheduled for seven innings, but teams may agree to play as few as five. On Monday, there was a five-inning game between the White Sox and Angels, plus games of six, seven, eight and nine innings.

The changes are not universally popular, even among baseball people. “Now we’re going to play five and six and seven inning games,” said Dayton Moore, the Kansas City Royals general manager. “We’ve got 75 players in camp and 41 of them are pitchers. We’re trying to get them innings and develop them, but we’re not getting them a chance to, and the fans don’t know if they’re coming to watch a five-, six-, seven- or nine-inning game the first two weeks.”

Sometimes, the teams don’t even know. On Sunday, the Royals played a six-inning game against the Rangers and then, after Texas called it a day, played three more intrasquad innings of Royals vs Royals.

No one who goes to spring training is under the illusion that the games matter in any real sense. But the new rules continue to push the games, for which newly returning fans are paying admission, further and further away from traditional contests and closer to glorified practices.

The pitch-count rules are designed primarily to protect pitching arms in the early days of the season. “The fans will be scratching their heads at times,” the Brewers pitching coach Chris Hook told MLB.com. “But for us, on our side, it’s going to be really helpful in getting our guys ready for the season.”

Innings need not end after 20 pitches, either; the decision belongs to the pitching team. Although it would be to their competitive detriment, a team may choose to keep an inning going after 20 pitches, perhaps to give a reliever practice in getting out of a jam. Then the starter can return the next inning, thanks to another new rule that allows pitchers to re-enter games.

The coronavirus pandemic also influenced the rule. With more certainty about how many pitchers they will use in a game, teams can limit number of players dressed and in the dugout or bullpen during games.

The rule is being referred to in some places as a “mercy rule,” a reference to the kind of governor on scoring one might see in a lopsided beer-league softball or T-ball game. But that is not quite accurate. There is no mercy being shown when a team hasn’t scored any runs, as happened in the Diamondbacks-Rockies game on Sunday.

Zac Gallen pitched the first inning for the Diamondbacks. But with two out and two men on, but no runs scored, he reached 20 pitches. It was time for what many players are calling “rolling the inning.”

Gallen ended the day with two scoreless innings for Arizona. The base runners in the first inning ended up with a walk to the dugout instead of a chance to reach home plate.