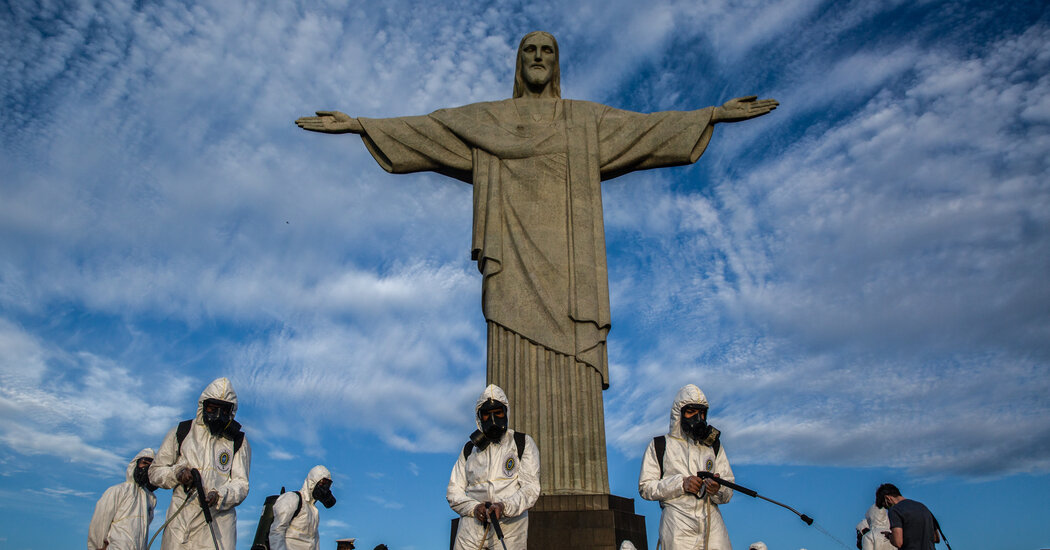 RIO DE JANEIRO — Covid-19 has already left a trail of death and despair in Brazil, one of the worst in the world. Now, a year into the pandemic, the country is setting another wrenching record.

No other nation that experienced such a major outbreak is still grappling with record-setting death tolls and a health care system on the brink of collapse. Many other hard-hit nations are, instead, taking tentative steps toward a semblance of normalcy.

But Brazil is battling a more contagious variant that has trampled one major city and is spreading to others, even as Brazilians toss away precautionary measures that could keep them safe.

On Tuesday, Brazil recorded more than 1,700 Covid-19 deaths, the highest single-day toll of the pandemic.

“The acceleration of the epidemic in various states is leading to the collapse of their public and private hospital systems, which may soon become the case in every region of Brazil,” the national association of health secretaries said in a statement. “Sadly, the anemic rollout of vaccines and the slow pace at which they’re becoming available still does not suggest that this scenario will be reversed in the short term.”

And the news just got worse for Brazil — and possibly the world.

Preliminary studies suggest that the variant that swept through the city of Manaus is not only more contagious, but it also appears able to infect some people who have already recovered from other versions of the virus. And the variant has slipped Brazil’s borders, showing up in two dozen other countries and in small numbers in the United States.

Although trials of a number of vaccines indicate they can protect against severe illness even when they do not prevent infection with the variant, most of the world has not been inoculated. That means even people who had recovered and thought they were safe for now might still be at risk, and that world leaders might, once again, be lifting restrictions too soon.

“You need vaccines to get in the way of these things,” said William Hanage, an epidemiologist at Harvard T.H. Chan School of Public Health, speaking of variants that might cause reinfections. “The immunity you get with your cemeteries running out of room, even that will not be enough to protect you.”

That danger of new variants has not been lost on scientists around the world. Rochelle Walensky, the director of the U.S. Centers for Disease Control and Prevention, pleaded with Americans this week not to let their guards down. “Please hear me clearly,” she said. “At this level of cases with variants spreading, we stand to completely lose the hard-earned ground we’ve gained.”

Brazilians hoped they had seen the worst of the outbreak last year. Manaus, capital of the northern state of Amazonas, was hit so hard in April and May that scientists wondered if the city might have reached herd immunity.

But then in September, cases in the state began rising again, perplexing health officials. An attempt by Amazonas governor Wilson Lima to impose a new quarantine ahead of the Christmas holiday was met with fierce resistance by business owners and prominent politicians close to President Jair Bolsonaro.

By January, scientists had discovered that a new variant, which became known as P.1, had become dominant in the state. Within weeks, its danger became clear as hospitals in the city ran out of oxygen amid a crush of patients, leading scores to suffocate to death.

Doctor Antonio Souza remains haunted by the horrified faces of his colleagues and relatives of patients when it became clear his Manaus hospital’s oxygen supply had been exhausted. He thinks about the patient he sedated, to spare her an agonizing death, when the oxygen ran out at another clinic.

“Nobody should ever have to make that decision,” he said. “It’s too terrible.”

Maria Glaudimar, a nurse in Manaus, said she felt trapped in a nightmare early this year with no end in sight. At work, patients and their relatives pleaded for oxygen and all the intensive care beds were full. At home, her son caught tuberculosis after contracting Covid-19 and her husband shed 22 pounds as he fought the virus.

“No one was prepared for this,” Ms. Glaudimar said. “It was a horror film.”

Since then, the coronavirus crisis has eased somewhat in Amazonas, but worsened in most of Brazil.

Scientists have scrambled to learn more about the variant and to track its spread across the country. But limited resources for testing have kept them behind the curve as they try to determine what role it is playing.

Anderson Brito, a Brazilian virologist at Yale University, said his lab alone sequenced almost half as many coronavirus genomes as all of Brazil had. While the United States has done genetic sequencing on roughly one in 200 confirmed cases, Brazil sequences about one in 3,000.

The variant spread quickly. By the end of January, a study by government researchers found it was present in 91 percent of samples sequenced in the state of Amazonas. By the end of February, health officials had reported cases of the P.1 variant in 21 of 26 Brazilian states, but without more testing it is hard to gauge its prevalence.

Throughout the pandemic, researchers have said that Covid-19 reinfections appear to be extremely rare, which has allowed people who recover to presume they have immunity, at least for a while. But that was before P.1 appeared and doctors and nurses began to notice something strange.

João Alho, a doctor in Santarém, a city in Pará, a state that borders Amazonas, said that several colleagues who recovered from Covid-19 months ago had fallen ill again and tested positive.

Juliana Cunha, a nurse in Rio de Janeiro who has been working at Covid-19 testing centers, said she assumed she was safe after catching the virus last June. But in November, after experiencing mild symptoms, she tested positive again.

But there is no way to be sure what is happening to people who are reinfected, unless both their old and new samples are kept, genetically sequenced and compared.

One way to tamp down the surge would be through vaccinations, but the rollout in Brazil, as in so many countries, has been slow.

Brazil began vaccinating priority groups, including health care professionals and the elderly, in late January. But the government has failed to secure a large enough number of doses. Wealthier countries have snapped up most of the available supply, while Mr. Bolsonaro has been skeptical both of the disease’s impact, and of vaccines.

Just over 5.8 million Brazilians — roughly 2.6 percent of the population — had received at least one dose of a Covid-19 vaccine as of Tuesday, according to the health ministry. Only about 1.5 million had received both doses. The country is currently using the Chinese-made CoronaVac — which laboratory tests suggest is less effective against P.1 than against other variants — and the one made by the British-Swedish pharmaceutical company AstraZeneca.

Other countries should take heed, said Ester Sabino, an infectious disease researcher at the University of São Paulo who is among the leading experts on the P.1 variant.

“You can vaccinate your whole population and control the problem only for a short period if, in another place in the world, a new variant appears,” she said. “It will get there one day.”

Health minister Eduardo Pazuello, who called the variant a “new stage” of the pandemic, said last week that the government was ramping up its efforts and hopes to vaccinate roughly half of its population by June and the rest by the end of the year.

But many Brazilians have little faith in a government led by a president who has sabotaged lockdowns, repeatedly downplayed the threat of the virus and promoted untested remedies long after scientists said they clearly did not work.

Just last week, the president spoke dismissively of masks, which are among the best defenses to curb contagion, claiming that they are harmful to children, causing headaches and difficulty concentrating.

Mr. Pazuello’s vaccine projections have also been met with skepticism. The government last week placed an order for 20 million doses of an Indian vaccine that has not completed clinical trials. That prompted a federal prosecutor to argue in a legal filing that the $286 million purchase “puts millions of lives at risk.”

Even if it proves effective, it will be too late for many.

Tony Maquiné, a 39-year-old marketing specialist in Manaus, lost a grandmother, an uncle, two aunts and a cousin, in the span of a few weeks during the latest surge of cases. He says time has become a blur of frantic efforts to find hospitals with free beds for the living, while arranging funerals for the dead.

“It was a nightmare,” Mr. Maquiné said. “I’m scared of what lies ahead.”