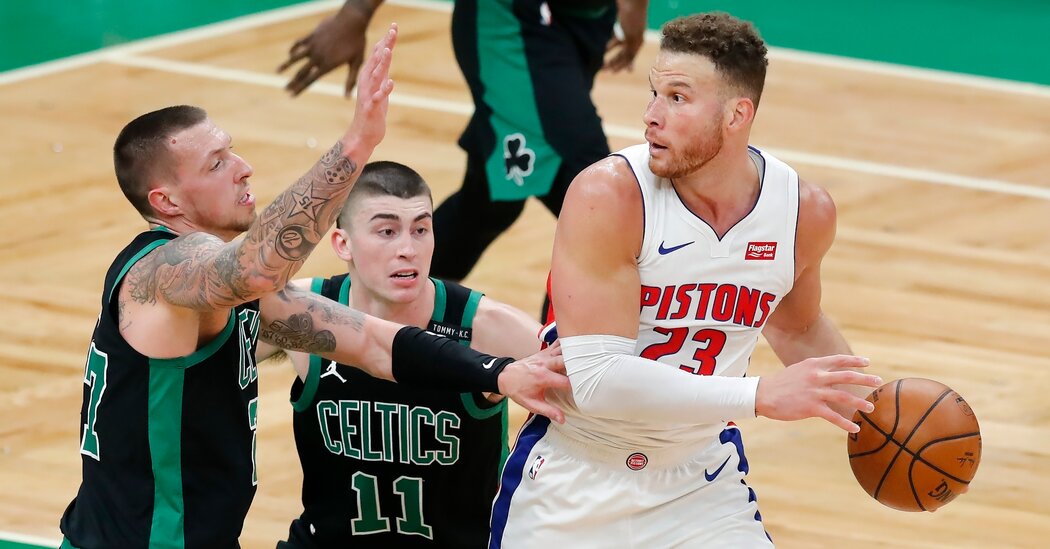 Blake Griffin, a six-time N.B.A. All-Star, is expected to sign a contract with the Nets on Monday, a person familiar with his plans said.

The person spoke on condition of anonymity because they were not authorized to discuss the deal publicly. Griffin became a free agent on Sunday after clearing waivers.

The deal adds another big name to a stacked Nets team, but it also carries some risk. Griffin, 31, had one of the best years of his career in 2018-19, when he made the all-N.B.A. third team, but his production has significantly slipped since then as a result of injuries. This season, Griffin struggled in 20 games for the Detroit Pistons, averaging 12.3 points on 36.5 percent shooting and 5.2 rebounds.

There’s also a question of fit: Griffin’s best attributes have been his scoring and passing abilities. He has never been known as a defender. The Nets are already the best offensive team in the league with three players who dominate the ball: James Harden, Kyrie Irving and Kevin Durant.

Even so, Griffin, if he can recapture any of his play from his All-Star years, will make the Nets even more formidable. The Nets are 24-13 and second in the Eastern Conference behind the Philadelphia 76ers. They have won 10 of their last 11 games.

Griffin was drafted first over all by the Los Angeles Clippers in 2009 but he missed the 2009-10 season because of a knee injury. He then became a sensation known for his high-flying dunks and charismatic personality. He made the All-Star team in his first season and helped revitalize the Clippers. In 2018, after more than seven seasons with the team, the Clippers traded him to the Pistons. This season was Griffin’s fourth in Detroit. The Pistons are rebuilding while Griffin is in the twilight of his career, so the two sides went their opposite ways.

Last season, Griffin played only 18 games because of knee soreness, and his production (15.5 points, 35.2 percent shooting) was well below his career averages (21.4 points, 49.5 percent). This year, though, Griffin has at least appeared healthy but it has not translated to on-court production.

One of the most notable moments of Griffin’s career was a dunk over a car at the 2011 dunk contest. While now a part of N.B.A. lore, it also underscores a truth about Griffin’s career. He dominated in highlight reels especially during the regular season, but hasn’t had much playoff success. He has never been on a team that made the conference finals. Joining the Nets gives him the best opportunity in his career to do so.

“The individual awards and these things are fine, and I’m appreciative of them, but I just want to win,” Griffin said in January. “Not making it to a conference final, yeah, it does gnaw at me. Not to the point where I’m losing sleep over it. But that’s the main goal — I want to win.”