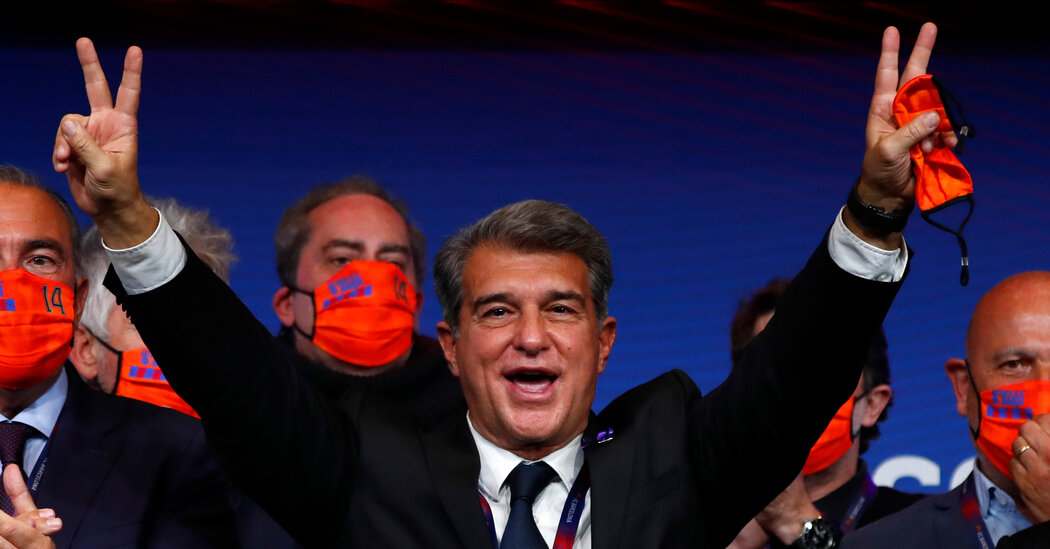 Six days after a police raid on its offices led to the seizure of files and the arrests of four club officials, F.C. Barcelona reached into its past on Sunday to elect Joan Laporta as its new president.

Laporta, a lawyer whose previous tenure as Barcelona’s president coincided with Lionel Messi’s debut with the club, and ushered in an era of on-field and commercial success, defeated two rivals in what he labeled “the most important elections in the history” of Barcelona, one of Europe’s most decorated soccer clubs.

He received more than 50 percent of the vote, defeating his closest rival, 54.2 percent to 29.9 percent. But Laporta’s reward — a billion-dollar organization facing tough decisions about some of its most popular players, a looming financial crisis made worse by the coronavirus pandemic and the potential loss of its best player — hardly seems like a prize.

The most immediate challenges he faces are navigating the biggest debt crisis in European soccer, currently more than $1.3 billion; lowering the team’s salary bill, at the moment the highest in Europe; and avoiding the loss — perhaps as soon as this summer — of Lionel Messi. Laporta was Barcelona’s president when Messi made his debut for the club more than a decade ago; now, it will be up to him to persuade him to stay.

“Lionel Messi loves Barça,” Laporta said in his first remarks to supporters, leaving little doubt that he considers cementing Messi’s future at the club his top priority. “We are a big family, a big club with the best player.”

Perhaps an even more important task, however, will be uniting a club once revered for elevating modern soccer into high art out of an era of infighting, dirty tricks and red ink. The series of unfolding crises have turned Barcelona from a model of commercial and sporting success into, at times, the punchline of a bad joke.

“We want the joy and happiness to be back in this club,” Laporta said, adding in a direct appeal to members, “The best thing you can do for Barça is to love it.”

Laporta’s predecessor, Josep Maria Bartomeu, resigned in October, just ahead of a vote to remove him. By then, more than 20,000 of Barcelona’s 140,000 members had turned in hand-signed forms seeking his ouster, and last week he was detained by the police as part of its investigation of the team’s internal affairs.

But on Sunday, Bartomeu still lined up — along with everyday fans, team executives, former players and coaches, and even a handful of members of the current first team, including Messi — to cast his presidential vote. Even amid the team’s turmoil, the turnout represented the kind of quaint, one-fan-one-vote ethos on which Barcelona prides itself.

The election had been delayed by the ongoing repercussions of the pandemic. Restrictions on mass gatherings required Barcelona to change its voting process by spreading polling stations across Catalonia, and by allowing mail-in ballots for the first time in its history. But thousands of the club’s members still turned up in person to cast their votes during the 12 hours allotted for the balloting on Sunday.

The club said more than 55,000 votes were cast by members who chose not only a new president but also board members who will serve until 2026. Even before the final ballots were counted, the two other candidates, the runner-up Victor Font and Toni Freixa conceded. In video broadcast on the club’s television network, Font and Freixa congratulated Laporta and hugged him in a show of unity.

“I want to congratulate Laporta for this victory, which does not allow for any discussion,” Freixa said. “We must now support our president.”

In picking Laporta, Barcelona members opted for a candidate who many remember fondly from his previous term. As Barcelona’s president from 2003 to 2010, he ushered in the start of a golden decade of success for the century-old club.

His signature decision, elevating the untested Pep Guardiola from his role as coach of Barcelona’s B team to take charge of the first-team squad in 2008, proved to be a masterstroke. Guardiola rebuilt Barcelona around homegrown talents, including Messi, and combined them with established stars to produce a brand of soccer that captivated audiences around the world. The club collected more than a dozen trophies under Guardiola, including three Spanish titles and two victories in the Champions League, European soccer’s richest and most prized club competition.

With the current team viewed as aging and below the club’s standard, Laporta will be expected to guide a similar revival. But this time, the outlook is bleaker than ever.

More recently, Barcelona has become synonymous with negativity, with the bad news arriving in waves. Since June, the team has had to contend with the outsized impact the coronavirus has had on its finances; a scandal involving a club-financed social-media campaign that targeted Bartomeu’s rivals, including several popular players; a humiliating Champions League exit; a public falling out between Messi and Bartomeu that almost led to Messi’s departure before the season; and then, most recently, last week’s raid on Barcelona’s offices that resulted in the arrests of four team officials.

With Barcelona facing the most urgent short-term debt crisis in European soccer, the new president immediately faces the twin challenges of keeping the club afloat while also following through on promises to keep it competitive with not only domestic rivals like Real Madrid and Atlético Madrid but also deep-pocketed foreign challengers like Manchester City, Paris St.-Germain, Liverpool, Chelsea and Manchester United, many of them bankrolled by Gulf nation states, Russian oligarchs or American billionaires.

As a member-supported club, Barcelona does not have that luxury. Laporta will have to decide whether or not to forge ahead with a plan put together by the club’s executive team and Goldman Sachs to raise 250 million euros (almost $300 million) by selling a basket of club-owned assets to external investors. The move would be unusual and likely contentious — and it would require the backing of a membership fractured by the recent crisis.

The new board also will need to recalibrate supporter expectations, and reverse course from a management style — including by Laporta during his previous tenure — that has drawn criticism for prioritizing short-term rewards, in the form of lavish spending and popular (and expensive) signings, over long-term financial stability.

He will also have to restore the club’s battered reputation. At a sports business conference hosted by the Financial Times last month, Christian Seifert, the chief executive of Germany’s Bundesliga, took aim at Barcelona and its rival Real Madrid for their spending habits. “These so-called superclubs are in fact poorly managed, cash-burning machines that were not able, in a decade of incredible growth, to come close to a somehow sustainable business model,” Seifert said.