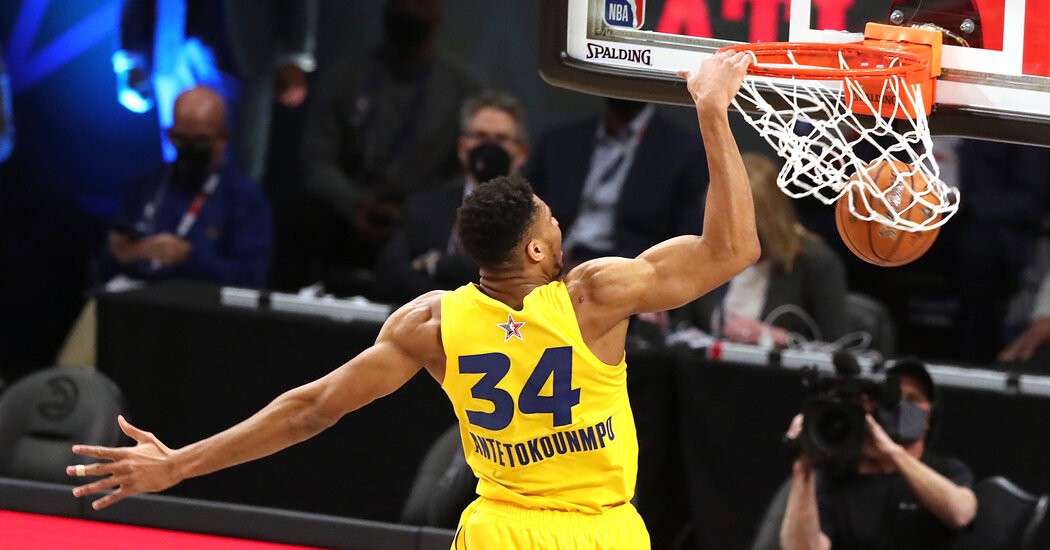 ATLANTA — Giannis Antetokounmpo of the Milwaukee Bucks unintentionally banked in two of his three 3-pointers. He took 11 shots in the first half, and five more in the second half, without missing one. He also made a priceless memory with his infant son before the game even started, leaning down to Liam Antetokounmpo at courtside for some quick ball handling work as the opening tip approached.

When the N.B.A.’s 70th All-Star Game was over Sunday night, Antetokounmpo seized the game ball without waiting for anyone’s authorization, cradled it with his left hand and collected the Kobe Bryant Trophy as the occasion’s Most Valuable Player minutes later. It was, at least for Antetokounmpo, about as perfect as an All-Star Game gets.

That the sentiment could be applied to even one participant at State Farm Arena was a grand surprise given how the N.B.A.’s All-Star Sunday started. Weeks of unease and second-guessing about the league’s decision to summon 24 players from 18 teams to Georgia for an All-Star Game, in the ongoing clutches of a pandemic that caused 31 game postponements in the first half of the season, seemed to be validated some eight hours before tipoff, when it was announced that Joel Embiid and Ben Simmons of the Philadelphia 76ers would not be allowed to play.

Exposure in Philadelphia to a barber who had tested positive for Covid-19 caused Embiid and Simmons to be barred from playing, even though their coach, Doc Rivers, said both players tested negative on Sunday in Atlanta. League officials thus had to be relieved, at night’s end, to see Antetokounmpo so giddy about his 35 points on 16-for-16 shooting — albeit almost all of that from at-the-rim range — and to hear the Los Angeles Lakers’ LeBron James speaking so excitedly about the rare opportunity to play beside Golden State’s Stephen Curry.

As the captain of the victorious Team LeBron, James benched himself for the second half of a 170-150 victory after scoring a modest 4 points in 13 minutes. He spent the rest of the evening encouraging Portland’s Damian Lillard (32 points) and Curry (28) to “back up further and further to shoot,” as James explained via his Twitter feed. Lillard and Curry duly drained eight 3-pointers each, including back-to-back flings from half-court to close out a 60-point second quarter (yes, sixty) that looked laughably effortless.

It was a marked change in tone from the afternoon, when the Nets’ James Harden, among numerous players dismayed by the Embiid and Simmons developments, said this All-Star Game had essentially been “thrown upon us.” James, remember, called the concept a “slap in the face” a month ago, explaining that he and many other players had been led to believe they would get an All-Star break free of basketball after the league postponed its originally scheduled 2021 All-Star Weekend in Indianapolis to 2024.

The uniforms used Sunday night were those designed for Indianapolis, inspired by an old Pacers scheme from the 1980s in yellow and blue, adding to the night’s “forced” feel — to use another Harden description. No matter how many times N.B.A. commissioner Adam Silver has insisted that the league’s motivations for staging the game were to reward its global fan base and bring a needed spotlight to historically Black colleges and universities, as much as the obvious “economic factors,” this was one instance where players voiced more (and louder) skepticism than members of the news media.

“All in all, obviously the league did a hell of a job of being able to put this together still,” James said afterward, withholding any further criticism. He had just improved to 4-0 as an All-Star captain, helped along by the stunning array of M.V.P. candidates he drafted (Antetokounmpo, Curry, Lillard, Denver’s Nikola Jokic and Dallas’s Luka Doncic), as well as the absences of Embiid and the injured Captain Durant.”

There’s always a lot of back and forth on these different decisions, but once guys get here, I think they’re grateful for it,” said Chris Paul of the Phoenix Suns. Paul, of course, doubles as the president of the National Basketball Players Association and James’s close friend, which made for an uncomfortable month after James was so forceful in initially questioning the wisdom of holding even this scaled-down version of All-Star Weekend.

To try to make this venture as safe as possible, league and union officials agreed that the players would spend no more than 36 hours in Atlanta, flying in and out via private jet and maintaining the daily coronavirus testing that has governed the season so far. Traveling parties were required to check into the league’s official hotel downtown by 7 p.m. on Saturday and then stay at the hotel until departing for the arena Sunday afternoon, with an array of private postgame flights scheduled Sunday night. Players were allowed to bring up to four guests. Teams were allowed to send just three club representatives with them — one each from the athletic training staff, team public relations and team security.

The idea, Silver said, was to create a “mini bubble” and keep everyone granted access to the league’s inner sanctum away from the bustling nightlife that swirled around them. League officials were well aware that many Atlantans had shown little interest in heeding recent pleas from Mayor Keisha Lance Bottoms to stay home and treat this as the made-for-television event that the N.B.A. intended. The N.B.A., in fact, was moved to send roughly 200 letters containing cease-and-desist orders to local party organizers who used the event name or logo to promote unaffiliated events across the weekend, according to a league spokesman.

Beyond the $20-plus million that Turner Sports was projected to generate in advertising and sponsorship revenue through Sunday’s broadcast, estimates for precisely how valuable this substitute All-Star experience would be for the N.B.A. have been difficult to come by. It was widely reported late last year that starting the 2020-21 season during Christmas Week rather than mid-January would result in a $500 million revenue gain. No such projections have been released in connection with All-Star, but one league insider with a firm grasp of money matters told me last week that just keeping a valuable partner like Turner happy, by preserving the network’s most valuable N.B.A. content of the year, was worthy of any trouble.

Fake crowd noise was constantly pumped in to amplify the understandably modest buzz generated by an invite-only crowd of 1,500. TNT likewise had concerns of its own to contend with, competing for viewers against Oprah Winfrey’s blockbuster interview on CBS with Prince Harry and his wife, Meghan Markle.

Silver insisted at a news conference on Saturday that he had weighed it all before deciding that “we should do it for our fans and for our business” once the league “got to the point where we felt we could do it safely.”

“For me,” Silver said, “it would have been a bigger deal not to have it.”

Atlanta’s previous All-Star Game in 2003, when the Hawks’ home was known as Philips Arena, was Michael Jordan’s final All-Star Game. This one will take its own place in league history, thanks to the unprecedented circumstances, but Silver proposed that “maybe it should be judged when people are looking back as to what this meant to them as opposed to what some of the initial reactions were.”

“It was more fun than I thought it would be,” Boston’s Jayson Tatum said.

Said Lillard, who on another night might have wrested M.V.P. honors from Antetokounmpo with his repeated splashes from 40 feet and beyond: “It just didn’t have the All-Star Weekend feel, just because it was so quick, it was so quiet, it was empty. But I think once we got on the floor, that was like the only time it snapped into like, ‘This is the All-Star Game.’ ”